The global death toll in the COVID-19 pandemic has passed 475,000, and the confirmed cases are now more than nine million worldwide. But there's another number that looms: fear of the pandemic's second wave striking countries in the coming weeks and months. Already, clusters of new outbreaks of cases have appeared in countries such as China, South Korea and Germany that thought they had put the pandemic to rest.

Indeed, there is only one way to truly vanquish that spectre: a vaccine. The race for the successful development, testing and distribution of a vaccine has been on for months, bringing in private pharmaceutical giants, national health agencies and global bodies including the World Health Organization.

• "End of the year" hopes: For Dr. Anthony Fauci, U.S.'s top medical expert, a vaccine is a matter of "when and not if." Fauci told Congress yesterday that though its development might take some time, he remained "cautiously optimistic," predicting that a vaccine could be available as soon as the end of this year, or the beginning of 2021. In his written testimony, Fauci listed key vaccines in development, including a potential candidate developed in partnership with biotech Moderna, expected to begin late-stage testing in July.

• How to go faster: In a article published in the scientific journal Vaccine, ominously titled "Extraordinary diseases require extraordinary solutions", two U.S. researchers insist on the need to accelerate the vaccine development process, which they argue "normally takes months to years," during which the virus will have time to infect and possibly kill millions. They therefore suggest "moving quickly through animal studies and doing human challenge studies in volunteers" by inoculating the virus to volunteers. "The ethics of such trials," the two researchers add, "as well as their acceptability to regulators as a step towards emergency use of a candidate vaccine are foremost and require immediate discussion." 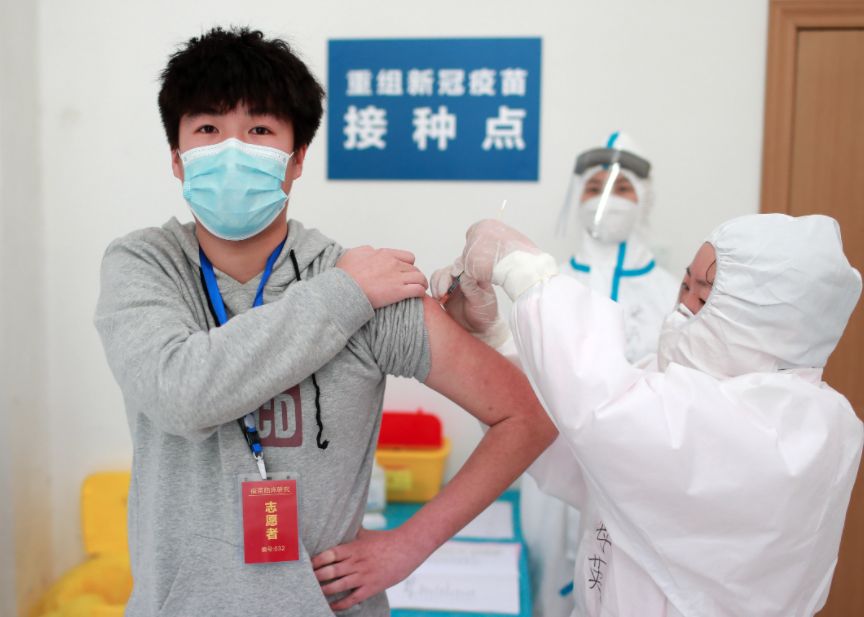 Volunteer getting vaccinated in Wuhan on April 20 — Photo: TPG/ZUMA

• Calculated risk: These so-called "infectious human challenges", which involve the deliberate exposure of human volunteers to infectious agents, are not something new per se. As Le Monde notes, they were implemented before in the fight against the flu, cholera, malaria, dengue — but as the French daily notes, they still pose the ethical question: Is it OK to intentionally harm a patient? It is, according to Nir Eyal, Marc Lipsitch and Peter Smith. In The Journal of Infectious Diseases, the three U.S. doctors favor such controlled infection trials, as long as the volunteers express their full consent, and that the selection of participants (healthy young adults) helps limit the risks.

• UK rolls out innovative human trials: About 300 volunteers will be immunized over the coming weeks, as part of a trial led the Imperial College London. The BBC notes that while traditional vaccines are usually based on a modified form of the virus they seek to combat, here the vaccine uses synthetic strands of genetic code (called RNA) that mimic the virus.

• China giving its all: Beijing-based China National Biotec Group was just given the greenlight for the final stage (Phase III) of human trials for its COVID-19 vaccines in the United Arab Emirates. The company will partner with G42, an Abu Dhabi company specialized in AI and cloud computing, to conduct the trial and start local production of the vaccine. This is but one of the five different vaccine development projects China is leading right now.

• Dissenting voice: Not all are running the vaccine race. French microbiologist and hydroxychloroquine guru Didier Raoult recently told Le Parisien he thought it was "unlikely" that a vaccine would soon be available. "There isn't any against emerging diseases, despite the billions spent," he observed, before adding: "But I'm not saying it won't happen."

Technological progressions have always changed how we behave. But AI has much more far-reaching p...