A couple kisses through a plate of glass. - —Thought Catalog

For some, France's strict shelter-in-place period sank their relationships. Others say it helped. Either way, couples in the would-be land of romance found themselves at a real crossroads.

PARIS — There's something to be said about having "quality time" as a couple. But there's also such a thing as too much togetherness, as countless couples discovered during France's two-month, coronavirus lockdown. And while some relationships fared better than others, the shelter-in-place period was no walk in the park for anyone. As the award-winning novelist Jean-Paul Dubois puts it: "It's not enough just to talk. Couples also need to get along."

Still, some people look back on the lockdown as a real boost for their relationships. Olivier, a Parisian in his 60s, describes the time spent with his partner, in their apartment along the Saint-Martin Canal, as a time of "celebration" for their relationship. "It confirmed a very strong feeling, that after 40 years of love, we are really meant to be together."

The couple realized how much their bond is based on shared tastes, and the fact that they both have an optimistic outlook and something of a hedonistic streak. "It's all a question of balance and listening to each other," he adds. "I went out every day during the confinement to do the shopping and go for a walk, as opposed to my companion who ventured outside only twice. In those times, it's really a privilege to be in love and to get along so well to thwart the surrounding atmosphere."

According to a survey done for the charles.co website by the IFOP marketing and research institute, 60% of French couples say they have not been affected by quarantine, while 30% even believe that this period has brought them closer together.

One couple out of 10, on the other hand, say that they grew apart. And for 4% of couples, the lockdown was a full-on relationship killer. This was especially true among the younger generation, for whom it was often their first experience living together. More surprisingly, one person in 10 say they wouldn't want to be confined again with the same partner, and 8% say they'd prefer to be alone. Also, the proportion of people who say they're "very satisfied" with their relationship decreased by seven percentage points during confinement.

Hannah, a young woman from Bordeaux, had some difficult moments too, but is actually nostalgic for the quarantine period. She's been in a relationship for three years with a restaurant owner, who usually works very long hours. The lockdown, therefore, gave the couple time together that they'd previously lacked.

"I was so happy," she recalls. "Usually I have the impression that he escapes from me and that for him our relationship comes second. He was finally emotionally present, even though he was restless." For Hannah, the end of the lockdown was actually disappointing in some ways.

"The mental burden was very heavy."

Not that it was all fun and games. Arguments got a bit heated at times, and her boyfriend would even go sleep, at such moments, in his workplace. But the couple also took important steps together, like adopting a kitten — a symbol of a future family life.

"His workload will be worse in the coming months to make up for the limited cash flow and that saddens me," Hannah explains. "It was a very serene interlude that ended as soon as it started."

For other couples, however, there was nothing particularly calm about the lockdown, especially when it came to the issue of dividing up tasks and responsibilities.

"The mental burden was very heavy," says Arianne, mother of an 11-month-old daughter. "My partner and I both have jobs with responsibilities, but I was taking care of everything and I was exhausted. I think he didn't realize what I was going through on a daily basis. Even today, I still find it hard to get out of confinement because there aren't a lot of spots in the nurseries. I really need some time for myself." 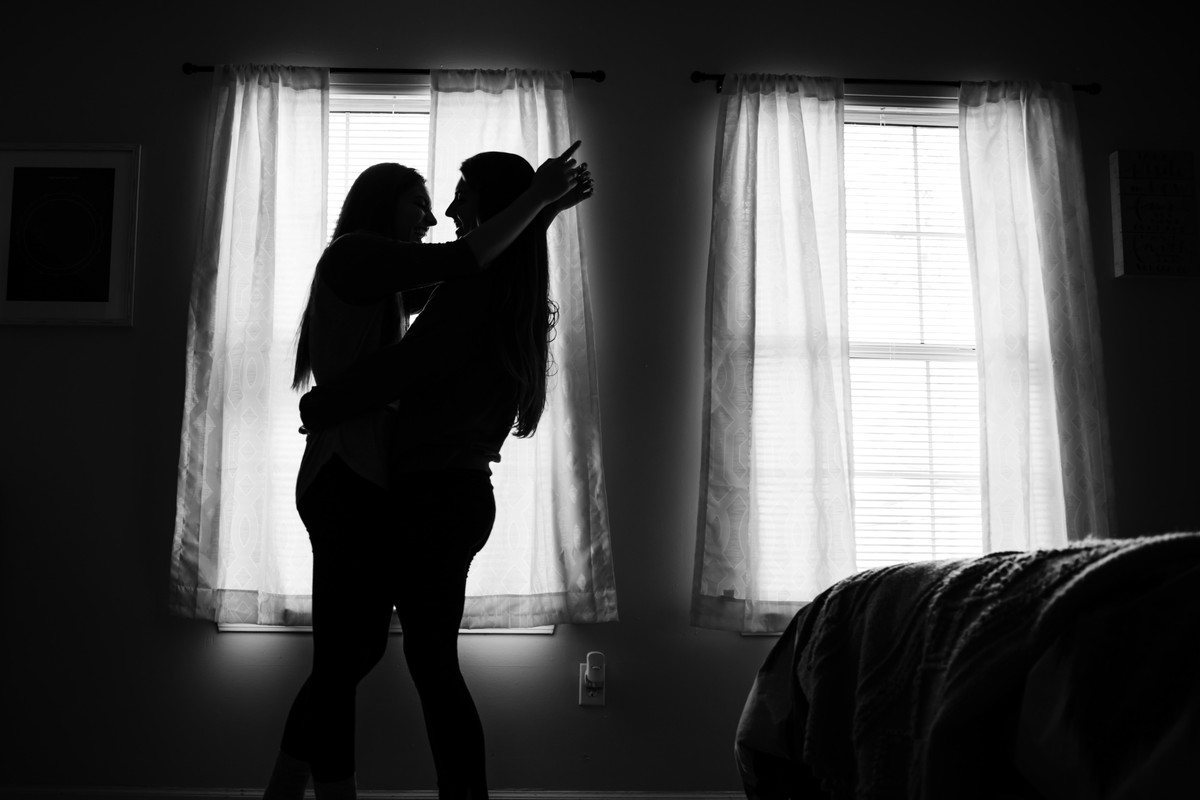 A silhouette of a couple embracing — Photo: Arren Mills

All of the struggles aside, 88% of respondents to the IFOP survey say they'd go into quarantine again with the same partner, and unlike in China or Spain, France hasn't been awash in a wave of divorces. Still, the fact remains that a tenth of couples experienced a very complicated situation in self-isolation, which only exacerbated unspoken and unresolved past conflicts.

Such was the case for Clara, a 30-year-old sales engineer. "My companion of several months was only partially employed while I worked full time, and that quickly created frustration and embarrassment for him," she says. "I was intellectually busy while he tried to fill his time every day. And then getting out of quarantine highlighted all our problems, from the sex to the dishonesty."

Clara explains that she felt doubly confined, stuck physically in a small Parisian apartment, and also psychologically. I felt trapped in this relationship that oppressed me," she says. She felt so cornered, in fact, that after a month she left to join her family in Normandy, just to get some fresh air and take stock of things.

A lot of other couples suffered in similar ways, and in some cases relationships took an even darker turn. In France and across Europe, there was a marked increase during the quarantine period in domestic violence complaints. As sociologist and best-selling author Jean-Claude Kaufmann explains: "It was all the more difficult for these people to get psychological help or to emancipate themselves from the couple's bubble."

But there were also hopeful stories that came out of this time. Tifaine was locked down in France while her boyfriend waited for her in Sicily. This forced distance has made them want to never be separated again. "As soon as the borders reopen, we're going to live together in Italy," she says. "I have the feeling that I am much closer to him, that we have had very deep conversations, which we would probably never have had so soon."

Camille, a student in Lyon, also saw the lockdown as benefiting her relationship, even though she sheltered in place not only with her partner, but also with his family, in Thonon-les-Bains, on the shores of Lake Geneva. "In the two and a half years of our relationship, we had never spent so much time side by side. And to our great surprise, we set up a long-term professional project, even though we were convinced that we would never succeed in working together," she says.

But how will this crisis impact the future of relationships or our vision of life together?

This coming from a woman who initially wanted to quarantine herself with friends on a boat. "Today, I feel like I'm really part of their family; it's rare to know so much about your partner's parents, especially at my age," Camille adds. The young woman has even extended her stay with her in-laws, suffering neither from a lack of privacy nor a need to "get back to reality."

But how will this crisis impact the future of relationships or our vision of life together? "It all depends on the months ahead," says Jean-Claude Kaufmann. "We're in a period of flux, of general slowdown. If the economy doesn't collapse, if we don't enter an even more serious crisis, all this will only have been a blip. But this really is a fork-in-the-road moment for many couples who, during this quarantine, have imagined multiple scenarios, such as buying a house in the country. For two months, many people were in a kind of waking dream, giving free rein to their fantasies, to thinking about their future together."

This celebration of life together has, paradoxically, reinforced feelings of loneliness among many single people who quarantined alone for two months. In a society where being in a couple is the norm, this period may have exacerbated the desire to enter a partnership with a "dream figure," says Kaufmann.

Many French people have turned to dating apps, particularly Tinder, which recently had a new one-day record of more than 3 billion swipes. One of those swipers is Caroline, who says she's very eager right now to get into a relationship.

"As early as May 11, I sent a message to a man I liked to make sure I was the first person he saw after quarantine," she says. "I suspected that he had spoken with a lot of girls during those two months."

But what about that first kiss, in the midst of the global pandemic, when you don't know the exposure risk of the person you are talking to? "Our contemporary societies are marked by a deep fear of commitment, a fear of losing control when everything encourages us to be constantly in control of ourselves," says Kaufmann.

"The fear of contracting the virus only adds to this initial apprehension," the sociologist adds. "Since the beginning of the health crisis, we have been in the process of protecting ourselves from others, which is the opposite of a healthy relationship. For a couple to build a successful partnership, we must let go and give up everything."

That means getting off Tinder and going to meet people in person. Yes, there's a risk, but that, in Kaufmann's opinion only makes things more intense. "Going to meet someone becomes a transgression, something that's all the more adventurous," he says.