Sports are an important part of the fabric of local communities as well as a multi-billion dollar global industry, and their absence in recent months has been conspicuous.

The coronavirus pandemic shut down both professional and amateur athletes around the world, forcing viewers to watch replays of old championship matches and limiting weekend warriors to stationary bikes and living room jumping jacks.

But now, as social distancing restrictions begin to lift, the wonderful world of sports is coming back to life, though often with some major changes to limit risks of reigniting an outbreak:

SOCCER IN GERMANY: After a two-month coronavirus hiatus, Germany's top-division soccer league, the über popular Bundesliga soccer league, has once again opened its doors, albeit only to players and other team personnel. As far as professional soccer goes, Bundesliga has the highest average stadium attendance worldwide, and among the major European leagues, it's the first to resume its season. Still, it's fairly obvious that this season will be far from conventional.

• On the field: There is to be no more than 213 people per game, including the players and staff, inside the stadiums. Players will remain between barriers when off the field, will wear masks when on the benches, and all celebrations are to be non-contact. Supporters of the sports league's re-opening in Europe have also become ardent critics of the games taking place in empty stadiums. To remedy this, the network Sky Germany has been broadcasting games, like the recent match between Eintracht Frankfurt and Borussia Mönchengladbach, with the addition of live mixes of pre-recorded background noises. A quick remedy for crowdless games moving forward, but not without challenges of their own.

• In the stands: As part of a charity campaign, fans of Borussia Mönchengladbach had the rare opportunity of filling up the Borussia-Park stadium with over 12,000 cardboard cut-outs of themselves. Before the outset of the virus, the fifth largest stadium in the league had been full for most of the season to its capacity of 54,014 people. To "attend" games now, they can contribute to the "Stay at home, Be in the Stands" campaign where their donations earn them a cardboard cutout of themselves in the stands while also supporting local charities. And yes, your cardboard cutout can root for the rival team too. 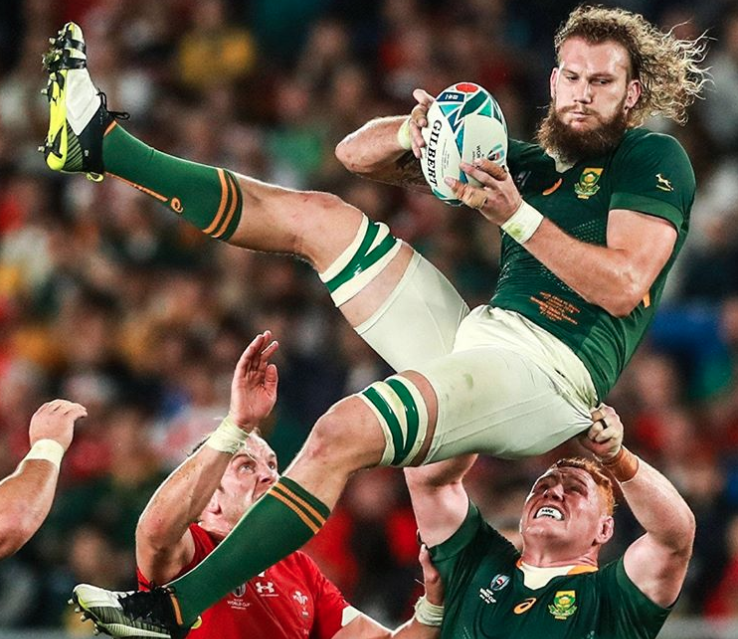 RUGBY IN SOUTH AFRICA: As South Africa begins to ease its coronavirus lockdown restrictions even further this week, many are awaiting the return of rugby. This year's season ground to a halt mid-March, with all club and national matches postponed indefinitely by World Rugby.

• Despite the popularity of the sport and the return to competition in New Zealand and Australia, the South African government announced Saturday that it would be maintaining its current ban on contact sports. According to the country's sports minister, Nathi Mtethwa, non-contact professional sports like golf, tennis and cricket, may resume competition in some regions without spectators.

• Contact sports like rugby require major changes before they can begin to train again, let alone compete. Over the next two weeks, each rugby team will be detailing its plans and protocols, such as mandatory screening of athletes, that must be approved by the state to begin holding practices.

• According to Jurie Roux, South Africa Rugby CEO, while the sport may not be considered an "essential business" by the government, fans surely feel otherwise. "We do not run hospitals or build ventilators and we are not an industry that is critical to the South African economy, but we do believe that we add huge value to national life in other ways."

TENNIS, EVERYWHERE: Tennis may seem like the perfect sport in pandemic times, with both players keeping at a respectable social distance from either side of the net. But that's only true for the two competitors — not for the thousands of people usually in attendance. This is how the tennis world reacted:

• In early March, the governing bodies of both women and men's tennis associations decided to cancel all professional tennis matches until July 13. Wimbledon? Canceled. The French Open? Postponed until September or October. The Indian Wells and Rome tournaments? Unclear.

• All hope may not be lost for tennis fans this summer though, as the U.S. Open has (so far) been rescheduled for mid-August. Organizers of the event will still have to decide whether the event can take place as usual in New York, which has been hit extremely hard by the coronavirus.

• In the meantime, to support the players financially affected by the canceled tournaments, the governing bodies of world tennis have created the "player relief program," a fund that aims at helping out hundreds of low-ranked players, depending on how much they depend on tournament earnings. The fund was not met with universal acclaim among top-ranked players, with Austria's Dominic Thiem voicing his doubts as to the fairness of the program.

• Tightly-controlled exhibition matches have restarted in Germany and the Czech Republic, with similar events expected in London and West Virginia in the summer. On the menu: No fans, no ball boys or girls, no line judges, no shaking hands … Basically two players, one chair umpire, two rackets and a ball!