In Egypt, A Scramble To Keep Factory Workers Safe

Workers in a factory that produces face masks in Monufia, Egypt, - Xinhua/ZUMA

From schedule changes and face shields to full operational shutdowns, the pandemic has directly impacted the country's industrial sector.

10TH OF RAMADAN CITY — As the novel coronavirus makes its way through Egypt, some factories — including a La Vache Qui Rit (The Laughing Cow) processed cheese plant in 10th of Ramadan City — have had to temporarily shut down. Others managed to stay open, but have had to quickly adopt safety protocols, some more stringent than others.

In addition to the La Vache Qui Rit plant, operated by by Bel Egypt, other closures include a Nestle plant in 6th of October City, two Lecico ceramics factories in Alexandria's Borg al-Arab, a Samsung plant in Beni Suef, a food manufacturing plant at Quwaysna's industrial zone in Monufiya and a ready-to-wear clothing factory in the village of Hayatem in Mahalla.

In late April, the labor minister announced that his ministry had inspected more than 4,400 facilities between March 30 and April 28 and said it had reviewed protective measures to shield employees from the spread of coronavirus at the workplace.

Mada Masr spoke with workers from three separate factories in 10th of Ramadan City, Obour and Port Said to understand what steps each had taken to deal with the pandemic. The approaches vary widely across the different workplaces, from a bare minimum of protective measures to detailed plans of procedure.

"At first, they were cautious about taking any decisions related to suspending work at the factory. There was a general view that there was no need to take any extraordinary measures," says Shams,* a chemist at a food processing company in 10th of Ramadan City.

But that changed when the prime minister announced a nationwide curfew would be put in place on March 25. At that point, according to Shams, management felt the situation had become serious and decided to shut down for a week to assess the situation.

Mahmoud* tells a similar story about the metallurgical company he works for in Obour City, which also shut down for 10 days after the curfew was announced. "Everyone was afraid, workers and business owners," Mahmoud says. "Also, the market had come to a halt since mid-March so there was no longer a need to keep working."

The initial anxiety and worry prompted by the announcement of the curfew and closure of public spaces dissipated within a week.

The initial anxiety and uncertainty soon subsided. A week into the curfew, many factory schedules were reorganized to accommodate the new hours and people were back at work. The food processing company, which employs about 1,200 workers, started using an alternating system with a team working for a 24-hour shift, including a four-hour break. They would then take off for 48 hours while two other shifts were on rotation.

The metallurgical company, which employs about 100 workers, also put in place an alternating shift system, with one team working eight-hour shifts while a second team works 16-hour shifts to avoid moving after curfew. The teams switch the shift hours each week. The food processing company eventually returned to its regular system of three shifts per day after factory buses were exempt from curfew while the metallurgical company continued with its alternating shift system.

Shams says the food processing company took a number of protective steps for its workers. "The factory is disinfected daily and (has) enough alcohol and masks to last a month at least," he says. "At first, we'd give factory workers two masks per day — one to wear throughout the shift and until they get home, and another to wear on their way to the factory in the morning. Yet as masks became more difficult to come by, we started distributing just one mask for a temporary period until supplies became available."

The factory requires workers to wear their masks as soon as they set foot on the company bus and encourages them to continue wearing the masks until they get home. Later, management started to give out transparent face shields and alcohol containers. Workers also have their temperatures taken before they enter the factory. Some have been sent home with a high temperature and management has followed up on their health by phone.Regarding physical distance between workers within the factory, Shams says that the packaging department is most at risk because workers there are seated close together, facing each other in rows. The workspace was eventually modified to include plastic dividers between workers.

Shams works in the quality control department, a position that keeps him informed about infection control measures within the factory. He says that management encourages workers to report any symptoms without worrying about the consequences. They assure workers they will get paid sick leave, including in cases of COVID-19 infection, for however long is necessary. 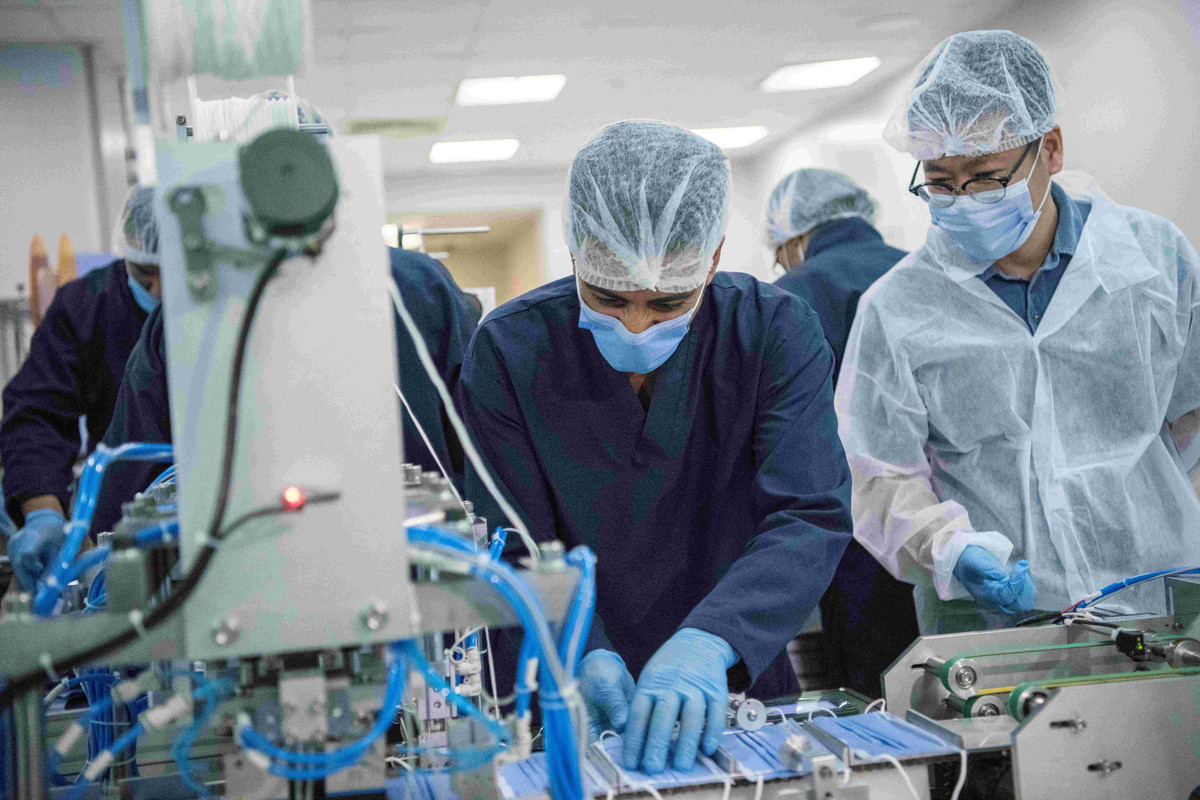 Inside a joint Egypt-China plant in the free industrial zone of Cairo, producing up to 750,000 medical face masks per day. — Photo: Wu Huiwo/Xinhua/ZUMA.

The food processing plant operates around 40 bus routes to transport its 1,200 workers from various locations in Cairo and Sharqiya. Shams explains that a single bus route can pass by more than seven villages in Sharqiya, each of which is home to workers employed in different areas. If any one of them contracted the coronavirus it could lead to the spread of COVID-19 across a wide geographical area. When a case emerged in a Sharqiya village where two of the company's workers live, management decided to give them two days off until it confirmed they lived far away from the infected patient.

There are close to 3,000 factories in 10th of Ramadan City, where half a million workers are employed. About 60 out of Sharqiya's 278 coronavirus patients work in factories.

The company is also taking these measures to protect its reputation and brand as a food processor. "News of a positive case inside Bel Egypt was a wake-up call for us because of the damage we sustained as a result," Shams says. "Our company's management met afterwards to stress the importance of strengthening protective measures."

By contrast, the metallurgical company in Obour where Mahmoud works implemented less rigid protective measures. The initial anxiety and worry prompted by the announcement of the curfew and closure of public spaces dissipated within a week.

"People became less fearful," Mahmoud says. "The leniency with which the curfew was implemented and the limited number of reported cases at the time bolstered the idea that it's not all that dangerous, that it doesn't warrant all this fear."

Mahmoud says that the company does not supply its employees with masks and does not take the workers' temperatures as they enter the factory.

Management does encourage workers to report any symptoms and has assured employees that they will receive sick pay. At the beginning of the outbreak, the company also gave older workers the option of coming to work or staying at home while continuing to receive a portion of their salaries. Older workers ended up returning after a short break.

Mahmoud says the nature of the work in the factory does require workers to be in close proximity to one another, particularly after the company reorganized work schedules into alternating shifts. Each work detail is now composed of no more than 35 workers and the company regularly disinfects the workspace every two days. It is also looking into buying a sterilization booth to spray workers with disinfectant before they enter the factory.

"Management is not interested in pressing workers unless there's an inspection."

Meanwhile, a petrochemical company in Port Said that employs 1,500 workers has left the decision to take precautionary measures up to the workers. Ismail,* a worker at the plant, says the workspace is disinfected around every two days and the company supplies masks and alcohol to workers.

"In the beginning, there was a focus on the need to follow instructions, but things relaxed with time and it became the individual responsibility of workers," Ismail says.

The company posted guidelines around the factory on how to use personal protective equipment, which it supplies, and how to practice social distancing as well as information on how the virus spreads. Yet it does not monitor whether workers are implementing these measures.

"Management is not interested in pressing workers unless there's an inspection," Ismail says. "Other than that, it supplies protective equipment to those who want it and care about protecting themselves."

*Names of sources have been changed to protect their identities.

Women in Egypt have definitively broken the silence around sexual violence — but what comes n...