In Algeria, Ramadan Comes With COVID And Water Shortages

With water rationing, soaring food prices and an economic crisis brought on by COVID-19, Algerians begin the month of fasting in difficult conditions.

ALGIERS — "We have a president who talks to us about oil, meat and Semolina," says Hafid. Speaking from his farm in eastern Algeria, the comments refer to an interview given by Algerian President Abdelmadjid Tebboune, a week before the start of Ramadan on April 13. The Head of State assured that food products would be available, but also warned against speculators, accused in recent weeks of forcing the price of certain basic products — including oil — to soar.

The words apparently have not reassured ordinary Algerians, as the holy month of prayer, fasting and family gatherings begins. "It is not at the time of Ramadan that I will restrict myself," says Hafid, citing the additional expenses for the various dishes — dates, fermented milk, dried fruit, cheese — that will garnish the family table to break the daily fast. "Fortunately I have my sheep, so I will not have to buy imported meat."

After oil, it is the rising meat prices that has upset consumers, and led to calls for a national boycott. In an attempt to reduce prices, the authorities proceeded in early April to issue exceptional authorizations for the import of frozen red meat from Spain. And to fight against speculative practices, the government intends to deploy 20,000 control agents throughout the country of 43 million.

The rise in consumer prices, normal at the time of Ramadan, is extreme this year.

The rise in consumer prices, normal at the time of Ramadan, is extreme this year in large part because of the impact of COVID-19 on businesses, production and manufacturing networks, says Hadj Tahar Boulenouar, president of the National Association of Merchants and Artisans. But there is also the devaluation of the national currency, the dinar, which pushes up the prices of foreign imports. This trend is directly reflected in consumer prices, as "more than 70%" of household needs "depend on imports," the economist Smaïl Lalmas told the daily El Watan.

Since the beginning of the health crisis, nearly 500,000 jobs have been lost, according to initial estimates made in December by the Algerian authorities. In the construction sector alone, the country has lost 150,000 jobs, while a reported 70% of companies are operating at less than 50% of their capacity.

This month of Ramadan could also suffer from another crisis: that of water, with rationing required despite denials by the government. On April 5 in Bordj El Kiffan, located in the eastern suburbs of Algiers, dozens of residents blocked the national road that crosses the town as well as the tramway lines to express their frustration. 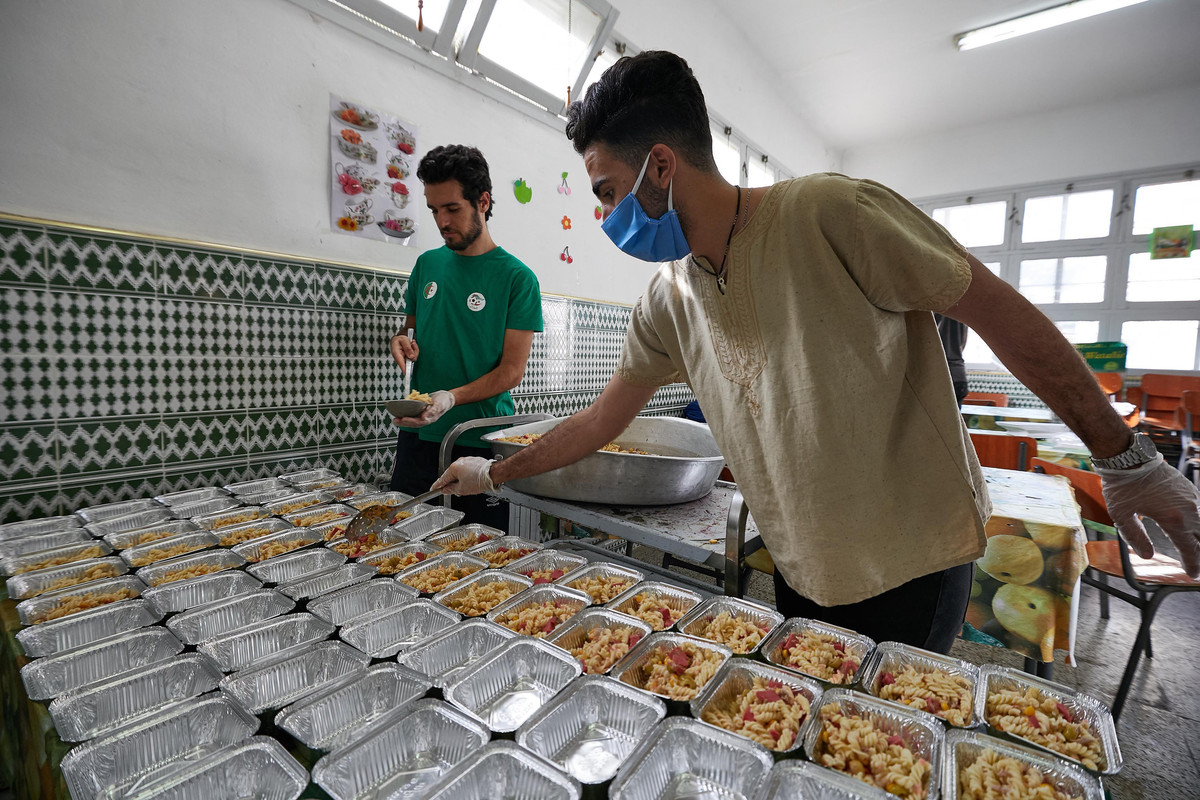 Distribution of food during Ramadan in Algiers in May 2020 — Photo: Ammi Louiza/Abaca via ZUMA Press

"The water is cut off from the beginning of the evening until the next morning, but sometimes the cuts are not made at fixed times" says Latifa, a resident of downtown Algiers.

On March 22, the director general of the Algerian Water Company, Hocine Zaïr, warned that the country will move towards a distribution system of "every other day" if the water reserves are not replenished. Algeria has faced a growing decline in rainfall and a filling rate of dams to 44%, said the official.

Minister of Water Resources Mustapha Kamel Mihoubi has ensured "maintaining the supply to the population in a continuous manner during the month of Ramadan." But in the capital, inhabitants are not very confident and some have already taken measures into their own hands, installing additional water tanks on balconies or roofs of buildings.

As for small towns that are not connected to running water, locals have been relying on community solidarity for many years. On his farm, Hafid had an underground tank dug that can hold hundreds of liters.

"Whenever I need to fill it or irrigate my trees, I call my neighbor and cousin who has a well," he says. "I ended up installing pipes that connect directly to his tank, and I pay him by the hour to compensate for the electricity consumption of the water pump." Yes, family bonds are important all year round.

While drilling deep for water last week in his field near Ouled Rahmoune, in northeastern ...

A "pause sanitaire" is the phrase El Watan, the French-language Algerian daily, used. Such ...