Coronavirus — Global Brief: Why We Never Talked About The Hong Kong Flu

The 1968 pandemic was the first spread by mass air travel on its way to a toll of 1 million dead. Yet somehow it has been largely ignored by history, even if its lessons raise many questions for the COVID-19 world.

SPOTLIGHT: WHY DON'T WE EVER TALK ABOUT THE HONG KONG FLU

The most cited historical comparison for COVID-19 dates back just over a century ago: the Spanish flu. The 1918 pandemic, which killed up to 50 million people worldwide, is mostly viewed today to as a testament to our improved ability to fight the spread of disease and limit loss of life. Yet there is a more recent, and strangely overlooked, example that may be much more worthy of our reflection, with points of comparison that say much about where we are today.

The Hong Kong flu emerged on the Asian island nation in July 1968, and within two weeks had already infected some 500,000 people. Fueled by what was then a recent boom in air traffic, the virus spread swiftly throughout Southeast Asia, and on to the United States through soldiers returning from Vietnam. By the spring of 1970 it had extended worldwide, and killed one million people.

Unlike both the current coronavirus spread and the Spanish flu, the Hong Kong flu didn't seem to attract the attention it deserved. Just a few examples we dug up: In Sweden, this front page of daily newspaper Epressen read "Stockholmers Have To Learn To Walk," referring to infrequent tram traffic due to hospitalized conductors; in France, reporters from weekly Paris Match weren't sent to visit the city's overcrowded hospitals, but a movie set where actress Marina Vlady was found laying in bed — "she doesn't have the Hong Kong flu," quipped the magazine, " she's just shooting a movie;" The Minnesota Star-Tribune recently noted that the only reference to the Hong Kong flu in the local press was an Associated Press report on Dec. 27, 1968: "Deaths attributed to the Hong Kong flu more than doubled across the nation in the third week of December. ... Official figures for the week showed roughly 500 more ‘pneumonia-influenced' deaths recorded in 122 cities." The story ran on page 24.

The global response to today's crisis couldn't stand in starker contrast, and the questions abound: How can we understand the nature of an elusive new virus? What must be done to mitigate its spread and lethality? What will it mean for the future? Indeed, the other great point of contrast with the Hong Kong flu, where no major quarantines were implemented, are the decisions being taken today in countries around the world to do everything possible to limit loss of life, including bringing the entire economy to a halt. That naturally leads to the very complicated question: How do we measure saving every human life against the longer term effects of a possible once-in-a-generation economic meltdown?

For now, it seems most of the world has agreed to prioritize the former at all cost. But as lockdowns are extended around the world and resources dwindle, we should expect that question to grow louder.

FRANCE'S HYDROXYCHLOROQUINE GURU: The name on everybody's masked lips for the past month in France is getting renewed international attention: Professor Didier Raoult received a special guest yesterday at his medical offices in Marseille, as French President Emmanuel Macron visited the controversial microbiologist advocating the use of hydroxychloroquine, a well-known anti-malaria drug, to treat COVID-19.

No press was allowed to attend the surprise presidential visit, and no comment was made afterwards, but Macron's move was quickly criticized as "fueling the hype" surrounding Raoult. It has also prompted comparisons with U.S. President Donald Trump, who has touted hydroxychloroquine as a "game-changer" cure, despite very mixed opinions in the medical community. So who exactly is the colorful infectious disease specialist, and why should we care about him making the rounds? Here are 5 things to know about Raoult:

WHY INDIA'S QUARANTINE IS DIFFERENT: The conventional wisdom right now is to reinforce, and extend, the lockdowns in place in dozens of countries around the world, in response to COVID-19. Yet Satya Mohanty, the former Secretary of India's Ministry of Human Resource Development, notes that not all nations are the same when weighing risks and benefits of halting the spread of the virus compared to the human impact of a hard economic shutdown.

"Whatever is good for richer countries, may not be good for us," Mohanty writes for the New Delhi-based The Wire. "They have 70% to 80% workforce in the organized sector with social benefits and can continue with a lockdown for a longer period of time. The same luxury is not available to India."

The so-called "informal economy" comes with no safety net, in a country where some 70 million people live in extreme poverty. A shutdown of economic activity comes with risks for just about everyone. But not all risks are the same either — for some it is a matter of life and death. 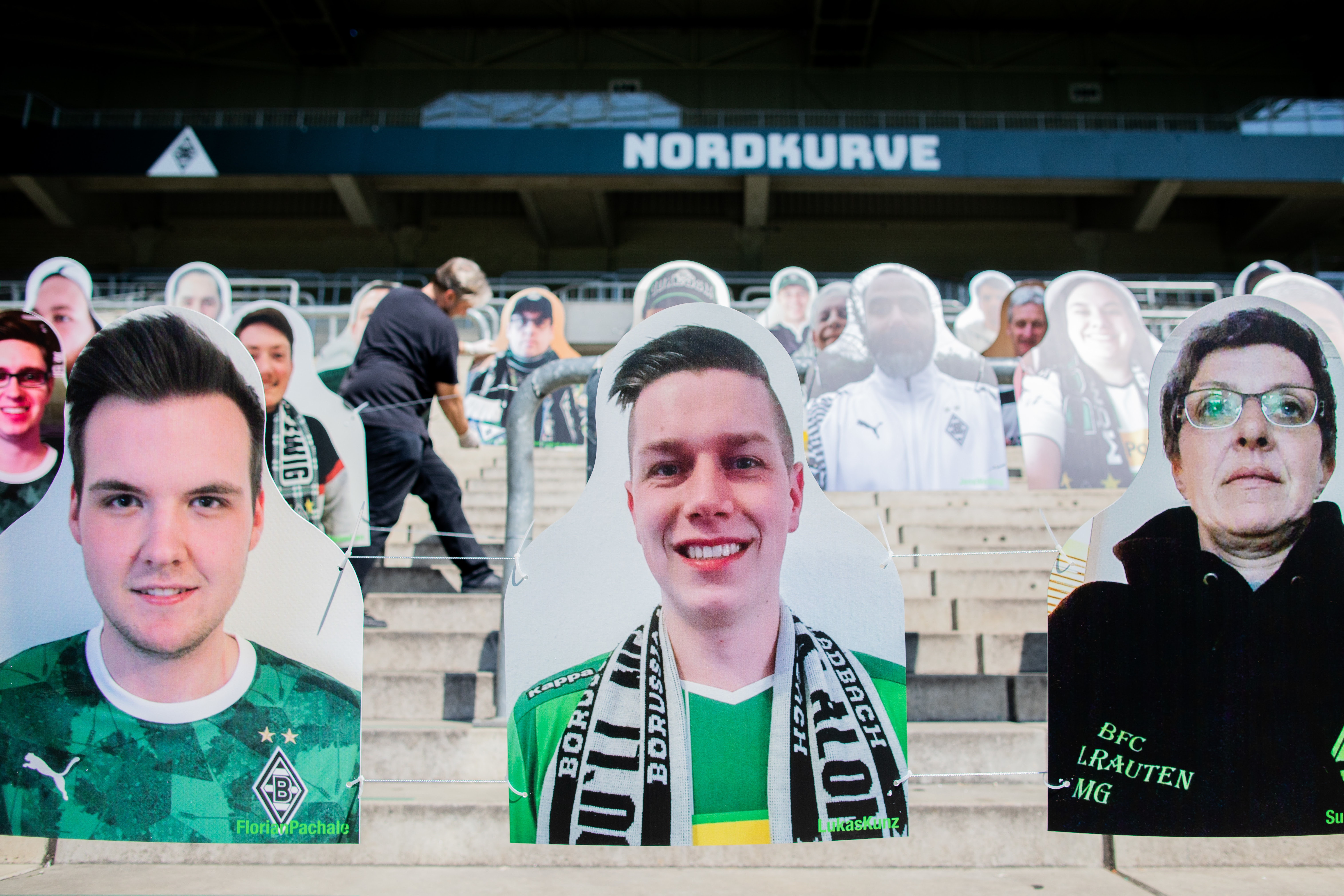 "Cardboard cut-out fans" installed in Borussia Mönchengladbach Park, Germany, in preparation for future games that may be held behind closed doors — Photo: Rolf Vennenbernd/DPA via ZUMA

During a major crisis like this one, people behave towards their leaders like teenagers with their parents.

— French political essayist Dominique Moisi writes about the tensions between and within nation-states, as the world grapples with this unprecedented health pandemic. Read the Les Echos article, translated from French by Worldcrunch: Coronavirus: What Unites And Divides Us

TRANSGENDER LOCKED OUT: For the national lockdown in Peru, which began on March 16, President Martin Vizcarra announced that public movement would be restricted by gender. Women are allowed out on Tuesdays, Thursdays and Saturdays and men on Mondays, Wednesdays and Fridays. All inside on Sunday. Such an approach was also adopted by Panama, supposedly meant to make monitoring easier for security forces.

But LGBTQ+ associations say the transgender community is left in a legal identity limbo and particularly vulnerable, reports Lima-based daily La República. Police abuse towards transgenders had already been a recurring problem in Peru, and the activists say the gender-based quarantine rules are increasing discrimination and harassment.