For the coming weeks, Worldcrunch will be delivering daily updates on the coronavirus global pandemic. Our network of multilingual journalists are busy finding out what's being reported locally ā€” everywhere ā€” to deliver as clear a picture as possible of what it means for all of us at home, around the world. To receive the daily brief in your inbox, sign up here.

SPOTLIGHT: HEALTH VS. THE ECONOMY

Two months into the crisis, social distancing and strict lockdowns have emerged as the only weapons in the war against COVID-19. Governments are now looking hopefully to countries like China and South Korea where a mix of tough isolation measures and mass testing have curbed the spread. Still amid extended shutdowns to daily activity, and multibillion-dollar bailouts to provide immediate relief, national leaders know they're edging closer to a lasting economic meltdown that could pose an equally real threat to people's wellbeing.

And so far, the middle-road has mostly been abandoned. Britain and the Netherlands were the latest European countries to drop the herd-immunity approach and impose lockdowns. Among the last holdouts is Sweden, where elementary schools, offices and even restaurants remain open. While some suggest that Sweden's low-regulation, high-trust model might be the way to save both lives and the economy, Swedish epidemiologists are worried, saying we know too little about the virus to experiment as Europe's coronavirus outlier. But public health authorities said in a press conference, as emergency care patients reached 180 on Thursday, that there were no ongoing discussions about lockdowns, and that "Sweden has better preconditions than Italy, and we've had the time to build up our emergency capacity."

Meanwhile, while leaders in the rest of the world scramble for a viable exit strategy, we should expect more open-ended lockdown extensions. But some experts suggest that even the strictest social-distancing measures will only bring temporary respite, as shown in Hong Kong, Taiwan and Singapore, where we see reports of a sudden uptick in new cases. If cases are bound to surge again once public life picks up, it would leave the only option of continuing lockdowns until a vaccine is developed. By that time, however, the only uncertainty on the economic front would be whether the recession becomes a depression. 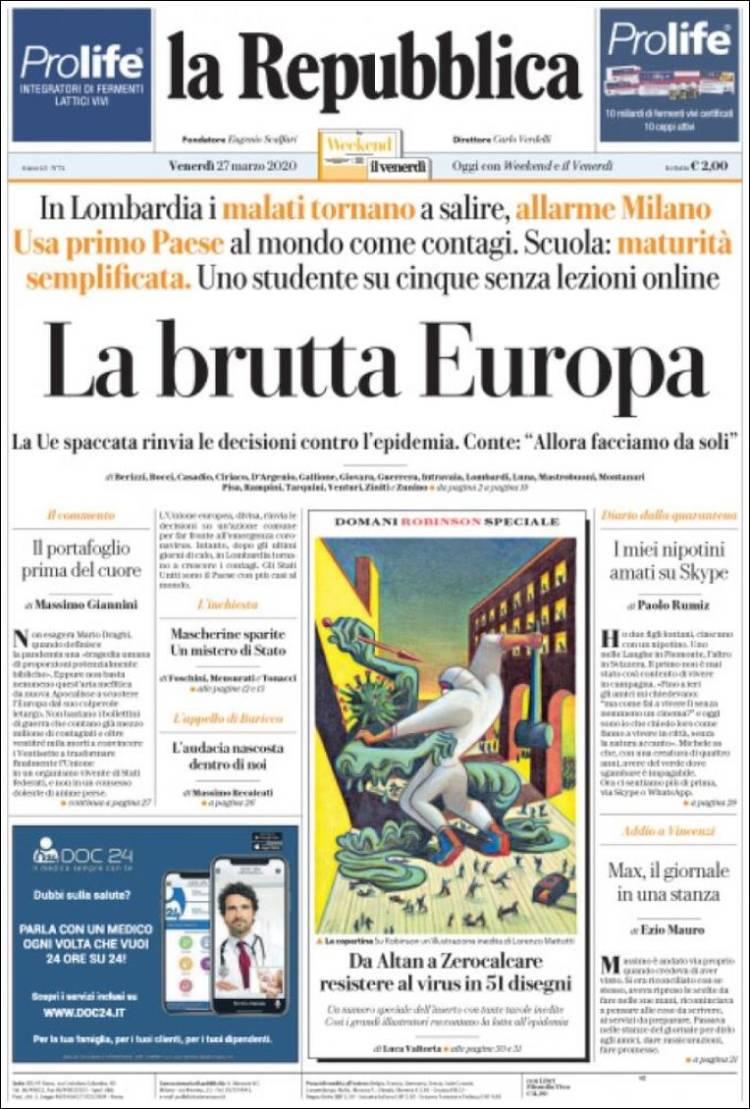 WHAT THE AWFUL NUMBERS IN ITALY TELL THE REST OF US: Earlier this week, there was a glimmer of hope. After overtaking China for the country with the most coronavirus deaths overall, the number of daily fatalities in Italy decreased for several days in a row. But then on Thursday, they shot back up: 712 in the previous 24 hours, followed by Friday's all-time high of 969. There are of course many crucial questions about resources available, as well as the choices that public officials and medical teams are taking, but other countries now being hit by the outbreak are also looking to Italy to try to see if where their own respective crises might be going:

SOCIAL DISTANCING & CULTURE I: In the Ivory Coast, where most aspects of life are carried out in public spaces and sharing is the norm, many now have to choose between the norms of a subsistence livelihood or the government's orders when it comes to protecting oneself against the spread of coronavirus, reports Le Monde. Francis Akindès, a sociologist and professor at the University of Bouaké, notes that "in Africa, distancing yourself from others is a luxury." In the country of 25 million, 46% of the population lives below the poverty line and many are living day-to-day, without the choice of whether or not to continue work. Financially and culturally, isolating oneself or withdrawing from society is not only considered unacceptable, it is virtually impossible.

SOCIAL DISTANCING & CULTURE II: While social distancing seems to have been easily adopted in certain parts of India, like Mumbai and Maharashtra, where management has taken to drawing circles on the ground for customers to stand in to curb the spread of coronavirus, it is also shining light on another kind of social distancing that Indians have been plagued with for over two millennia, as reported by the Delhi-based news site The Wire. India's caste system, which holds deep religious, cultural and historical significance in their society, was formed based on the Brahmanic idea of different castes, or hierarchical groups, detaching or distancing themselves from the rest of the population. Dr. B.R. Ambedkar, author of the essay Castes in India, writes that caste has the "virtue of self-duplication…inherent in it." Thus the Indian government's orders for a nationwide quarantine this week to stem the spread of coronavirus, calling for the physical separation among people, doesn't sound so unfamiliar.

BRAZILIAN GANGS IMPOSE CURFEWS: With President Jair Bolsonaro downplaying the threat of COVID-19, leave it to Brazil's gang leaders to become the unexpected voice of reason in the fight to contain the spread. Brazilian daily O Globo reports that in several of Rio de Janeiro's lowest-income favelas, drug traffickers and gang members have been imposing strict curfews. Gang members in the coastal city took it upon themselves to address the 40,000 residents with loudspeakers about the new 8:30 p.m. curfew they would be imposing. As they say: Whatever means necessary.

• Confinement a struggle? At least you can still open the window, says this French submariner.

• No tourists! London gives Abbey Road crossing (of Beatles album eponymous fame) a new paint job, which you can check out on the iconic street's live webcam here.

For the coming weeks, Worldcrunch is delivering a concise, once-a-day global update on the coronavirus pandemic from the best international news sources, regardless of language or geography. To receive the daily brief in your inbox, sign up here.

In China, The Post-COVID Boom Has Begun

How is the Chinese economy doing these days? Start by asking Louis Vuitton, whose flagship Beijin...