My Mentor Is A Millennial: On The Benefits Of Reverse Mentoring

It's called "reverse mentoring," where veteran executives get some raw feedback from younger workers. Can it help Latin American business loosen up and build for the future?

SANTIAGO — In Chile, Banco Santander has come up with a mortgage plan for millennials. You have more than 40 years to pay it off. It makes sense when millennials and now also their successor Generation Z are an important part of the workforce and their banking customers. Not surprisingly, it was the fruit of a meeting in 2019 between bank directors and young Santander professionals that explored social networks and other tech-related issues. It was an example of what's been dubbed "reverse mentoring" to show executives what the market expects.

When millennials state their hopes and needs to seasoned business hands, it can help executives take another look at a generation reputed to have contradictary ambitions and an aversion to commitment, and perhaps use them to revitalize their businesses. While mentors are usually expected to be experts in their fields, here it is the experts opening themselves to advice.

Reverse mentoring began some five years ago in Microsoft's offices in Austria, then Norway. There, the managing-director Michael Jacob and a 28-year-old sales executive began regularly exchanging ideas respectively in leadership and overall vision, and technology. The idea may also have come in part from the legendary General Electric boss Jack Welch who credited a young employee for teaching him what the Internet could do for his firm.

The boss is thought to have all the answers.

Isaías Sharon, executive director of the Chilean-based Smart Coach International Academy, says the practice of turning to young people for advice is slow to start in Latin America. Those firms eyeing reverse mentoring tend to also have a focus on their digital transformation and seeking a less top-down, "more innovative" management style.

Oscar Freigedo, head of the Savvy HR Consulting, cites examples in Argentina. "You see these initiatives in firms with technological roots," he says, though traditional economy firms like Dow or Unilever were also working on methodologies relating to "corporate culture, leadership, strategic vision, respect or diversity." Firms, he said, were moving toward "liquid modernity" where hierarchies disappear and roles become flexible following the mindset of future leaders.

The Chilean investment bank BTG Pactual began showing interest in reverse mentoring, after it was noted that younger employees were better at building horizontal, "two-way" relations at work. Other firms are waiting for a cultural change in a conservative country before using such mentoring among staff. 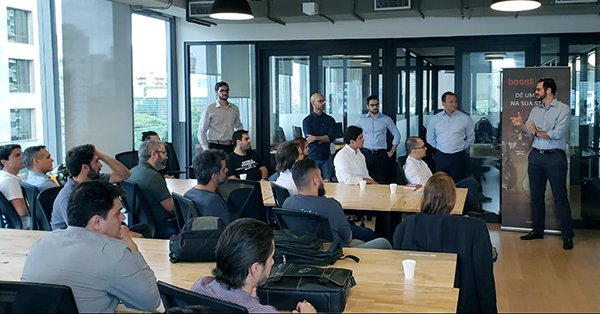 Luz Eugenia Mundaca, head of the Leadership and Coaching course at the Adolfo Ibáñez University in Chile, says senior executives have big egos and are used to giving orders. "You still have many vertical firms where the person in charge is very important. They are formal and the boss is thought to have all the answers." Reverse mentoring is "difficult to implement in those surroundings," she says, adding that older executives see the young as having short-term perspectives and not tolerating setbacks, which prompts them to ask what they could learn from them.

There must be affinity on both sides.

Mundaca believes firms must first change their views of "leadership and power, and increasingly become horizontal in their relations," to embrace reverse mentoring. A firm that decides to use it would typically pick among its most promising youngsters to mentor. Mundaca, who advises firms on reverse mentoring, says they are usually university graduates with digital know-how and good social and communication skills. There must be affinity on both sides, a willingness to learn on the executive's part and a shared view of objectives sought.

Ultimately, says Mundaca, both sides benefit from reverse mentoring. "The youngster benefits because they are introduced to the business and the industry, while the older executive feeds on the technological experience."