Vanessa, one of the hungry hippo at Pablo Escobar's estate - Sinikka Tarvainen/DPA/ZUMA

Once part of the cocaine kingpin's private zoo, the animals are now an invasive species impacting the local environment. But few in Colombia have the heart to kill them off.

BOGOTÁ — The story's been told before, and dates back decades. And yet, its relevance continues to grow — in a very literal sense — and presents Colombia with a real conundrum.

We're talking about the handful of hippopotamuses that the notorious cocaine trafficker Pablo Escobar imported in the 1980s, for his private zoo. The drug lord was killed in 1993. But the huge herbivores lived on and made their way off the Escobar estate and into the nearby Magdalena river, where they have joyfully multiplied ever since.

People initially talked of 14, then of 40 hippos, though the review Biological Conservation now estimates that there are between 93 and 102 hippos roaming in an area of some 2,000 square kilometers. The review warns that at present reproductive rates, the number could reach 1,500 by 2039.

This is another of Escobar's troubled legacies for Colombia: an invasive species, and a particularly outsized one at that, with no natural predator in Colombia. The African animals, by all accounts, feel quite at home on the banks of the Magdalena. But they are threatening the livelihoods of local communities and directly, and very successfully, competing for food with two particular local species: the capybara and manatee.

A co-author of the recent study on the hippos, Rafael Moreno, explains that hippopotamus feces, furthermore, generate microorganisms that consume oxygen and effectively suffocate the surrounding ecosystem.

Killing them is a "technical" decision.

The problem, then, is what to do about the huge animals. They're an invasive species, yes. But they're also living, sentient creatures.

Not surprisingly, the issue has fueled debate on networking sites, especially in response to the Biological Conservation study, which suggests hunting — in addition to castration and transfers — to curb their numbers.

"For the population to die out, we need to take out 30 animals a month (15 males and 15 females)," Moreno explains. "The objective is to extract them from the environment because they are harming it."

Discussions on the ethics and politics of killing these animals reveal our differing perspectives on nature, and have effectively become a debate between defenders of animals and defenders of the environment, with nuances.

The biologist Juan Ricardo Gómez, a doctor in Rural and Environmental Studies from the Pontifical Xavierian University in Bogotá and specialist in invasive species, is clear on the need to cull. It may seem harsh, but killing them is a "technical" decision, especially since "nobody is prepared to pay for their removal elsewhere," he says. "You have to think of the effect the hippopotamuses have on other species and animals." 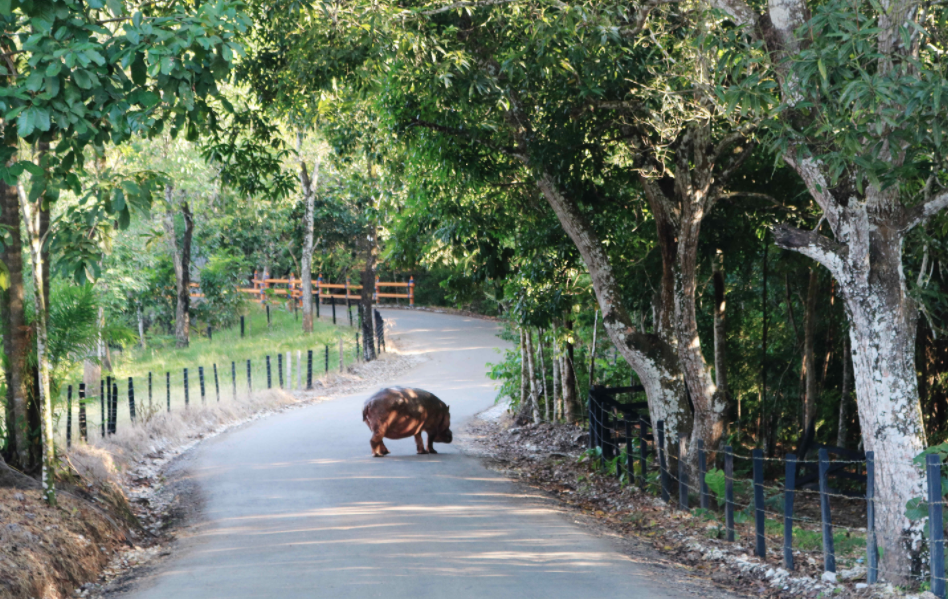 But the veterinarian Isa Naudín, a member of the Animal Balance organization, wants more time. Her organization is embarking on a hormonal sterilization program in coordination with Cornare, a local environmental authority, that could be an alternative to culling. It's unclear how much the program will cost, or how long it might take to show results.

It was clearly an act of arrogance on Escobar's part.

Bringing over hippos from Africa was clearly an act of arrogance on Escobar's part. But in doing so, he also left us cause to reflect more deeply on our overall relations with nature, and on our tendency as a species to feel superior to and dominate nature, as evidenced by the worldwide environmental crisis we have collectively created.

The biologist Germán Andrade, a member of UICN, a conservation society, sees a clash of two visions of nature in the debate. One is defending the "ecosystemic ethics," which place biodiversity and ecosystems above particular creatures. "This dimension comes from the land ethic of Aldo Leopold, who believed something is good if it's good for the community in a wider sense, and not just for human beings," Andrade says, noting that this vision aligns most closely with the arguments of environmentalists.

On the other side, he adds, is the Peter Singer line of thinking, which holds that "ethics are manifest in human considerations intended to avoid the suffering of sentient animals." In other words, why kill the hippos and make them victims of a human decision?

Andrade believes the decision requires concessions to balance the emotions and scientific aspects of the dilemma. Debates between those giving humans or other life forms the central role should instead become a debate centered in the ecological system of which humans are a part. "The ecocentric ethic values the integrity of ecosystems, biodiversity and human rights over the lives of individual animals," he explains.

Catalina Reyes, a biologist at Los Andes university, suggests a similar solution. She agrees that the welfare and rights of the hippos must be considered, but says that the priority must be to safeguard Colombia's biodiversity. With that in mind, she proposes two steps: First, exhaust the sterilization option over a three to five-year period; then, if that doesn't work, cull the animals, but with enough sedation to avoid pain and suffering.

We tend to feel affinity with animals we see as being "closer" to ourselves.

In 2015, the Environment Ministry then led by Gabriel Vallejo won the Cannes Lions competition for its campaign encouraging people to fish and eat the lionfish, another invasive species threatening local marine life. In that case, though, no one complained about killing this fish to moderate its effects on the ecosystem.

Is that fair? Why does the hippo have more defenders, and why has it become a dilemma for environmental authorities?

In 2012, the debate around hippos became so politicized that a Medellín judge banned from hunting them on grounds that the animals are "charismatic." As Reyes points out, fish were not given "the same value as animals like the hippopotamus," being considered more "basic."

Moreno agrees, and says we tend to feel affinity with animals we see as being "closer" to ourselves. "That's why a little dog seems prettier than a snake. This shows how difficult it is to manage an invasive species that is charismatic," he says.

Education plays a role too. In school Colombians learn more about African animals than they do about native species. Juan Ricardo Gómez from the Pontifical University says if Colombians were educated early on about native "manatees of the Magdalena river, otters and capybara, the decision would already be taken, because we'd have more empathy and be clear on which ones to protect."

The ethical debate is both important and necessary, but shows no signs of being resolved any time soon. In the meantime, the descendants of Escobar's hungry hippos will continue to reproduce and spread out under the Colombian sun.