Egypt: Costs And Benefits Of Working In The Informal Economy

CAIRO — Some people prefer working in the shadows.

The government's incentive to integrate the informal economy is clear. With an estimated value of 2 trillion Egyptian pounds ($121 billion), unregistered businesses are a potential source of substantial tax revenues for the state. The government is also eyeing the money collected by state bureaucrats through the extortion of unregistered businesses, a widespread practice in the informal economy that operates through kickbacks.

Proponents also argue that registering businesses in the formal system allows for a more competitive marketplace, as informal businesses are able to undercut their registered competitors by foregoing taxes and pensions. The disparity can be a serious source of consternation, exemplified in the comment of Mohamed al-Sewedy — a businessman, member of parliament and head of the Federation of Industries — who proclaimed during a parliamentary session that "the real terrorism in the country is the informal sector."

According to the Minister of Planning, Hala el-Saeed, the solution is simple: provide incentives to micro enterprises and small enterprises — which traditionally represent the majority of the informal sector — by streamlining bureaucratic procedures and issuing tax incentives.

Yet this strategy to incentivize informal businesses to officially register has already been on the books for the last 20 years, when Egypt first began attempting to implement a system to fast track the registration process — and the informal economy has nevertheless continued to grow.

The state approaches the issue as a strictly binary one — a formal versus an informal economy — leading to an overly simplified view of Egypt's economic landscape. By treating the informal economy as an aberration — a deviation from the norm that can be corrected — the reform measures the government has pursued over the years have produced meager results.

In contrast to countries where authorities chase after informal enterprises to collect taxes from them, the Egyptian government has taken on a less interventionist approach by introducing economic incentives aimed at attracting businesses to register and join the formal sector.

In an interview in November, Saeed said that the tactic of simplifying bureaucratic requirements and reducing registration costs to encourage informal businesses to join the formal economy is one that has been used in countries around the world.

The primary factor that discourages informal businesses from registering is the costs and interest payments that come with joining the formal sector, says Alia al-Mahdy, an economics professor at the University of Cairo who has researched the issue.

The informal economy represents from 27% to 35% of Egypt's GDP, according to common estimates, yet government officials believe it may actually constitute up to 60% of the economy. Mahdy says estimating the size of the informal economy is complex, which leads to the wide disparity in estimates. She calculates that there are approximately eight to nine million informal workers and employees currently working in Egypt. 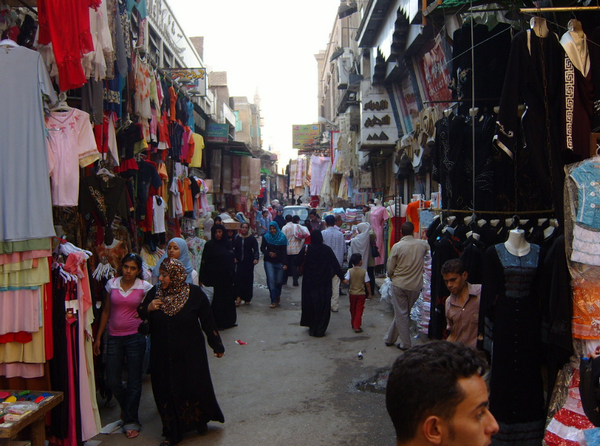 Al-Mahdy, along with other researchers, met with a number of tradesmen who own unregistered workshops between 2003 and 2004. The proprietors said they wanted to legalize their businesses, because they were frequently extorted and forced to pay bribes to various officials.

But the process of legalization is a complex one that involves wading through a maze of red tape, with bureaucratic requirements spread out among a number of state entities, including the Labor Bureau, the Tax Authority, local authorities, and others.

There is also the cost of legalization. Al-Mahdy says that at the end of the day, informal business owners are "rational and crunch the numbers: If a bribe is 3,000 pounds and legalizing costs 10,000, the answer is clear."

In addition to the costs of registering, there are also recurring annual costs to consider. "Applying for commercial electricity alone costs more than 11,000 pounds, and the cost of a business feasibility plan is around 25,000 pounds. Those two requirements alone cost 35,000," Alia says. "It is natural that the business owner would opt to work from home and steal the electricity."

Curbing taxes for micro and small enterprises is a necessary step.

Legalization costs are relatively higher for smaller enterprises, says Ragui Assaad, a professor at the Humphrey School of Public Affairs at the University of Minnesota. "There is a close relationship between the size of the enterprise and the likelihood it remains informal," Assad says.

According to 2010 estimates, the vast majority — around 80% — of all micro and small businesses are informal.

Mahdy and Assaad agree that curbing taxes for micro and small enterprises is a necessary step, but the simplification of the legalization process may be even more important. For example, simplifying taxes so business owners can accurately calculate how much they need to pay on an annual basis is key, Mahdy says. This is particularly true because the nature of the work of many of these businesses is often irregular, so being able to assess the annual tax expense in advance would act as a reassurance.

Most countries have introduced a lump-sum tax, which is a fixed amount payable regardless of the circumstances, Mahdy says. Egypt has succeeded in easing the registration process, as noted in the World Bank's "Ease of Doing Business" report for 2018. Yet Assaad says more needs to be done, including reducing the cost of registration even further.

These types of measures are touted by international financial institutions, such as the World Bank and the International Monetary Fund. However, this type of approach has come under criticism for being detached from the realities of the informal economy. It is more complex than a simple calculation of profit and loss.