If Nordic people are the happiest people in the world, it is thanks to the state of welfare and cuddling with friends in the candlelight. Today the word for this ritual invades the life of Francophones.

GENEVA — How is Denmark, a country with scarce sunlight and high taxes, one of the happiest countries in the world? That's at least according to a happiness index ranked by the United Nations.

Welfare doesn't explain everything. Other Scandinavian countries share a similar economic model. If Danes are happier than their neighbors, it's because of hygge.

The word, borrowed from the Norwegian language, is frequently used in Danish. Hygge (pronounced "hoo-guh") means a type of happiness derived from a friendly atmosphere, candlelight, a tight-knit group of friends, fatty or sweet foods or both. It also involves the rejection of narcissism and online social networks. The concept of hygge has now been exported to the Anglophone world. This year, 25 books on the topic have been or will be published.

Hygge is "an atmosphere," writes Wiking in The Little Book of Hygge: The Danish Way of Live Well. It is "the feeling that one is safe, sheltered from the world, and can let his or her guard down." Other languages have similar concepts: German Gemütlichkeit, English "cosiness". What is fundamentally Danish though is "how we focus on it, seeing it as a trait that defines our identity." Hygge is a strategy to survive Denmark's cold winters. The term also resonates with Danes because of the country's history.

The Danish empire crumbled in the 19th century and lost all its possessions to Germany, Iceland, Sweden, and Norway. "The Danes began to identify with simplicity," says Louisa Thomsen Brits, author of the book Hygge. The military defeat "was not deplored as a loss, but celebrated as a gain."

How would one describe hygge? Wiking offers an anecdote.

"One day, a little before Christmas, I spent the weekend in an old cabin with some friends," recounts Wiking. "We were tired after a walk, a little sleepy, sitting around the fireplace in thick sweaters and wool socks. The only sounds were those of the pot-au-feu (French boiled dish) simmering, logs cracking and someone sipping a hot glass of wine. All of a sudden, someone broke the silence to ask, 'Could someone imagine a moment more hygge than this?' After another silence, someone answered, 'Yes, if there was a blizzard outside.' Everyone nodded."

Wiking conducted an experiment that made subjects spend a weekend without connecting to social networks online. The result? "All the indicators of happiness were significantly increased." So happiness isn't really found on Instagram. 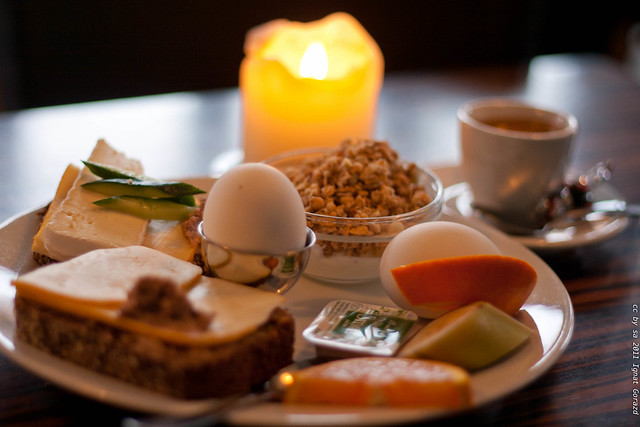 "Our obsession with lighting comes from the lack of natural light between October and March," says Wiking. Danes such as Arne Jacobsen and Verner Panton have created some of the most beloved lamps on the planet. Pioneer Poul Henningson, born in 1894, took the soft lighting of the kerosene lamps of his childhood and adapted it to the electric age.

But candles emit "more micro-particles than cigarettes, the kitchen, or the exhaust gas," says Wiking. Although Denmark has many regulations, there are no health warnings on candles. Hygge involves taking "a break from the requirements of healthy living," he says.

It's not just candles. According to the annual Europe report on sugar confectionery, a Dane consumes 8.2 kilograms of sugar a year, double the world average.

The most essential ingredient of happiness is a connection to other people. "In all of my research, it is the thing that I am the most certain of," says Wiking. According to a majority of Danes, it's necessary to have three or four friends to be hygge. Work hours in Denmark allow for plenty of time with friends.

"Stay at work past 5:30 p.m. and the office will be as deserted as a morgue. Work on the weekend, and the Danes will think of you as crazy," says Wiking.

Hygge also involves certain behavior traits. "To boast of achievements and show off a Rolex is considered bad taste, breaking the hygge. The more bling, the less hygge."

Not everything is great in Hygge country. "The Danes are not very good at inviting new people into their circle of friends," Wiking says.

There are other factors too. The World Health Organization says that Denmark is 82 in a ranking of suicide worldwide. Why are suicides so high in a happy country?

"It is more difficult to be unhappy in a society that is otherwise happy," says Wiking. "Because the evaluation of one's own happiness feeds on a comparison with others."

Greta's Right, Our World Leaders Still Don't Get It

From climate change and migration, to tobacco deaths and exploitative business practices, governm...

Free Your Mindstorms: How Lego Stays On Cutting Edge Of Coding Education

PARIS — Block construction, robotics and basic coding — all in one package, and ...