The Temptation Of Radical Islam In Kosovo

A mosque in the eastern Kosovo city of Gjilan. The vast majority of Muslim worshipers in Kosovo have no extremist links. - Jonathan Landay/TNS/ZUMA

The Muslim majority Balkan nation, liberated from Serbia with the help of Western forces in 1999, is no longer immune to the worldwide nexus of radical Islamic forces.

PRISTINA — A.B.'s horizon has shrunk. For months, the universe of this Albanian Kosovar who used to dream of adventures and holy war in Syria has been limited to his modest family home located in an old Yugoslav army building in a drab little village near the Macedonian border.

Placed under house arrest ahead of his trial later this year, the 28-year-old feels downhearted. His mood is as black as the flag of the jihadists he joined around Aleppo, Syria, two winters ago.

"I thought I was doing something pure and just," he says. "I've been branded with a red-hot iron: terrorist, even though I'm not one. I won't get a girlfriend anytime soon. There are no wives for terrorists."

A.B.'s romantic troubles are nothing compared to the time he will likely spend behind bars. In the summer of 2014, local police launched a vast operation against Islamist networks here in Kosovo, a small country that gained independence from Serbia in 2008 thanks to NATO warplanes and the EU's political support. A source close to the case says that police were "in all likelihood alerted by American intelligence services, worried about the Kosovar authorities' passiveness." It's a brand new country with 95% Albanians, who for the most part claim a tolerant "Muslim tradition" inherited from the Ottoman empire.

Kaçanik, Kosovo, and its surroundings have been of particular interest to the police. This town of 30,000 residents, located on the road to Macedonia, has built itself a dirty reputation since ISIS follower Lavdrim Muhaxheri, one of its children, exposed his cruelty on social networks. In a video published in May, he's seen using a rocket launcher to pulverize a young man attached to a tree in Syria.

About 20 people from the area are said to have gone to Syria to fight with the jihadists. "It's a very poor region, with poor education, and it's close to Macedonia where imams can preach radicalism, call for holy war and get away with it," says Skender Petreshi, researcher at the Kosovar Centre for Security Studies (KCSS). "We cannot exclude Russia's ambiguous game through Serbia that could be using these radical groups to destabilize Kosovo," he adds.

Serbia never really accepted losing Kosovo, the "cradle" of its orthodox Church. As for Russia, beyond the orthodox fraternity, it has always considered the Balkans a strategic region, a corridor between Europe and the East.

During the 1998-1999 war led by Kosovo Albanians to gain independence from Serbia, Serbian propaganda described the Kosovo Liberation Army (UCK) as a dangerous pack of Islamists. "It was never a religious war" — meaning between Muslim Albanian Kosovars and Orthodox Christian Serbs — says Kadri Veseli, head of the Kosovar National Assembly and former chief of the Intelligence Service of the UCK. 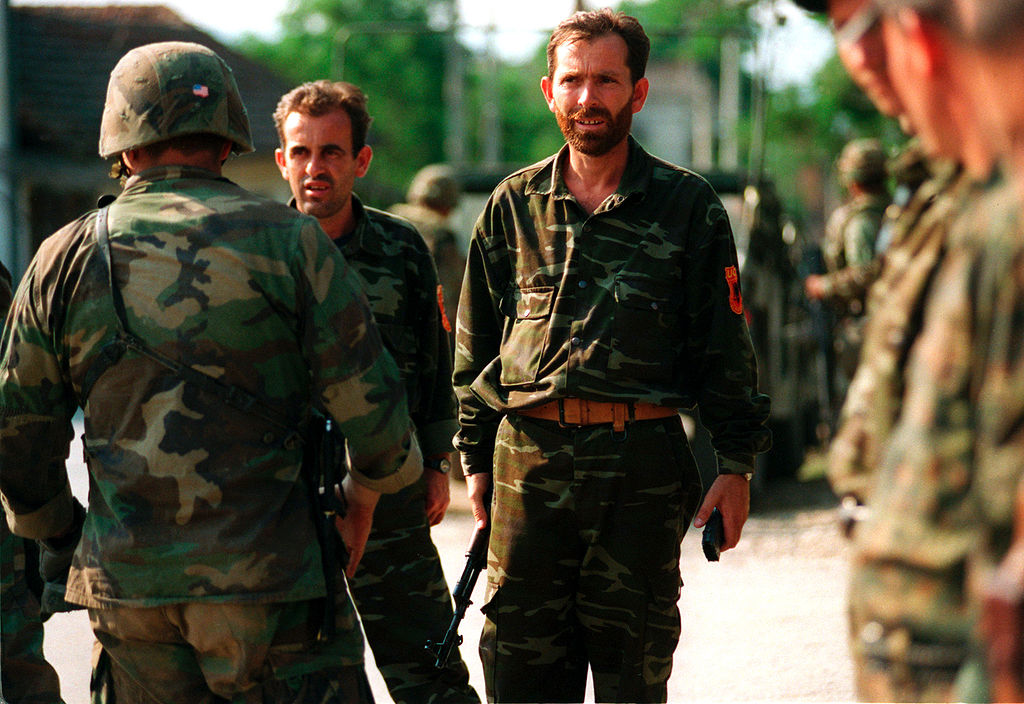 UCK troops turn over their weapons after the end of the war. — File photo: U.S. Marines

Many former leaders of UCK, which has been in power since the end of the conflict, have actually been trained at the atheist school of Communist Albanian dictator Enver Hoxha (1908-1985).

In the early hours of Aug. 11, 2014, A.B. was arrested at his workplace, seven months after returning from Syria. Forty other people like him who had made that journey were also arrested. The most dangerous ones are still in prison. A.B. is under house arrest, where he thinks about his "mistake" and his boredom living with his depressive father. "My only outings are my appointments to the dentist, under police escort," he says.

A.B. could be sentenced to between five and 10 years for participating in terrorist activity. "He will in all likelihood be found guilty, but judges could show discretion because he admitted that he'd gone to Syria," says his court-appointed lawyer, who wishes to remain anonymous. "And I've never seen anything in his case that proved that he fought with either ISIS or al-Nusra. I wouldn't have defended him if I hadn't been forced to," she admits. The black flag of ISIS and the atrocities broadcast on the Internet aren't popular in Kosovo.

Youtube is where it's believed to have started for A.B. "I was outraged by the images of Syrian children killed by Bashar's army," he says. "I was thinking of the Kosovo war. I started on social networks and I organized my departure alone," he claims. The trainee jihadist speaks only Albanian. But his brother, a former UCK fighter, traveled to Syria before him. "He was probably taken care of by the Albanian groups who were already there, among them Lavdrim Muhaxheri," says researcher Skender Petreshi.

A.B. remains evasive when he talks about his time in Syria. "There are 300 Kosovars in Syria, some of whom have gone with their families," says Kadri Veseli. That's in addition to some 60 others who have been killed.

Hetem Dema, another former UCK fighter, is among those dead. Unlike A.B., whose religious commitment isn't striking, this forty-something was radicalized before he left in 2014. "I'm happy for him, he's probably in heaven," says his wife, wrapped in the niqab she's been wearing for the past two years, which is something of an oddity in Kosovo.

But these minor drifts worry Kadri Veseli and others. "Especially when you observe a religious comeback in Albanian society, against a backdrop of poverty and identity crisis," says Linda Gucia, sociology professor at the University of Pristina. "What future do the youth of a country that remains outside Europe have, except for religion or emigration?" 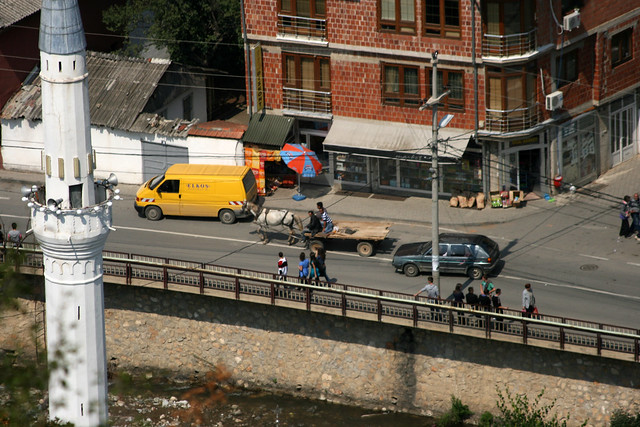 On Nov. 27, two weeks after the Paris terror attacks, Kadri Veseli went to Pristina's madrasa. The message he gave to the 500 students of Islam gathered there was twofold. He reaffirmed the separation of state and religion in Kosovo, and reminded them that "those who committed the attacks are enemies of God and faith, criminal groups that seek to destroy our mindset of religious tolerance and solidarity."

Says a former diplomat, "Nobody doubts that Kosovar authorities are sincere in their fight against religious radicalism. On the other hand, some criticize the slowness of their reactions against certain disturbing phenomena." By that, he means "the activity of a number of NGOs from Saudi Arabia, among others, that are engaging in proselytism under humanitarian aid cover."

This goes back to the aftermath of the Kosovo war. "These organizations took advantage of the post-war void, of the lack of a state, to circulate their extreme and rigid religious vision," admits Xhabir Hamiti, professor at the Faculty of Islamic Studies of Pristina. Mosques have been built with Gulf money, worshippers have been paid to go there, and imams have been trained in Egypt and Saudi Arabia, among others. All of this happened outside of the Islamic Community of Kosovo, the representative organization for Islam, which was taking its marks amid the collapse of Yugoslavia and the rise of Albanian nationalism.

"That doesn't make them terrorists," says Kadri Veseli. "But religious fundamentalism bears the seeds of terrorism." A dozen imams who "were spreading hatred and were calling to join the holy war in Syria," Xhabit Hamiti says, were thus arrested in the summer of 2014. Among them was the imam of Pristina's Great Mosque. "The seeds of radicalism were planted more than 10 years ago," concludes sociologist Linda Gucia. "They've had time to grow since then, and it'll be hard to get rid of them."

New waves of migrants, including Syrian war refugees, seek to reach the gates of Europe at the Hungarian border.

A New Clandestine Crossing Into The EU, Via Serbia

At the border between Serbia and Hungary, the number of illegal arrivals has increased dramatically over the past few months. Syrians and Afghans who take the road in the Balkans cross paths with migrating Kosovars.