Sweden And Denmark, A Scandinavian Showdown Over Refugees

Tensions rise between northern European neighbors. Sweden is second only to Germany for hosting the most refugees, while Denmark is dubbed Hungary of Scandinavia.

MALMÖ — In the hall of the Malmö station, in southern Sweden, two men sit side by side with relief visible in their eyes. They finally made it. Ali, 20, and his uncle, Mohamad, left the Syrian city of Aleppo a month ago.

"There's no electricity, nothing to eat or to drink anymore," Mohamad says of Aleppo.

Unlike many of their travel companions, they have no family in Sweden. But they were told they would be well received here. "It's a good country to raise a child," Mohamad says. His family stayed in Syria. "Crossing the Mediterranean is too dangerous," he explains. In Hungary, the police arrested him and placed him in a detention center for a week, before he escaped. His nephew continued to travel alone.

When he arrived in Malmö 15 days ago, Ali thought his uncle would never be able to join him. That's because Denmark has reinforced police checks at its entrance since the arrival of several thousand refugees this month. It's the last stop for those who dream of the Swedish El Dorado. Copenhagen also decided to suspend any railway traffic with Germany. As a result, refugees now use the ferry that connects Germany and Sweden directly.

At the Malmö station, volunteers continue to receive those who have slipped through the net from Denmark. They set up a stand on a square and serve sandwiches and drinks. Passersby stop to offer help. Some come bearing bags full of warm clothes, shoes and toys.

Others leave money to pay the train fare for those who want to travel on to Stockholm, Oslo or Finland. The SJ rail company announced it wasn't requiring tickets to bear specific names, as a way to facilitate moving around. A small Red Cross van has been on site for the past few days. "We mostly tend do to foot injuries or sunburns," supervisor Lena Yoanes notes. "Some children have fever."

There are immigration services here. "The quicker the asylum requests are registered, the better it is for later," a civil servant explains. Police officers are stationed around but don't intervene. Many of the volunteers are from Denmark. Some even bring people refugees across the bridge that passes over the Øresund strait, the sound that separates Denmark and Sweden. They risk two years in prison if they are caught. Jibran, Omar and Haroon, three friends of Pakistani origin, don't care. "Our government isn't doing anything for these people, so we decided to do something," Omar says.

A few days ago, they were in Rødby, in southern Denmark, for a ferry's arrival from Germany. "But the refugees didn't dare speak to us," Omar says, "because they were afraid of being arrested."

Images of entire families walking under police escort along the highway to Copenhagen left the Danes shocked. The left-wing daily Politiken reacted by characterizing Denmark as the "Scandinavian Hungary," given the eastern European country's refusal to allow refugees inside its borders. To break the stalemate, Prime Minister Lars Løkke Rasmussen asked his Swedish counterpart to let those who wanted to get to the other side of the bridge to Sweden pass. Feeling that Denmark should take its share of refugees, the Swedish head of state Stefan Löhven refused.

"A force for Europe" 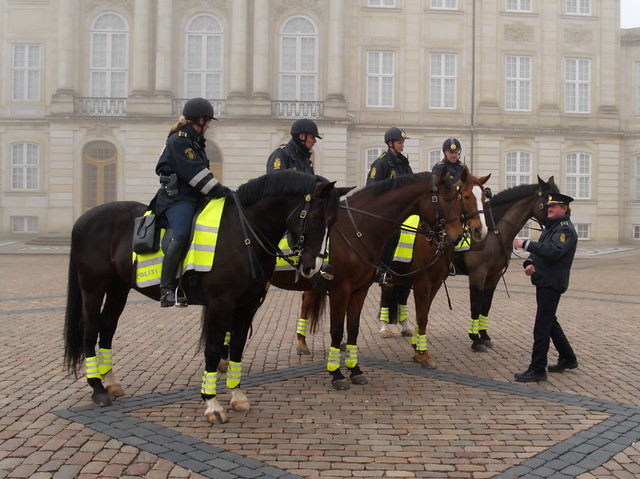 The Immigration Ministry says that social welfare allocated to refugees in Denmark has been reduced by half, that obtaining a permanent residence permit or family reunification there is complicated, and that those whose applications are rejected are deported immediately. Lawmaker Marcus Knuth, a member of Venstre, Denmark's left-wing Liberal Party, explains the measures. "Last year, we received as many refugees as the 15 European countries who receive the least combined. Our system is about to collapse."

The message, he says, is mostly meant for smugglers, who "lead entire families on roads that can turn out to be deadly." In Sweden, the social-democrat Minister of Justice Morgan Johansson responds angrily, saying, "It's not really the time to scare those fleeing their war-torn country, but to show solidarity."

If Sweden is opening its borders, it's mainly for humanitarian reasons, he explains. "It's obvious, especially when so many people flee a war as horrible as the one currently taking place in Syria." But, he says, "let's not forget these migrants represent a force for Europe. A third of the Syrians we receive have university diplomas. There are nurses, doctors, engineers, the kind of jobs for which we lack candidates. Some only see the costs in the short-term. It's true that receiving them has a cost. But it's also an investment."

He mentions, for instance, Västra Götaland County, in westen Sweden, which realized it would need to recruit 200 doctors in the next few years. "Government officers went by the region's reception centers and discovered there were 31 Syrian doctors," Johansson says. "They immediately set up a program to teach them medical Swedish in one year."

The government, made up of the Green and Social Democratic parties, just allocated the equivalent of 3.2 million euros to the Department of Social Affairs, to accelerate the validation of foreign diplomas. It also granted an extension of 160 million euros to municipalities that will now receive 16,000 euros per hosted refugee.

At the Swedish Migration Office, officiails say the situation is under control, even if new arrival records are being set, with more than 3,000 asylum requests filed per week. To handle this, the administration has opened several offices across the country. It also just negotiated 20,000 accommodation places with private bodies: former schools, abandoned hospitals, deserted hotels. In one year, the agency's budget doubled, from 960 million euros in 2013 to almost 2 billion in 2014.

In Malmö, the Immigration Office is now open on weekends and until 9 p.m. during the week. The port, with 370,000 residents, is the main gateway into the kingdom. About 40% of asylum seekers arriving in Sweden pass through here.

In the large waiting rooms in the working-class neighborhood of Jägerso, about 100 people are waiting their turn. There are many men, families too. After the fingerprint process, asylum seekers are called in for a private interview in the presence of an interpreter. They receive a bank card, which allows them to open an account into which benefits are deposited twice a month. They are provided with free accommodation in one of the country's many reception centers. Then they leave with an appointment for a review of their case.

Last year, 77% of asylum requests were granted, "almost 100% for Syrians and Eritreans," a supervisor says. Most refugees received a permanent residence permit and will be able to be naturalized within four years.

"Studies have shown that those who get a provisional residence permit live in insecurity and fear, not daring to leave the country, while those who are naturalized are more likely to return home, as they have the guarantee that they'll be able to return to Sweden if the situation worsens," says Peo Hansen, a political science professor at the University of Linköping and specialist in European immigration policies.

On the square outside the Malmö station, left-wing lawmaker Rossana Dinamarca, who came here from Chile "just 41 years ago," is delighted. After an asylum seeker murdered a woman and her son in an Ikea store during the summer, and as the far right party's support rose in opinion polls, the rhetoric became tougher. "But politicians have to notice that people are supporting receiving the refugees," she says.

Both the political left and right invoke moral duty. Hansen talks about "a wound in the national consciousness after World War II, mixed with a certain sense of pride." That's because Sweden helped Nazi Germany very actively. "Growing up, we learned it was a huge disgrace," she says. "But Sweden also helped save Danish Jews evacuated in 1943, and it received survivors of concentration camps and Baltic and Finnish refugees after the war."

The influence of the Social Democratic party, in power for 68 years from 1932 to 2006 (with an interruption between 1976 and 1982) also counted a lot, observes Jens Orback, head of Stockholm's Olof Palme International Center. "The notion of solidarity was very important." He mentions the former prime minister, assassinated in 1986, who was a defender of Central American liberation movements and a fierce opponent of the Vietnam War.

"We have a strong welfare state," Orback says. "We've never opposed groups against one another. It's also because Swedish nationalism isn't as strong as elsewhere. We're not scared of seeing our culture disappear little by little."

"This has a lot to do with the image we have of ourselves as a moral superpower," says political specialist Andreas Johansson Heinö. "It's a question of prestige. We could almost describe this as chauvinism." The paradox, he says, "is that for a long time we were a very homogeneous society, with a language, religion, people. The nation has never really been threatened. This is why we have the means to open our borders."

"The constant fear of being invaded"

In Denmark, it's the complete opposite. Danish writer Carsten Jensen, who is very critical of his country's policies, explains that the relationship with Germany is crucial. "For centuries, our neighbor was a large, aggressive military power that kept threatening to swallow us up," he says. "We constantly lived with the fear of being invaded. After World War II, when this threat disappeared, it left a void in the general Danish consciousness. Immigrants filled it, and we still live with the constant fear of being invaded."

But, in Sweden, some towns do protest against the influx of refugees. The government has just announced it would impose quotas to balance the accommodation of refugees across the country. But the justice minister remains optimistic. The far right may be gaining ground after every election, but ""opinion polls also show a rise in tolerance." Last month, thousands gathered in Malmö to welcome the newcomers.

"Amazon is ‘un-Swedish'..." Yes, in my country too, you'd probably hear something called osvenskt in one of those low-budget conference halls where "patriots" gather to drink domestic beer and ...

It's now been four months since most of the world reached the agreement that Sweden's no-quarantine strategy had failed. In the end, it was the only European country to never go into lockdown, and ...