Pope Francis And Barack Obama, Why The White House Believes

On the eve of the pontiff's visit to the United States, confidential Obama administration documents reveal a remarkable harmony with Francis' objectives.

NEW YORK — When preparing for President Barack Obama's first meeting with Pope Francis last March in the Vatican, White House and State Department staff made a prediction. "Pope Francis' diplomatic legacy is still being built, but the â€˜pastoral conversion' which is the hallmark of his pontificate is taking shape in important ways. The pope's grip on the world stage means that his pastoral actions will have widespread political implications," the document reads.

These words are among the sensitive and confidential documents obtained by La Stampa that help to understand the growing alliance between the United States and the Holy See, one that Washington hopes to consolidate when Francis arrives on Sept. 22 for his first visit as pope.

The reports were compiled to provide Obama with an overview on the pope himself and the structure of the Vatican and then elaborate on several areas of common interest and potential collaboration, including the fight against poverty and hunger, climate change, the war in Syria, the Israeli-Palestinian peace process, relations with Cuba and human trafficking.

The document also touches on the fight against poverty and income inequality, noting that since Pope Francis' election in March 2013, he has attracted the world's attention with his unique style of leadership, clear humanity and empathy and devotion to the poor. While strengthening the Church's traditional teaching, he has clarified that attention given to controversial social issues like abortion and gay marriage should not overshadow other pastoral duties, such as looking after the poor, the ill and the needy.

The grounds for further cooperation lie with a pope who has changed his priorities, placing "life issues" at least on the same level of importance as other social issues that also concern the White House. On that note, the report recalls Evangelii gaudium, Pope Francis' apostolic exhortation that calls for the "elimination of the structural causes of poverty," and denounces "a financial system which rules rather than serves." 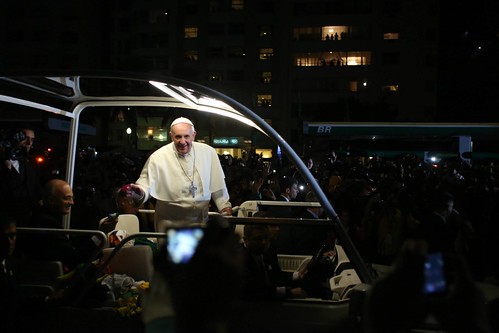 Obama's counselors note that "some observers saw this [exhortation] as a challenge to the excesses of capitalism," but dismiss the accusations of Marxism it has attracted, emphasizing that Francis' views on the economy are "rooted in thousands of years of Catholic doctrine. Human well-being is determined by moral choices, and the Church must always focus on defending the poor." This focus on "human dignity", the report adds, is common Catholic vernacular, but by setting a personal example, Francis touches the issue in "striking" ways.

The White House documents note that the Vatican sees protecting the environment as a "moral duty" and express high hopes for the pope's new encyclical on the environment, which was bitterly criticized by conservatives in the U.S. The Holy See considers issues of political economy and the environment to be strongly linked, and the next apostolic exhortation will draw attention to this connection. The Vatican publicly recognized the serious and potentially irreversible effects of global warming.

On Syria, Obama's staff support an approach of helping people escape extremism. In the Israeli-Palestinian conflict, they advocate "direct negotiations" toward a two-state solution. When Secretary of State John Kerry — himself, a Catholic — conducted months of determined negotiations, Pope Francis spoke in support of the United States' efforts to restart a dialogue on various occasions.

From Havana to Rome

The U.S. document obtained by La Stampa relating to Cuba offers a glimpse of what were then secret negotiations to restore diplomatic relations between Havana and Washington, with the Vatican ultimately playing a key role as mediator. "We respect the Vatican's point of view regarding the economic sanctions the U.S. has imposed on Cuba but we note that despite these sanctions, the U.S. is one of the island's main trade partners. We are Cuba's first or second source of food imports every year."

But Washington remained firm that rather than the embargo, the roots of Cuba's difficulties lie in the politics and actions of its government. On this basis, the Vatican would subsequently host secret talks in Rome that led to the historic reestablishment of diplomatic ties between the two neighbors.

The convergence between Washington and the Vatican is very strong in other issues as well, including initiatives against hunger, the fight against human trafficking — a form of modern slavery that has exploded during the migration phenomenon — and the persecution of religious minorities.

Washington notes how Francis has managed to capture the attention of Catholics and non-Catholics alike around the world. "In situations of conflict, he will continue to be a voice for reconciliation. Concern over the persecution of Christians will push the Church towards pragmatic policies," the document reads. "Where religious freedom is restricted, as it is in China, Francis will seek pastoral opportunities to reach out to faithful, avoiding clashes."

There will be plenty to discuss next week in Washington, and even before Francis and Obama shake hands there is plenty to agree on.