On The Front Line Of The Forgotten War Of Nagorno-Karabakh

In a car near the border with Azerbaijan, 30km from the capital Stepanakert - Roberto Travan

The breakaway country's fight for independence has lasted 25 years in the rubble of the Soviet empire. There is, inevitably perhaps, a growing religious rhetoric to the battle.

STEPANAKERT — Marut is wearing faded camouflage, with a bayonet clamped to his belt and a degree in his pocket. He tells us how his grandfather fought the Germans in 1945, how an uncle of his took on the Taliban in Afghanistan in the 1980s and how his father fought against Azerbaijan in the 1992 war for independence.

Two years ago, Marut joined the fight himself, serving on the frontline against Azerbaijan just like his father once did.

Marut's story is hardly unique in these parts. "Here, everyone has fought to defend our land and our mountains," he explains, holding a Kalashnikov so battered it seems to have taken part in all the wars he just described. Theirs is a fight clearly against the odds, as the international community considers the would-be breakaway republic of Nagorno-Karabakh to be part of Azerbaijan.

Marut and his men — young conscripts barely pushing 20 with gaunt faces, shaved heads and sunburned skin — stay in the shade of the sandbags, hiding both from the snipers and the suffocating heat. They battle various enemies: the insects, the homesickness, the time passing so slowly, any way they can. Some close their eyes and pray in an improvised chapel by the nettings, covered in dust, creased holy pictures and spent tealights. 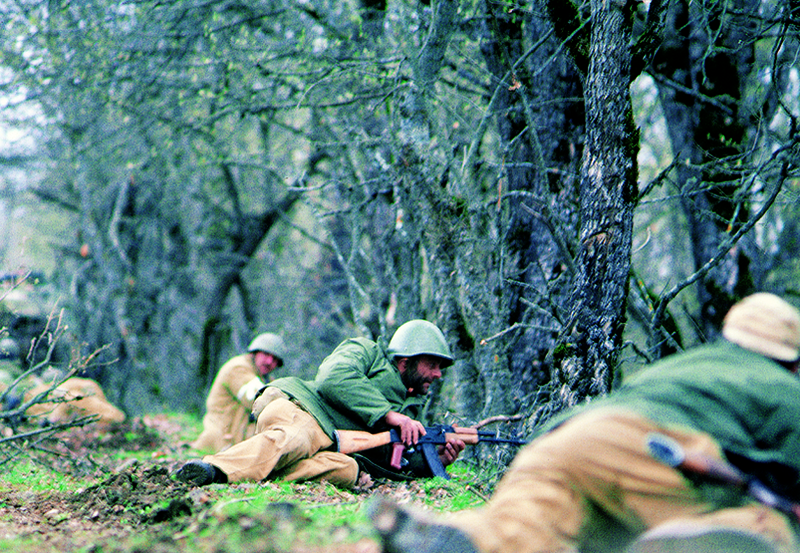 But the main enemy, the Azeri military, is just meters away from the barbed wire, beyond the minefields at the end of the no-man's land. "A couple of weeks ago they killed one of our men," says Marut, pointing to the centimeters-wide opening in the wire through which the fatal shot passed.

The front, several hundreds of kilometers long, follows the entire frontier with Azerbaijan, from Iran up to Armenia. It is furrowed with trenches that are sweltering in the summer, humid quagmires in autumn and frigid, windswept shelters from enemy mortars in the winter. It is a quiet war of attrition, a conflict forgotten for 25 years — and perhaps many more to come. Up here in the mountains, peace seems such a distant prospect it doesn't really get talked about.

Azerbaijan wants its province back while Nagorno-Karabakh wants its freedom, and this fragile standoff (at times no shots are fired for months, then raging combat suddenly resumes) continues to cost millions of dollars in armaments and a toll in human lives, including at least ten killed this summer.

Seventy years before its collapse at the end of the 1980s, the Soviet Union transferred this Christian Armenian-majority province to the the Muslim region of Azerbaijan. In 1991, an independence referendum sparked two years of warfare that left 30,000 people dead, thousands injured, almost a million refugees and countless internally displaced. Dozens of villages were razed, with crumbling bridges, mosques and churches reduced to rubble.

Many on both sides of the conflict say that the war was fought above all along ethnic lines. But others point to the increasingly religious nature of the conflict. "We are the last stronghold to defend Christian Europe from the assault of Islam," says an official, holding a rosary in his hands. "Russia understands this, you [in the West] don't …"

While Russia maintains a military garrison in Armenia, this doesn't stop Moscow from selling weapons to Azerbaijan at dizzying prices. Caught in the middle is this tiny land's obstinate struggle for independence that has so far gone unrecognized by every state in the world — not even by "mother" Armenia.

"We are our mountains," reads a monument at the doors of Stepanakert, the capital of Nagorno-Karabakh. These mountains are rough, beautiful and forgotten, where young men like Marut continue to face down the enemy and die for the sake of an elusive independence.

In Azerbaijan, The "Sextape" Is An Instrument Of Repression

Critics of Ilham Aliev's regime accuse the government of using sexually explicit material — including images of wives and daughters — to strong-arm its opponents.

TALISH — For some, this is a forgotten war. For others, it's a frozen conflict. There are also those who consider it a proxy war between ...