In order to circumvent French and German mediation, the Kremlin is leaking secrets to the press as a defacto policy of stalling in its seven-year-long conflict with Ukraine.

KYIV — Due to their sensitive nature, international negotiations come with certain requirements: first, don't disclose their details; and secondly, what has not been signed and agreed upon is not fit for implementation.

The Russian newspaper Kommersant has published details of what should have been confidential communications among the so-called Normandy Format negotiating countries (Russia, Ukraine, Germany, and France) regarding new approaches to finding a peaceful settlement of the contested region of Donbas.

Since its creation in 2014, the Normandy Format has managed to ink several deals on prisoner exchange, yet has repeatedly failed to end the war in the eastern Ukrainian territory between Kyiv and pro-Russian insurgents. Ceasefire agreements are constantly broken and there are weekly reports about injured or killed Ukrainian soldiers who remain on the borderline of the occupied territories.

While Germany and France are clearly in the role of mediators, and Ukraine as participant, Russia tries to present itself as a mediator, even while clearly representing the rebel military groups. Yet, neither Ukraine nor European countries acknowledge rebels as lawful representatives of Donbas.

At the same time, there is another forum for trying to resolve the Russian-Ukrainian conflict within the Organization for Security and Co-operation in Europe (OSCE), dubbed the Minsk Protocol, after the capital of Belarus where the meetings between Russia, Ukraine, and OSCE were held.

And while all sides continue to study the current written proposals of France and Germany, it looks increasingly as though the Normandy negotiations are frozen, with the center of conversation shifting to Minsk.

Still, for the past several months, there have been Normandy Four talks at the level of advisors to update the Minsk agreements and implement them in blocks. The Germans and French most likely intended to move contentious issues such as border control, elections, withdrawal of troops into a separate discussion, while trying to resolve other points around humanitarian and economic issues.

Kyiv has been trying to reverse some of the agreements that it had to accept at the time of catastrophic losses on the battlefield. According to the Ukrainian side, it was necessary to first solve the problem of the freeing of territories, the withdrawal of foreign troops from Donbas, and control over the common border with Russia; only after that does Kyiv believe they can move on to holding elections and temporarily introducing a special status of the territories. The Minsk agreements, on the other hand, are exactly the other way around. 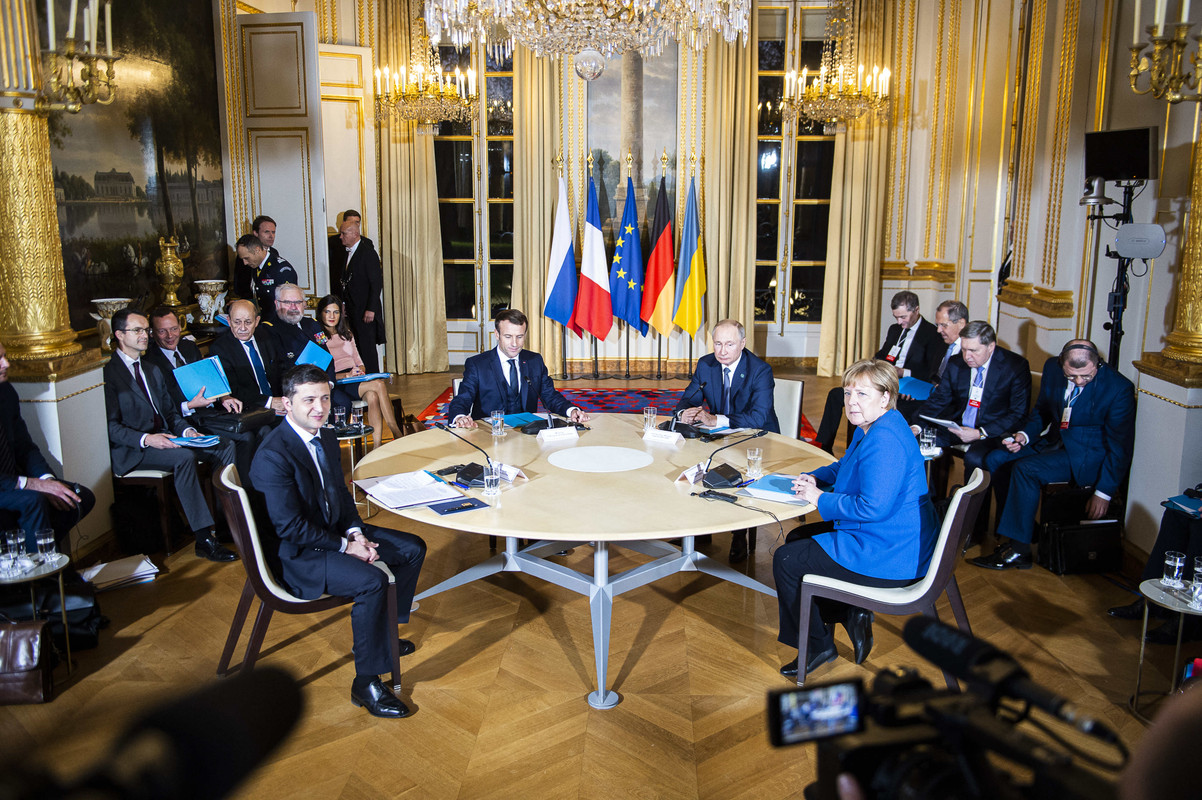 At a meeting of the Normandy Four leaders in Paris in November 2019 — Photo: Eliot Blondet/Abaca via ZUMA Press

Here it is worth recalling that in 2016, after the summit of the leaders of the Normandy Format in Berlin, the parties signed a communiqué. There it was proposed to develop a road map for resolving the situation in Donbas, but Russia froze the process and no map was created.

On March 16, 2021, in an interview with the Russian news agency Interfax, Dmitry Kozak, a Russian negotiator and close ally of President Vladimir Putin, blamed the "very strange confidentiality of the Normandy negotiations" for blocking progress.

"Ukraine is in favor of confidentiality. Germany and France support it in this with references to diplomatic traditions. We are in favor of abandoning this tradition, which is harmful in this case, and for full openness of the negotiations," Kozak said. "If it were possible to change this principle, then you, and through the media and all interested citizens and states, would be able to assess for yourselves whose 'creative ideas,' 'proactive position' or 'strong moves' are the real reason for the lack of any progress in resolving the conflict."

In other words, this major Russian power broker was issuing a public warning to all sides of the Normandy Four that Russia would leak information about the talks. Why? Because Moscow does not need any progress on peace. It prefers to constantly hold Ukraine by the gills. It actually likes neither negotiations at the level of the Normandy Format nor the Minsk agreements. That is why it is very likely that the documents that were leaked to Kommersant were sent directly from the Kremlin.

Now, Moscow is pushing Berlin and Paris to freeze the Normandy Format indefinitely. But Russia's attack is also aimed at Ukraine, where public opinion is not necessarily in favor of negotiations. This all makes a long-awaiting peace deal seem even more impossible than before.

Moscow and Washington are attempting to work out how to communicate with each other after Joe Bid...