JERUSALEM — The pounding of the hammer resonates in Jerusalem. "They are in the process of constructing a synagogue," said the Israeli tour guide in front of the tunnel, which attracts hundreds of tourists even though they have difficulty navigating it.

"One might say that there are plenty of places of worship like this," said the guide, a 40-year-old originally from New York. "But the situation is a little different at these depths." Bewildered visitors walk through the tunnel until an unusual sight makes them pause. Three women are hunched over copies of the Torah, or Jewish law. They pray in silence in the cramped space in front of a stone wall close to the "Holy of the Holies" — the most sacred inner sanctum of the Temple of Herod. According to Jewish tradition, this is where Tables of the Law given to Moses on Mount Sinai was buried.

"For now only a few people can worship here at a time but the situation will soon be improved," promises the Western Wall Heritage Foundation, which hopes to introduce a dignified place of prayer within the next year. 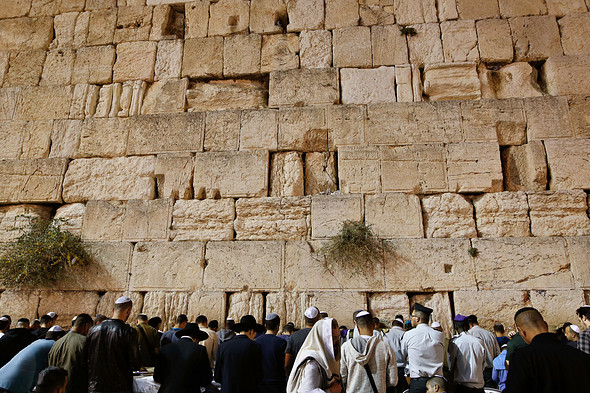 The construction is part of a vast underground work in the vicinity of the Esplanade of the Mosques, known to Jews as Temple Mount, in Jerusalem's Old City. "The authorities are in the process of revamping a parallel city under Palestinian homes," said Nir Hasson, a reporter for the newspaper Haaretz, who recently investigated the project.

"We dig wherever opportunities present themselves with the idea of facilitating public access to the Kotel (the Hebrew name for the Western Wall) and to better understand one of the most glorious periods of Jewish history," said a spokesman for the Western Wall Heritage Foundation.

After many years of excavation and renovation, the foundation recently opened a large vaulted chamber dating to the Mamluk period. Situated near the tunnel that runs along the base of the Western Wall, the chamber welcomes visitors to participate in an "interactive journey" tracing the footsteps of the Jewish communities expelled from Jerusalem in 70 AD.

Observers barely raise an eyebrow when they hear that one of the grandchildren of Israeli gas tycoon Yitzhak Tshuva celebrated his bar mitzvah here. "This incident illustrates the scandalous non-transparency by which the underground expansion of Jerusalem runs," said Yoni Mizrahi, the head of Emek Shaveh, an NGO campaigning against the misuse of archeology for political purposes. "Not only was this underground space annexed by the Western Wall without taking into consideration the opinions of those who live here but it's operating in total disregard of that part of Jerusalem's history that has nothing to do with Jewish presence."

The controversy surrounding the work conducted below the surface of Jerusalem is not new. The first pickaxes dug under the Kotel in the 1970s, just after the Israeli army's conquest of East Jerusalem. The rhythm of the excavation and development, as well as speculation about the real objective of the work, intensified over the course of the last decade.

The promoters of these excavations emphasize their desire to learn from the archeology of the site and to develop tourism. Their critics denounce the political aims of their underground involvement. "It is not known if there is an exact plan for Jerusalem's underground," Hasson said. "But the general aim is clearly to impose a narrative centered on the Jewish history of the city at the expense of other periods. Without a doubt the goal is to exclude the Palestinian identity but also to make it impossible to divide the city in the case of a peace agreement."

The mayor of the city, Nir Barkat, recently said before a delegation of the Likud Party that it's important that users of this underground "understand who exactly this city belongs to."

It was with this goal in mind that the Elad, also known as the Ir David Foundation, began to clean up and open the ancient network of tunnels underneath the predominantly Palestinian neighborhood of Silwan in the mid-2000s. With plenty of money and hard work, the foundation strengthened the Jewish presence in this neighborhood at the foot of the al-Aqsa mosque.

About 500 Israeli settlers reside among about 50,000 Palestinians in Silwan. "The discovery of the tunnels allows us to expose the Jewish history here to the entire world, where archeologists say King David's palace stood 3000 years ago," said Zeev Orenstein, a spokesman for the tourist site in Silwan.

Israel's Antiquities Authority, which supervised the excavations, has identified an original pipe of 533 meters from 8th century BC that brought water from the Gihon Spring to city walls. The guide recounts major events from the Bible without ever mentioning the Palestinian population that lives in Jerusalem.

Since 2013, visitors to the "City of David" have the possibility of seeing the Jewish neighborhood of the Old City without seeing any of the Palestinian homes. Tons of rubble and waste were cleared from a second tunnel that was 700 meters long and was drilled during the period of Herod.

"It is only a step," said Orenstein. Above the narrow tunnel, which was once used for sewage, archeologists have started to clear out the old Roman road near Temple Mount.

"It will be the highway of the underground city," predicts Hasson. "And I would not be surprised if Elad implants itself in the exhibits and businesses." 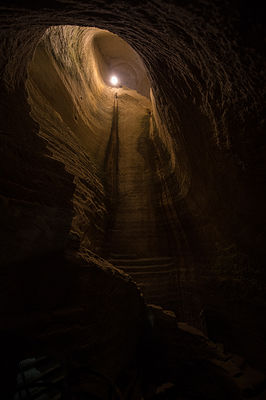 One of the underground caves in Jerusalem — Photo: Li Rui/ZUMA

The park, where only 10,000 to 20,000 visitors came each year a decade ago, now attracts almost a half-a-million visitors. Its popularity will continue to grow if the tunnels of the "City of David" are one day connected to those at the Western Wall.

"The development of these tunnels for tourism serves to impose the idea that the authentic city is the one which remains underground. The settlers that would govern it would be legitimate residents while the Palestinians would live on the surface presenting an obstacle to its regeneration," said Mizrahi. His NGO accuses the archeologists of violating the rules of their profession by excavating in areas explored with a questionable objective since the end of the 19th century.

"It's slander," said Ronny Reich, who led the research team exploring what lies under Silwan for nearly 15 years.

"I am not naïve. Of course I understood that the primary goal of Elad doesn't have much to do with science," he said. "But that was never my way of working."

Reich said that his discoveries speak for him. "We published more than 70 scientific articles on the discovery of the fortified tower that protected the Gihon Spring, the location of the Siloam basin and the dozens of seals attesting to the presence of Judaism on this site," he said.

"We program our excavations by using great restraint because we are perfectly conscious of the immense sensitivity of the area in which we operate," said Yuval Baruch, the archaeologist in charge of Jerusalem at Antiquities Authority.

A bitter lesson was learned one day in September 1996 when Israeli President Benjamin Netanyahu authorized workers of the tunnel along the Western Wall to drill an exit in the middle of Via Dolorosa. The Palestinians, angry that the work reached the basement of the Noble Sanctuary, responded with demonstrations that quickly turned deadly. About 100 people were killed.

"Our visit is over," the Israeli guide said when the small tour group resurfaces and prepares to enter the Palestinian neighborhood. "You are of course free to shop and eat wherever you'd like. But I advise you to follow me to the two armed guards who are waiting for us at the exit. They will accompany us to the starting point of our visit."

The Silicon Wadi, as Israel's tech sector is known, has a penchant for creating innovative new co...