Hiroshima 70 Years Ago, How Newspapers Covered It

PARIS — In the early morning hours of Aug. 6, 1945, the Enola Gay B-29 bomber took off from the island of Tinian, in the Northern Mariana Islands, headed toward Japan. At 8:15 a.m., the first atomic bomb used in history — nicknamed "Little Boy" — was dropped on the center of Hiroshima. The blast, heat, and ensuing radiation killed more than 140,000 people, around half instantaneously.

If today we seem able to grasp the sheer magnitude and horror of the attack, back in 1945 the bombings of of Hiroshima and, three days later, of Nagasaki, were largely portrayed as the latest big battle victory and necessary evil to end World War II.

Seventy years after, the timeline of press coverage offers clues about the evolution of reporting when faced with an inconceivably shocking event destined to become a chapter of human history. Much of the printed and radio coverage in the first few days after the blast took hours and even days to arrive, and was mostly based on official press releases — something increasingly hard to understand in today's 24-hour news churn fed by social media and eyewitness accounts.

And then there are the angles of the coverage. In the U.S. and U.K. for example, there were virtually no voices of dissent to the use of revolutionary bomb to wipe out an entire city, with some papers choosing to focus on the scientific prowess and the technological possibilities the atomic bomb implied — as evidenced by U.S. President Harry S. Truman's first official announcement of the Hiroshima bombing, 16 hours after the blast.

Few American journalists and readers questioned the morality of Truman's decision, nor his government's choice of sharing few details of the operation, thus allowing the cover-up and hiding away of U.S. and Japanese newsreel footage of the blast for years, sometimes decades.

As Hiroshima specialist Uday Mohan pointed out in his 2007 essay Nuclearism and the Legacy of U.S. Media Coverage of Hiroshima, "The first photograph of Japanese victims appeared in Life magazine about two months after the end of the war. [...] For the most part, photographs of the human cost of the atomic bombings seldom appeared in the American media until the 1950s."

Instead, the remote, impersonal yet awe-inspiring pictures of the atomic mushroom cloud started circulating.

Still, even if all the implications could not be understood right away, the dropping of the nuclear bomb was nonetheless huge news around the world. Indeed one British daily headlined after Hiroshima: "The Bomb That Has Changed The World." Here are some notable international front pages from the days that followed, ranging from clinical and dispassionate to tabloid sensational: "The Americans launch their first atomic bomb on Japan," reads the front page of a young Le Monde: The French daily was created less than a year before the bombing. 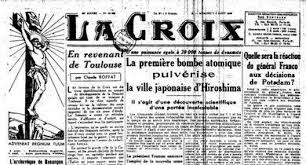 "Not a single living soul left in Hiroshima" — France Soir "The atomic bomb pulverizes every human being in Hiroshima" — Corriere d'Informazione

"Hiroshima goes up into a 15,000 meter-high cloud of smoke and debris" — La Nacion 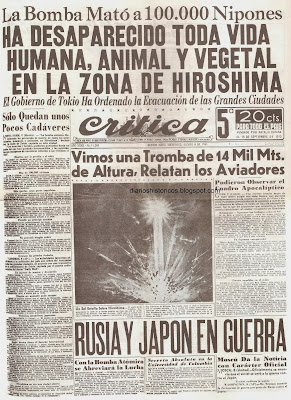 "All human, animal and vegetal life has disappeared from the Hiroshima region" — Critica "Hiroshima, a dreadful field of ruins" reads the front page of the Berliner Zeitung, which was first published on May 21, 1945 in East Berlin.

Though every day a new bit of bad COVID-related (and other) news arrives, the already once-delayed Summer Olympic Games must go on.