The West African country is training and arming everyday citizens to protect remote communities from terrorist groups. But some fear the strategy will lead to even more violence.

KONGOUSSI — Ousséni is proud, and as he looks out at the rust-colored hills in the province of Bam, in north-central Burkina Faso, his face lights up.

The 56-year-old farmer doesn't want to use his real name for this article. But having "finally returned" to his village after months of shock and shame, he says also feels at peace in a way he'd no longer thought possible. And that's because Ousséni feels "victorious" — in the face of the jihadists.

It all began a year ago, the day jihadist fighters arrived in his village and told the inhabitants they had just "72 hours" to leave, or else... When the ultimatum expired, 17 people were executed. Ousséni was able to flee and take refuge with his wife and nine children in Zimtenga, the nearest town, about 20 kilometers away.

Over the course of three days, the same scene was repeated almost everywhere in Bam. As a result, some 20,000 displaced persons flocked to Kongoussi, the area's central town. By the following week, more than twice as many were crowded into makeshift shelters or sleeping on the ground.

"We alerted the police several times, but no one came," says Ousséni, dressed in a purple boubou. Tired of "begging" for food, the peasant decided in the spring to go and defend his land himself. And that's how he became what's known as a VDP, short for "volunteer for the defense of the homeland."

The ravages of terrorism are felt throughout Burkina Faso, with more than 1,600 dead and 1 million displaced in five years. Since the beginning of the year, the government has promoted the recruitment of civilians to be armed and trained by the military. A report by the National Assembly from June estimated their number at "more than 2,000."

After months of absence, Ousséni finally returned to his village, his old hunting rifle on his shoulder. Once there, his heart tightened, fear gripped him. The wasteland, the deserted houses, the silence at the end of the world. "There's no choice," he told himself that day. "If we don't do it, who will?"

He and a handful of neighbors — with just two guns between them — took up guard. In the distance they could hear the sound of motorcycles. "Terrorists," he remembers thinking. He and another guards fired their weapons in the air. The engine noises moved out of earshot. "We fired to scare them," Ousséni says. "They turned around and didn't come back."

In theory, the law stipulates that each VDP must be provided with "specific equipment," consisting of "small arms, either long guns or handguns." And at the end of their training, each group formed is provided with "financial support" of 200,000 CFA francs (approximately 300 euros) per month.

But in the field, the reality seems very different. According to several VDPs that Le Monde interviewed in Kongoussi, some have been equipped with assault rifles, but others have neither equipment nor training.

Ousséni, for his part, says he was trained for 14 days, but that he received neither weapons nor equipment. In his village, where there are now about 20 VDPs, it was necessary to contribute to the purchase of three more rifles. It's a modest arsenal compared to the Kalashnikovs that the jihadists carry.

In a nearby hamlet, four VDPs were killed. On a national scale, the death toll is estimated to have exceeded 120 since February, according to the NGO Armed Conflict Location & Event Data Project, or ACLED.

"Of course we are afraid. We're on the front line, and we have to make do with our own means, but it's a sacrifice for the country," one such volunteer explains. The man, a 45-year-old farmer, says he's seen several "brothers" killed.

The ravages of terrorism are felt throughout Burkina Faso;

Like Ousséni, his only weapon is a traditional rifle, which would otherwise be used to scare off livestock thieves. And yet, he didn't hesitate to become a VDP, volunteering even before the head of state, Roch Marc Christian Kaboré, called last November for a "general mobilization" in the aftermath of an attack on a mining convoy that resulted in 38 deaths.

A month earlier, several hundred demonstrators had already gathered in Kongoussi to create the Movement for Popular Resistance in response to massacres of civilians. "Our villages were disintegrating," says the coordinator of this initiative, lawyer Aly Nana. "We had to turn the tables on fear. That day, we promised ourselves that we would rather die than run away."

After making this oath, groups went back home "armed with knives or guns." Nana says the movement, which works with the VDPs, has coordinated posts in all 45 provinces of this country of more than 20 million inhabitants. But the actions of these defense auxiliaries are unclear. They themselves keep up this mystery. Fearing reprisals, most a reluctant to answers questions.

"We were told not to talk to journalists," some say. "Here, you don't know who is who. We can't reveal our strategy to the enemy," says another.

In Kongoussi, a sort of islet in an area the French authorities classify as a "red zone," distrust is the order of the day. The threat is everywhere: a persistent glance, a passer-by on the phone, a somewhat cumbersome luggage. In February 2019, two civilians died in an attack on the local police brigade.

Mobile and discreet, the VDPs patrol, conduct intelligence and even make arrests, gradually establishing themselves as the auxiliaries of an overwhelmed army. "As soon as a suspect is reported to us, we come as reinforcements and notify the authorities," of the volunteer guards explains. "We have arrested many terrorists."

Col. Karim Ouili, the communications and public relations director for the army, says that the volunteers have the advantage of being local and thus familiar with the areas they patrol. "They know the terrain and can have a permanent presence in certain remote areas," he says. "There are more than 9,000 villages in Burkina Faso; military forces cannot be everywhere."

But while some see these self-defense groups as a necessary protection against terrorists, others worry that they're gaining too much power. In the courtyard of a medical center in Kongoussi, survivors accuse VDP of abuses against the Fula community, which has become increasingly stigmatized since members joined the jihadist ranks. 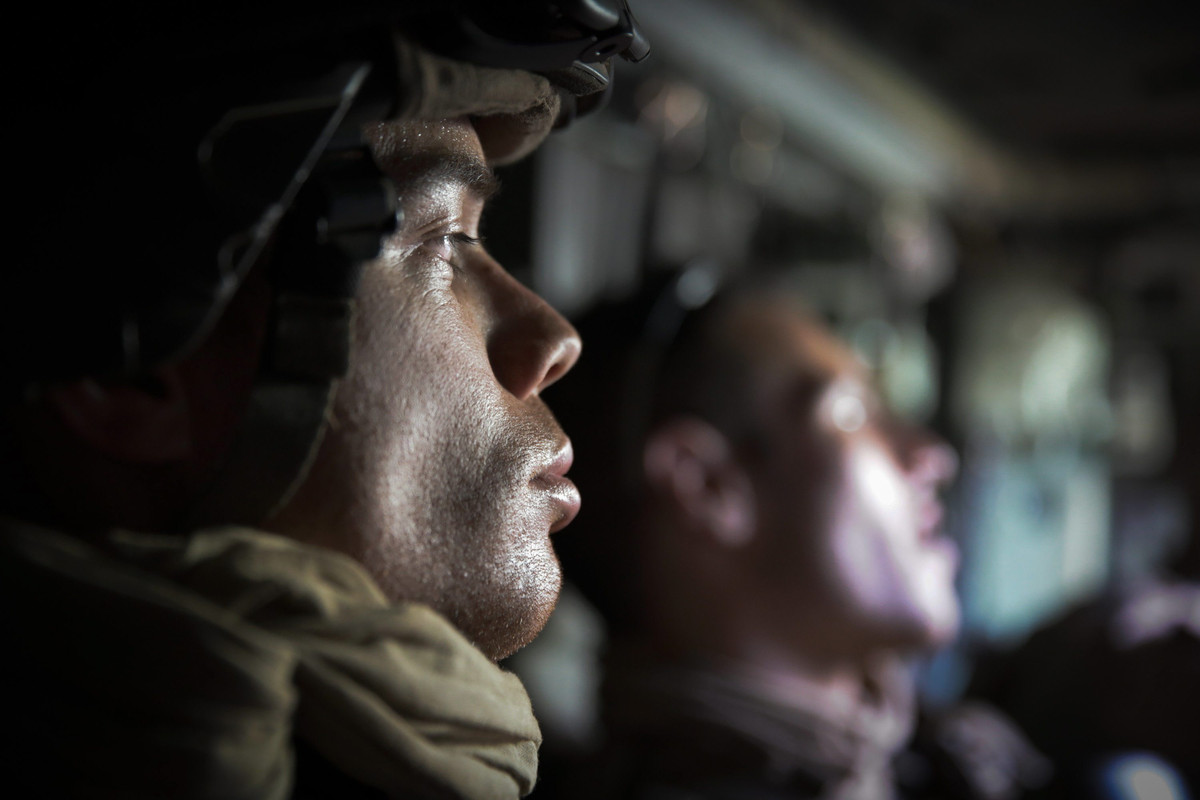 Ordinary civilians are being armed and trained by the military — Photo: Maxppp/ZUMA

One of those survivors, Abdoulaye, counts the dead with his fingers. "Drissa, Boukary, Halidou... Five, they killed five people in my house!" says this farmer, who was forced to flee his village with his wife and children. He says that a neighbor, also a farmer, threatened him and other herdsmen because their livestock were passing through his fields.

"He ordered us to leave and called the VDP," Abdoulaye says. And later, he adds, "a group of volunteers" from another village shot "three Fulani herders" before his eyes.

Next door, a second witness, a 36-year-old shopkeeper, also talks about being terrified of "these armed men," whom he suspects of having killed his wife and mother-in-law. He lives about 15 kilometers from Kongoussi, and there, he says, the VDPs "rule the law."

"They have also set up a checkpoint at the entrance to the village, where they check identity cards and demand 2,000 francs (about 3 euros) if one travels at night," he says.

Heroes to some, executioners to others. Without evidence or access to these areas, where the threat of jihadist militias linked to the Islamic State and the Al-Qaeda- affiliated group Nusrat al-Islam weighs heavily, it is impossible to confirm these testimonies.

What is clear is that in war without an obvious front, and where the conflict is forever aggravated by a cycle of reprisals and impunity, the actors of violence multiply. And the victims, of course, are the people of the Sahel. Indeed, since 2012, nearly 7,000 civilians have been killed in Burkina Faso, Mali and Niger, according to ACLED.

Citing "security reasons," Furkina Faso's Ministry of National Defense did not respond to a request for comment. Several human rights organizations have spoken out, however, and say they're concerned about a "lack of transparency" surrounding VDPs.

The self-defense units are mobilized in theory to contribute "to the protection of people and property" in their villages, and only after approval by the local population in a general assembly. They're also supposed to be under the supervision of the Ministry of Defense, and never chosen along ethnic lines. But as Ousmane Diallo, who researches West Africa for Amnesty International, explains, the selection process is often opaque.

"There is ethnic polarization, with a divide between indigenous and non-indigenous communities," Diallo says. "Also, the fact that some act outside their area of residence and autonomously from the security forces feeds the cycle of violence."

Since February, ACLED has counted about a 100 summary executions attributed to volunteers and Koglweogo, a Mossi-majority militia created in 2013 to fight against crime and to compensate for the "vacuum of the state." Members of this group are regularly accused of abuses; they are suspected of killing at least 43 civilians, most of them Fulani, on March 8 in the north of the country.

There may be isolated attitudes of some that tarnish the image of the volunteers.

Several security sources are concerned about the recruitment of these "bush guards" into the VDP and fear a loss of state control. As one officer notes: "We gave them weapons, we taught them how to use them, but how will we get them back?"

In the run-up to the presidential and legislative elections on Nov. 22, others wonder about the role these armed civilians will play in securing the voting in a country where larges swaths of territory are basically inaccessible.

"They risk being used for electoral purposes and disrupting free expression in some polling stations," says William Assanvo, researcher at the West Africa office of the Institute for Security Studies.

Colonel Karim Ouili insists otherwise. "All VDPs are legally and operationally supervised," he says. "They are trained to respect human rights and have been the subject of a morality survey, even if there may be isolated attitudes of some that tarnish the image of the volunteers."

But in the Sahel region, Fulani villagers report about not being able to join because of their ethnicity. "I thought Burkina Faso belonged to everyone," says Abdoulaye, the farmer who says VDPs killed five people in his house. "Without weapons to protect us, we will have to flee again to avoid dying."

A Long But Not Impossible March Toward The End Of Tyranny

After Latin America and Europe, the Middle East and Africa want to bury their dictatorships. But ...

Thomas Sankara, the Marxist icon of the 1980s, was killed in a coup by now ousted Burkina Faso le...