Trump Or Biden? What's At Stake For The Rest Of The World

From security and trade to COVID and climate change, the candidates differ on nearly every global topic. On Nov. 3, the world will be holding its collective breath.

PARIS — The weight of the U.S. on the rest of the world is worth remembering every presidential election cycle. And this year, the difference is particularly stark between the two candidates on everything from global trade to climate policy to cooperation on fighting COVID-19 — not to mention war and peace.

In the contrasting choice between Donald Trump and Joe Biden, Americans will choose who will govern a country that still has unrivaled global influence, with a fundamental choice between engagement or retreat — and whether America is ready or not to abdicate its role as singular world leader.

We've put together a rapid tour du monde to compare what a Democratic or Republican win would mean in the years ahead:

The election stakes in what is still the world's largest economy are raised this year by the stark contrast between how the two candidates view international trade, with a likely continuation of President Trump's aggressive protectionist policies on the one hand and a Biden quest to resume U.S. global trade on the other.

Old alliances at stake: With the Trump administration focused on shrinking its growing deficit in goods, a Republican win risks continued entrenched conflicts with the European Union over airline subsidies and agricultural trade barriers, among other issues.

• Even if stock markets seem to be swaying for a Trump win given his corporate tax policies, Annika Winsth, chief economist at Nordea Bank in Sweden, notes that European businesses care more about import duties, and thus are banking on a Biden win with the expectation of a roll back of the current protectionist policies.

• Italian professor Massimo Morelli of Political Science at Milan's University of Bocconi adds that a Democratic win would mean healthier redistributive policies with fewer negative impacts on efficiency and equality around the world.

What to do about the WTO? The election outcome will affect the U.S. relationship with the World Trade Organization, which has been damaged by the current administration's sidestepping of regulation and its view that the WTO violates American sovereignty.

• In Argentinian outlet Trade News, Uruguayan expert in international trade Ignacio Bartesaghi says that a Biden win would not guarantee improved relations between the U.S. and the World Trade Organization.

• While it was the U.S.-China trade war in 2018 that poked holes in the WTO's dispute settlement system, Bartesaghi argues that a Democratic administration would not have an interest in backtracking the "progress" made on behalf of the U.S. Rather, he predicts Biden will try to find new ways around WTO regulation.

One less ambivalent question is how the election outcome will affect the health of our planet. In a move that set the tone for his administration's stand on environmental policy, Trump announced in July 2017 the U.S. withdrawal from the Paris climate accords. The move came months after drastically cutting funding for the Environmental Protection Agency. This year too, the White House's proposed 2021 budget includes a 26% EPA budget cut that would eliminate 50 agency programs, as well as a proposed $470 million reduction of government funds to the Land and Water Conservation Fund — which would leave it with only $14.7 million to spend.

• David Zahn, head of European Fixed Income, points out that Biden's focus on climate issues could work to bring his country closer to Europe. Biden has not only pledged to rejoin the Paris agreement, but has unveiled a $2 trillion climate-change plan, which embraces clean energy and cutting fossil fuel emissions while improving infrastructure for renewable energy.

With the Trump administration's handling of the coronavirus crisis best defined as a failure to implement a coherent national strategy, analysts largely agree that a Democratic win would benefit both the U.S. and the rest of the world in the fight against COVID-19.

• Biden would likely put an end to the hamstringing and underfunding of public health agencies and global efforts at coordination of vaccine development.

• A Democratic president will almost certainly reverse Trump plans to withdrawal the U.S. from the World Health Organization. 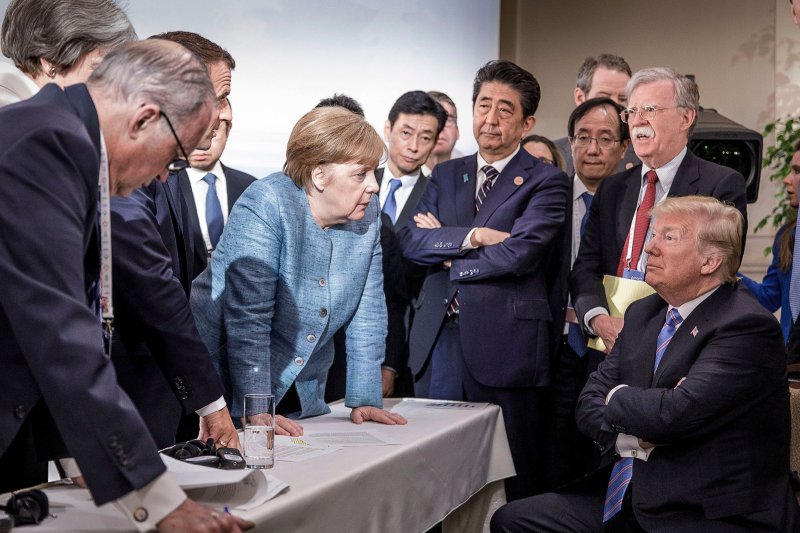 Foreign policy issues (and even terrorism) have played a relatively minor role in this campaign. Nevertheless, the destabilizing effect of COVID-19 on international order — coupled with economic recession and changing global power dynamics — still make the U.S. view of its role in the world a consequential question for international security. Some countries predict that a Biden administration would offer a reprieve for the U.S.-led international order after the past four years of sniping and retreat.

• European self-sufficiency: In Europe, Politico editor Paul Taylor argues that, regardless of who wins, the old U.S.-EU relationship will never go back to what it once was as Washington no longer has the bandwidth to help solve all of the region's problems.

• In the case of a Republican win, Trump's trade war strategy and inward-looking policies are set to continue, further alienating the U.S. from Europe.

• Meanwhile, Biden is likely to return not only to the Paris climate agreement, but also to some form of the Iranian nuclear deal, and reaffirm unequivocally NATO's mutual defense clause.

• Yet, Taylor points out, Europe will still have to step up and play a more active role in both regional and global politics, as a Biden presidency won't mark a return to the post-World War II era in which Europe could afford to live comfortably under the American umbrella.

No more American hegemony: Gerard Araud, a former French ambassador to Washington, argues that Trump's nationalist isolationism is not an aberration but deeply rooted in historic U.S. suspicion of foreign entanglements: "Whoever ends up in the White House in 2021, there will be no return to liberal interventionism or to global American hegemony."

• French President Emmanuel Macron has also pleaded for more European self-sustainability. At the Munich conference in February, Macron urged Europeans to see challenges like Russia and China through a European lens, not a trans-Atlantic one, and to do more to create a serious culture of security and self-reliance, reported La Croix.

The Russian love affair: After four years of Donald Trump doing all he could to warm up to Vladmir Putin, analysts expect that a Biden victory would increase tensions between Washington and Moscow. Russia is already operating under international sanctions on some key sectors, and a Democratic win could mean both additional sanctions and a renewed U.S. commitment to NATO.

• However, Mike Winnerstig, Head of Security Policy at the Swedish Defence Research Agency, points out that Trump's security strategy has more quietly been centered on a return to a rivalry between superpowers, which could come to harm relations with Russia in the long term.

• Writing in Swedish Goteborgsposten, Winnerstig notes that a rivalry with China and Russia will also be the case if there's a Democratic win. But while Biden has been forceful in his Russia rhetoric, he has also expressed a commitment to renew the Russian "Reset" of the Obama-era which could ease tensions.

• Tensions between Russia and the U.S. also have security implications for countries around Europe. For example, Winnerstig doesn't perceive Russia as an immediate threat to Sweden, but rather to countries like the Baltics where a large part of the financial sector is controlled by Swedish banks.

Contrasting opinions in the Middle East and Asia: While Trump has earned the opprobrium of most European partners, there are parts of the world where he is quite popular. Countries like Saudi Arabia and North Korea might fear that a Democratic win could entail closer scrutiny of their human rights records and military actions.

• Kayhan London reports that the leadership in Iran is largely rooting for a Democratic win, which they hope will end Trump's crippling sanctions.

• Many Israelis appear to be hoping for another term for the Republican.Throughout his tenure, Trump has moved the U.S. embassy in Israel from Tel Aviv to Jerusalem, withdrawn from the Iran nuclear deal, stepped up pressure on Tehran and sponsored peace accords between Israel and several Gulf countries.

• According to a recent poll by I24news, 63.3% of Israeli citizens believe that Trump will be a better president for their country, while only 18.8% of them have the same feeling about Joe Biden.

• But according to Israel-born writer and historian Gil Mihaely, the most interesting aspect of the poll is that only 43.5% think that a Biden win would change the longstanding relationship. "There is no concern in the sense that people fear a Democratic win," Mihaely says. "On the other hand, there is a certainty that if Donald Trump is elected, it will be better."

Brothers in arms Central to the current administration's foreign policy has been the ramping-up of arms sales, with exports of major arms increasing by 23% between 2015 and 2019 compared to the previous four years. While this has helped exacerbate conflicts in places like Yemen, it has also strengthened ties with old allies in the Middle East and North Africa.

• While Saudi Arabia remains the overall top customer, Morocco has become the largest purchaser in North Africa and the Middle East.

• In an interview in H24Info, political scientist Mustapha Sehimi and director of the Moroccan Institute of International Relations Jawad El Kardoudi agree that a Republican win would mean continued harmony between Washington and Rabat.

• According to Sehimi, a Biden win could cause protesters against the occupation of Sahara to remobilize, and also adds that a reelection of Trump could be a favorable factor in normalizing Morocco's relations with Israel.