Trump Or Biden: 15 World Leaders, Who They Are Rooting For

Every U.S. election carries consequences beyond America's borders. But Nov. 3 stands out for multiple reasons: a lethal pandemic has killed more than one million people across the world, once thriving economies are in tatters, U.S. isolationism has created an international power vacuum that is allowing right-wing autocrats to thrive across continents. And then, there's Trump.

What's at stake: Having become a de facto leader for many of the world's populists, Trump has recently signalled that after the election on Nov. 3, an eventual transition of power in the case of his defeat might not be peaceful. Yes, democracy itself is on the line. For this and many other reasons, the world's eyes have focused on the U.S. campaign — and that includes presidents and prime ministers everywhere.

Clues and confessions: Of course definitive conclusions about whether a world leader favors Joe Biden or Donald Trump are hard to come by: diplomacy and the sheer fact that they will have to be prepared to work with either man induces many to hide their cards. Still, some have left breadcrumbs (or explicit statements) behind, and others we can quite easily surmise. We followed them to bring you our best bet about whether top world leaders are leaning more to Team Trump or Team Biden.

We all remember that viral schoolteacher-telling-off-a-naughty-student photo at the G7 Summit in 2018. 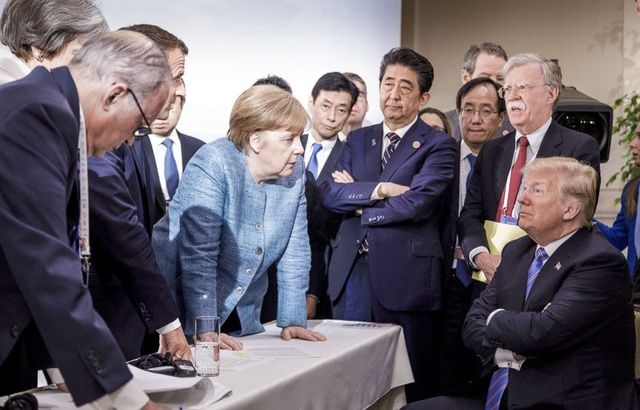 Relations between Angela Merkel and Donald Trump have only gone downhill since — hitting a new low over the summer with Trump's decision to withdraw about 12,000 U.S. troops from Germany. And though digs from the ever-composed Chancellor have so far been of the indirect kind (urging people to not rely on "fakes over facts", or more recently warning that the fight against the coronavirus pandemic couldn't be led "with lies and disinformation") Merkel has made very little mystery of her disdain for Trump's swashbuckling way of leading his country. 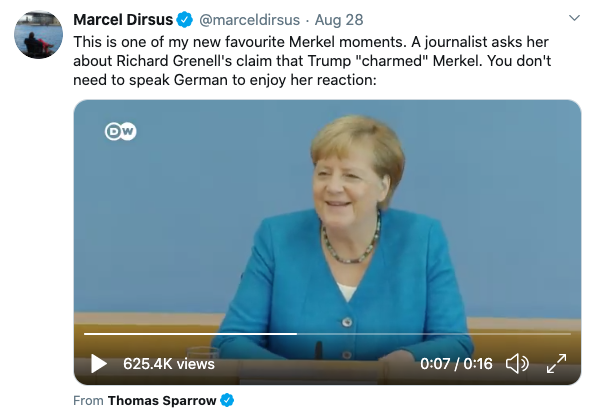 So would Angie like American voters to give Trump das Boot? Like 76% of her fellow Germans, there's a good chance that ja, she would.

It's true that Modi and Trump are in sync. As Sushil Aaron wrote in The Wire: "Trump has, in effect, fashioned a new form of international order, marked by American distraction and detachment from the world. And in doing so he has created a space and a climate where right-wing authoritarian rulers elsewhere can thrive." And it's hard to deny that Modi fits that bill, much like Trump, pushing the most basic limits on democratic rule on a nearly daily basis.

During a grape harvest in Jastrebarsko, Zoran Milanović, the president of Croatia, did not mince words as he spoke surrounded by foreign diplomats including the U.S. ambassador. Milanović denounced comparisons made between him and President Trump, saying "I consider it an insult. I neither encourage violence against minorities nor support white supremacists. What is similar here?" He said Trump has ruined the U.S.'s reputation and he much more relates to Joe Biden, particularly his working-class background and Catholic faith. And he didn't seem concerned about stating his opinions: "Some will say that I should be careful about what I say, because they will hold it against us. But that's the only way to go."

If you remember the bully in second grade who pushed you out of the way to be on the front row in the class photo, there's a good chance Montenegro Prime Minister Duško Marković remembers too.

Beyond the obvious similarities — questionable hairstyles and the pretence to incarnate the will-of-the-people — there is more nuance in the relationship between Boris Johnson and Trump. In 2017, Johnson said he thought Trump was doing "fascinating stuff." Policy-wise, Trump has been a vocal supporter of Brexit, which is at the core Johnson's entire political project. On a visit to London before becoming a presidential candidate, Biden admitted that "Had I been a British citizen, I would have voted against leaving … U.S. interests are diminished with Great Britain not an integral part of Europe." An existential threat to British isolationism and its hero.

Still, a closer look has shown Johnson carefully distancing himself from the U.S. president over the past two years. After Trump publicly endorsed Johnson, the British PM rebuffed him by saying it was "best for neither side to be involved in the other's election campaigns." Johnson also earned some sympathy support after showing some humility in his struggle to recover from COVID-19 — very different from Trump's. A recent report by the Times of London even suggested Johnson and his team were secretly "desperate" for Joe Biden to beat Trump.

By all appearances, it's a Western Hemisphere love story. Trump said he loves how Bolsonaro uses the term "fake news" and attacks the media. Bolsonaro enjoys being called the "Trump of the Tropics." Bolsonaro agreed to let the U.S. use space launch bases in Brazil for commercial reasons. What did he bring home in return? A MAGA cap, the Brazilian press joked at the time. And in fact, Bolsonaro has worn a Trump capseveral times since the episode. Try that on for size ... 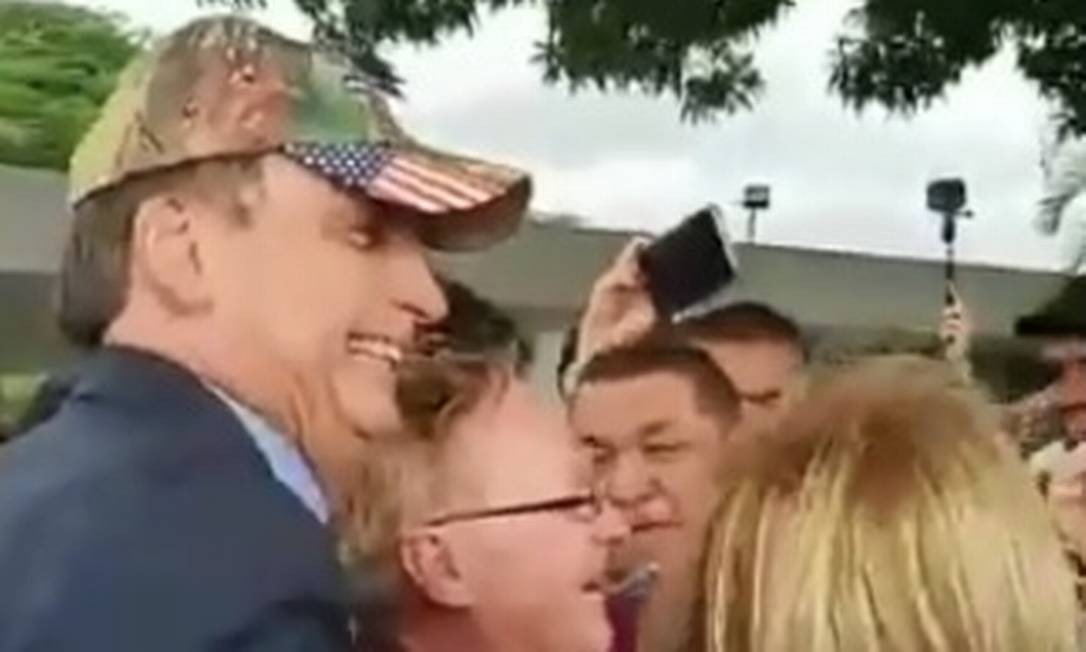 Trump has been a boon for Benjamin Netanyahu's aggressively nationalist policies, endorsing Israel's illegal expansion into the West Bank and Golan Heights. The U.S. even broke with international agreements and diplomacy to recognize the disputed city of Jerusalem as Israel's capital. The "thank you" card? Netanyahu named a whole settlement after Trump …

"Some in Tehran believe that if the country can survive Donald Trump, it will have earned itself immunity, like a patient or an evolved microbe," Hamed Mohammadi wrote recently in Persian-language media Kayhan London. Much of the crisis revolves around the 2015 nuclear pact the regime made with Western powers, which Trump pulled the U.S. away from in 2018, introducing new sanctions for the country. Biden has recently lambasted Iran's human rights violations, a sign that negotiations might be uphill even under a different U.S. president. Still, Khameini can hope a return of the Democrats to the White House could help salvage the 2015 pact and bring some much needed relief to his economy.

While the Philippines has taken a more active role in preventing the propagation of Covid, the men's common leadership style is hard to deny. And while Philippine President Rodrigo Duterte has complained about U.S. hypocrisy, ill-treatment and ageing weapons, he said back in February that Donald Trump is "a good president and he deserves to be re-elected."

The Kingdom has worked hand-in-hand with administrations from both parties for decades. Still Trump and Crown Prince Mohammed bin Salman seem to have made rather heavy bets on each other, beginning with Trump making Riyadh his first foreign destination after becoming president. Bob Woodward's new book Rage reports that Trump protected the Saudi Crown Prince after the assassination and dismembering of the Washington Post columnist Jamal Khashoggi in 2018, with the U.S. president reportedly saying: "I was able to get Congress to leave him alone. I was able to get them to stop." And if we keep in mind that after Khashoggi's murder, Trump bypassed Congress to sell roughly $8 billion in arms to the Saudis and the United Arab Emirates, Trump's verbal promise for a "strong defense" has likely secured the Saudi king's full support too.

While President Mnangagwa once welcomed Trump with open arms, we are unsure if the invitation still stands. However, with upwards 85% of Zimbabweans facing unemployment, Mnangagwa might still have his hopes on recreating friendly relations — by offering Trump land to build a state-of-the-art golf resort, for instance?

Look, how would you feel about a foreign president saying your country is full of "horrible people"? A president that your regional enemy has worked hard to see elected?

Ukrainians ache to see the end of the Trump presidency, and they have good reason. Apart from the insults (yes, he really said that) and the stain of impeachment that began with a telephone call to the newly elected Ukrainian president, Trump has acted as a multiplier for the existential dangers since the country's independence from the Soviet Union in 1991.

Before the 2016 U.S. election, Orban was the first European prime minister to publicly endorse Donald Trump, whom he said he liked because of his anti-terrorism proposals and his opposition to "democracy export" in less democratic parts of the world.

If that sounded ominous at the time, it sounds even malicious in hindsight. In the last four years, Orban has hollowed out Hungarian democracy as best as he could. The EU has started proceedings against him for everything from violation of media freedoms to stripping minorities of their rights to manipulating the electoral system and restricting academic and religious freedoms.

In September, Orban — now in his fourth term overall, the third in a row — made clear he wants four more years of Trump. "What the president represents is good for Central Europe, which is why we are rooting — at least me, personally — for him to win the election," he said.

This one is easy, right? Trump spent a large part of his first three years in office challenging China on trade, and the fourth year on blaming China for the coronavirus. Xi Jinping certainly doesn't appreciate the nasty words, or the more recent cozying up to Taiwan. A Biden victory, however, won't be smooth sailing for Beijing as the Democrats now widely agree that an adjustment on trade and other matters was indeed necessary. And the Republicans will pounce if there's any sign of going soft on China. And even if Xi doesn't have to worry about reelection (recent signs point to him planning to serve for life), it's always nice to have a bête orange from abroad to rile up domestic support.

Trump Or Biden? What's At Stake For The Rest Of The World

From security and trade to COVID and climate change, the candidates differ on nearly every global...

QAnon Worldwide: A Fringe Spreads To 7 Countries, And Beyond

What began as a small U.S.-based conspiracy theory on the fringes of the internet is shaping up ...