Trump For Christmas, A Grim Update For My Friends In Europe

Impeachment is coming, and other failed predictions.

WASHINGTON — Just a month into Donald Trump's presidency, my European friends and colleagues were already asking what I thought of the unusual behavior of 45. As I'm no expert on American law or the constitution, I could only give them my impression as a political observer, and U.S. resident. Trump, after moving into the Oval Office, continued to tweet his seemingly thoughtless statements, and act in an unpredictable and senseless way, far from the norm of presidential behavior.

It was my belief that neither this country nor the world could afford to have a superpower like the U.S. led by such an erratic person for any long period of time. And since the White House did not make Trump more presidential, my gut told me that he would soon hit a wall and there would be somebody, somewhere, somehow who would invite him to leave office. I could not imagine how this irrationality could last more than a year. He will be out by Christmas, I kept saying.

I was naive, but just ten months ago, back in February, this world was still a better place. It's a wonder if we'll ever be able to get it back. So long as Trump occupies the Oval Office, we have no way of knowing when we will at last have hit the bottom of this degradation. More about this later.

To my mind, Trump's political story should have ended the moment America learned about his obscene recorded remarks to Billy Bush. The timely release was just week before the election. But Americans, many of them fed up with the political establishment and the unappealing Democratic candidate, wanted to give Trump and themselves a chance for change. They voted for him knowing how vulgar and rude he is. Did they think that only a reckless person like Trump could make a difference? They were right.

The White House is already decorated.

The change started on day one with war declared against America's own intelligence agencies. Again, we were not able to comprehend why on earth a new arrival in the White House would attack the intelligence community, whose job is to protect the President and the country. Surely, it is not because Trump is a peaceful anti-military anarchist! No. In the White House, Trump surrounded himself with many retired generals though he fired one when forced. Michael Flynn, his security adviser, was ousted because of his proven secret dealings with the Russians. As we now know, Trump's attack on the intelligence community was an impulse, a self-protective instinct. And it might just work.

Trump will not be impeached by Christmas. The White House is already decorated and nobody would think it appropriate to dismantle the forest of illuminated Christmas trees that Melania has planted before the holiday season is over. But the word impeachment (just Google "Trump impeachment") is on everyone's tongue. This, of course, does not mean that it will come easily, fast and painless — or at all. Impeachment is a long political process that builds to a consensus that leads to a vote in the House first, and the judging majority in the Senate after.

It is a long and complex procedure, that proves – no matter what we may think of the U.S. recently – the country still has strong democratic mechanisms in place. You may learn, from this great review on the American presidents who did not complete their mandate, that American history has more presidents assassinated than impeached. It took the country almost two years to build the consensus for Richard Nixon's impeachment. In order to avoid it, Nixon resigned, while Bill Clinton was impeached by the House, and then acquitted by the Senate. 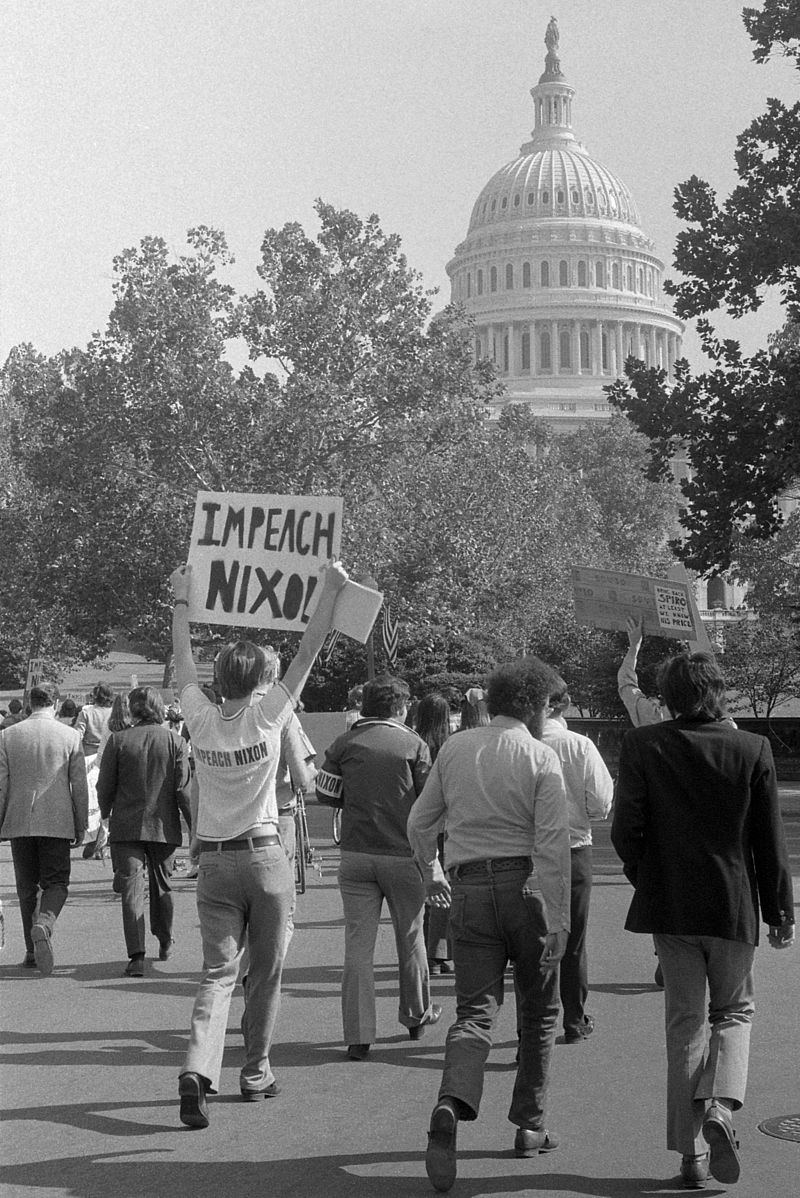 The seriousness, but also focus on, the impeachment-seeking nation will depend on constructing one forceful argument before it asks Congress to vote. In short, the critics will have to reduce the impeachment menu and join forces. This might not be easy to do when the occupant of the Oval Office is as the Italian would say a "mina vagante" (loose cannon), who creates then multiplies damage. Experts suggest impeachment can only come when there is one impenetrable item chosen from the vast menu: a smoking gun.

The most concrete and stringent investigation that is already penetrating the inner circle of the White House is the so-called Russian probe. It started with the Russian meddling in last year's elections, with illegal communications between people responsible for Trump's campaign and close collaborators of Vladimir Putin. Two of Trump's campaign managers are now collaborating with the FBI, acting as important witnesses from inside the president's circle. There is no doubt that special counsel Robert Mueller is investigating the possibility that the president was obstructing justice. For readers not familiar with this passionate topic, that revives American memories of the Watergate investigation and Nixon's resignation, Foreign Policy has a short update on the latest.

With the investigation closing in on Trump, the president's team of lawyers are getting nervous, and so is the president, especially now that members of his own family are being questioned. Trump's relentless pressing to stop the Russia investigation, which began with the firing of the director of the FBI, has vaulted the cause of special counsel Robert Mueller not only to investigate the president's possible obstruction of justice, but to probe his prior business dealings in Russia.

The New Yorker reported: "On Tuesday, the German newspaper Handelsblatt and other media outlets reported that Mueller's office has demanded financial records from Deutsche Bank, a large German bank that is one of the biggest lenders to companies associated with Trump, and that has also had controversial ties to Russia. The news reports said that Mueller's office issued a subpoena to the bank earlier this fall; the impression was that the bank, despite its public refusal to confirm any details, was willingly coöperating with the investigation."

The magazine also quotes Sir Richard Dearlove, a former head of Britain's spy agency, MI6, who said: "What lingers for Trump may be what deals — on what terms — he did after the financial crisis of 2008 to borrow Russian money when others in the West apparently would not lend to him."

An old rumor had it that Deutsche Bank has been used to channel Russian financial support to Trump when he was on the edge of bankruptcy. Some years ago, one of the Trump's sons openly admitted that the Trump organization received Russian financial help, a fact that his father consistently denied. However, Deutsche Bank has very tight ties with Trump and has since 1998, when it loaned him about $2.5 billion. The last loan of $200 million was for the renovation of the International Trump Hotel in Washington DC, just around the corner from the White House. Trump obtained a lease from the federal government for more than 60 years.

But whether Deutsche Bank was channeling any Russian money to Trump is the question that Mueller is now trying to answer. The former FBI director seems to be a very thorough investigator, according to the Washington Post. His silence, prudence, and systematic work have become the stuff of Washington myth, especially against the daily blare of the cable networks, which seem to be unaware of the fact that their reporting is mostly just an echo of the president's tweets. However, it is interesting that Mueller's investigation path is slowly merging with the conspiracy theory of now-popular Seth Abramson, a professor at the University of New Hampshire, who tweets stories that read like thrillers.

Abramson turns the current complex and byzantine sounding events into a simple and fascinating reading. Abramson's tweets link copiously to sources, but some mainstream media have nevertheless dismissed his conspiracy theories. It goes, in short, like this, writes the Washington Post:

After trying for many years to expand his business empire into Russia, Abramson asserts, Trump visited Moscow in 2013 to personally meet agents of Russian President Vladimir Putin, using his beauty pageant as cover.

There, Abramson writes, a secret deal was struck: Putin agreed to open up his country's rich real estate market to Trump, and Trump agreed to campaign for president while promoting pro-Russian policies.

Simple as that. And everything that has happened since — the election hacking, Trump's improbable win and a special counsel's investigation into his campaign and administration — follows from that deal, in Abramson's telling.

The game is afoot. I wonder if there is something more we can do but watch. It's almost Christmas, and no impeachment nor war with North Korea. Not yet, at least.

Bernie Or Bust: Do The Democrats Have A Chance To Beat Trump?

Ahead of Super Tuesday's crucial Democratic primaries, a look at the unlikely "broken clock" fron...

Work → In Progress: Finding A Job In The Matrix

In early civilizations, landing a job amounted to interning until your employer died. ...