How The Christian Right Can Believe In Donald Trump

LYNCHBURG — Liberty University President Jerry Falwell Jr. stood before more than 10,000 of his students and some visitors on Monday morning and laid out the case for why conservative evangelicals like them should support a presidential candidate like Donald Trump - the cursing, self-promoting, thrice-married billionaire who bungles Bible references.

It's not that Trump is the most religious or pious of the candidates, Falwell said, although he described Trump as a "servant leader" who "lives a life of helping others, as Jesus taught." It's that Trump is a savvy businessman who "speaks the truth publicly, even if it is uncomfortable for people to hear" and is not a puppet for major donors.

Falwell, who said his comments are not an endorsement, compared Trump to Ronald Reagan, the actor-turned-politician whom his father once supported over Jimmy Carter, a Southern Baptist Sunday school teacher.

"When he walked into the voting booth, he wasn't electing a Sunday school teacher or a pastor or even a president who shared his theological beliefs; he was electing the president of the United States with the talents, abilities and experience required to lead a nation," Falwell said of his father, the late televangelist Jerry Falwell. "After all, Jimmy Carter was a great Sunday school teacher but look at what happened to our nation with him in the presidency."

Trump, a mainline Presbyterian, is unexpectedly popular with many evangelical voters, who often play an outsized role in some early-voting states. These are the same sorts of voters who are attracted to Sen. Ted Cruz, R-Tex., a Southern Baptist and son of a pastor who frequently discusses his faith on the campaign trail. As the race for the Republican presidential nomination narrows, the competition between Trump and Cruz is best illustrated by their fight for the votes of evangelicals.

In national polls, Trump is either leading among evangelicals or roughly even with Cruz. But in Iowa - home to the Feb. 1 caucuses - Cruz has a substantial lead.

Some of Trump's outreach efforts to evangelicals have seemed forced - like when he proclaimed the Bible the greatest book ever written, even greater than his own books, but could not name his favorite verse. Or when he handed out photos from his childhood confirmation at a rally in Iowa. Or when he commented that Cruz's father is from Cuba and "not a lot of evangelicals come out of Cuba."

In speaking at Liberty on Monday, students snickered as Trump referred to "Two Corinthians" instead of "Second Corinthians," and Cruz campaign staffers joked about the mistake on Twitter.

Liberty claims to be the world's largest Christian university and students are required to attend a chapel service three times a week called "convocation." It's here that Cruz launched his presidential campaign. Former Florida governor Jeb Bush, retired surgeon Ben Carson and Democratic presidential hopeful Bernie Sanders have all been recent guest speakers. Trump first spoke at a convocation in 2012 and has kept in close touch with Falwell. 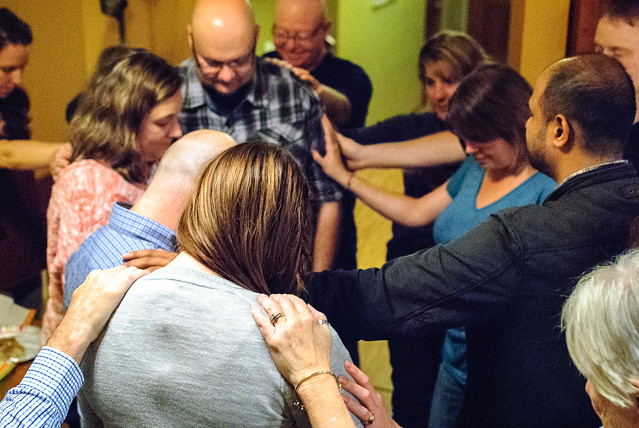 On Monday, the Liberty audience was heavy with fans of Cruz and Carson, a member of the Seventh-day Adventist Church. The crowd was more likely to politely laugh at Trump's jokes than boisterously cheer his campaign platforms. Those who plan to vote for Trump often said they are doing so for reasons other than his religion, echoing Fallwell's opening thoughts.

Jonathan Cody Hildebrand, a 19-year-old sophomore at Liberty studying marketing, said he likes Trump, Cruz and Carson - but he plans to vote in the Virginia primary for Trump because he has the best chance of beating Democratic front-runner Hillary Clinton.

"What I do know is that the Republican ideals line up with my Christian faith, so anyone on the right is better suited for me than anyone on the left," Hildebrand said. "I know a lot of people speak of his ego and how that's not a Christian value - but I honestly think his ego is what gets things done. I'm okay with an egotistical president. He wants to be the best, and I think for that reason, he gets things done."

Kenny Brown, 62, who owns a company that makes machine parts, said that he respects the religious beliefs of former Arkansas governor Mike Huckabee (R) but that Huckabee's "spiritual beliefs are so hard, so strong" that they could get in the way of leading the country. Brown said he likes that Trump has a good set of guiding morals, but would put the good of the country above all else.

Maria Teague, the 48-year-old mother of a Liberty student, said that right now Cruz is her top pick because of his "Christian values," but she also likes that Trump is an outsider who isn't tied to big donors.

"I just feel like Trump will stand up for our country versus some of the regular politicians that we've had for years," said Teague who drove more than four hours from North Carolina for the event. "He doesn't have anything to gain - he's got all of the money that he ever needs, he has all of the popularity that anybody would ever want. I mean, what other reason would he want to be president?"

Teague isn't convinced by Trump's claims of religious devotion, however: "He didn't know where his favorite scripture was - that kind of showed me that he was kind of bluffing that one a little bit."

Some high-level evangelical leaders are baffled at why their colleagues and followers would embrace Trump. They are concerned by Trump's personal history, inflammatory comments about minorities and unwillingness to seek forgiveness or admit fault.

"The late Dr. Jerry Falwell Sr. would be rolling over in his grave if he knew the son who bore his name had endorsed the most immoral and ungodly man to ever run for President of the United States," John Stemberger, president of Florida Family Action, said in a statement on Monday. "Trump is a thrice married owner of casinos with strip clubs and would give us the first 'First Lady' who has proudly posed in the nude while supporting gay marriage and funding Planned Parenthood with taxpayer money."

Russell Moore of the Southern Baptist Convention said he was "disturbed" Falwell invited Trump to speak on Martin Luther King Jr. Day, and said Trump's comments about immigrants and African Americans constitute "race baiting." As Trump spoke, Moore posted a stream of critical comments on Twitter: "Politics driving the gospel rather than the other way around is the third temptation of Christ. He overcame it. Will we?" In another tweet he wrote: "This would be hilarious if it weren't so counter to the mission of the gospel of Jesus Christ."

Photo Of The Week: This Happened In Washington D.C.

The United States has been driving news photo agency feeds around the world since last week's unprecedented scenes of a of pro-Trump mob storming the U.S. Capitol in Washington D.C. This ...

On "The Trump Question" - The Burden For Biden's Presidency

The assault on the Capitol wasn't an attempted coup, per se. But the ramifications of how to hold Trump responsible are fundamental for the future of the American democracy.