Why Dieselgate Was Really An IT Problem

If cars are supercomputers, why are we not programming them for fewer emissions and speed?

MUNICH — Three years after the Dieselgate scandal erupted, the conversation about banning diesel cars drags on. It all started with an illegal emissions-defeat device that Volkswagen and other car manufacturers installed "as standard" in diesel vehicles, and whose software manipulated exhaust gas values. When politicians today discuss "hardware retrofits" and "software updates," it indicates that they consider vehicles as a functional equivalent to computers. Yet, they don't take that computerization of society to its logical conclusion.

Smartphones, door systems, refrigerators, and cars — all are computers. A modern vehicle contains an average of 100 million lines of code. By way of comparison, the Hubble space telescope functions with just about 50,000 lines of code. A car is a super-computer with wheels, on which the driving application, among others, is pre-installed. Politicians must, therefore, understand the diesel emissions scandal as what it is first and foremost: an IT problem in which the code plays a key active role.

We could discuss at length whether vehicles should also be subjected to a sort of technical inspection where not only the hardware but also the software, the algorithm, are put to the test. But by adopting the industry's rhetoric about "hardware retrofits" and "software updates" without reflecting about what it actually means, the government is suggesting to voters and customers that the problem with the manipulated devices is that they're no longer up to date — and is thus trivializing fraud. Fraud, in this case, becomes just a bug, a program error that can be covered up and corrected with the right piece of software. The code of the rule of law (right/wrong) is overarched by the binary power code.

Philosophically as well as informatically, this is a matter of ontology: the car is still imagined as a second living room, as a design object with a dignified interior, comfortable seats, and a feel of nobility. In short: as real estate. When you customize a new car, it's like looking for furniture for a new apartment. In those vehicles that are stuffed with technology, you have the feeling of sitting in the cockpit of an airplane. You don't see the CPU, the lazy code, the data tracks generated by the machinery through various control units, the emissions that — hopefully — are chased out of the exhaust pipe in accordance with the law as a result of thousands of computational operations. You can't just open the hood and look into the engine room. Modern vehicles are a black box.

Perhaps it's because of the Germans' libidinal connection to their cars, of the myth that a car means freedom, that it's still romantically transfigured. But all things considered, cars are death machines. Every year 1.2 million people die in traffic accidents, according to the World Health Organization. Another study revealed that almost 780,000 people have died on German roads in traffic accidents since 1950 — roughly the equivalent of a big city like Frankfurt.

The recently deceased French philosopher Paul Virilio, who became famous with his theoretical figure of the "polar inertia", gave the French publication Magazine Littéraire a remarkable interview in 1995 in which he interpreted the car accident as a sign of civil war. When you see SUVs race over the asphalt like armored vehicles and how their drivers believe in survival of the fittest, you could actually think of civil war scenes, where the origin lies not only in acceleration but in a general militarization of cities. According to the General German Automobile Club (ADAC), German motorists were stuck in traffic jams for 457,000 hours in 2017 — the equivalent of 52 years.Time flies, but inertia prevails in traffic jams.

Exhaust gases too are the result of an acceleration, this time of bytes and atoms. They have a lethal effect because they are toxic. According to a study by the US-based consulting firm Environmental Health Analytics, 107,000 people worldwide die every year because of nitrogen oxides from the exhaust gases of diesel vehicles. The researchers say that if manufacturers complied with the current regulations, there would be 38,000 fewer deaths every year. There's an old saying in Germany according to which "the air of the city makes you free" ("Stadtluft macht frei"), but now we have to state that it makes people ill, not free. In some cities in India, life expectancy has been reduced by several years due to emissions. 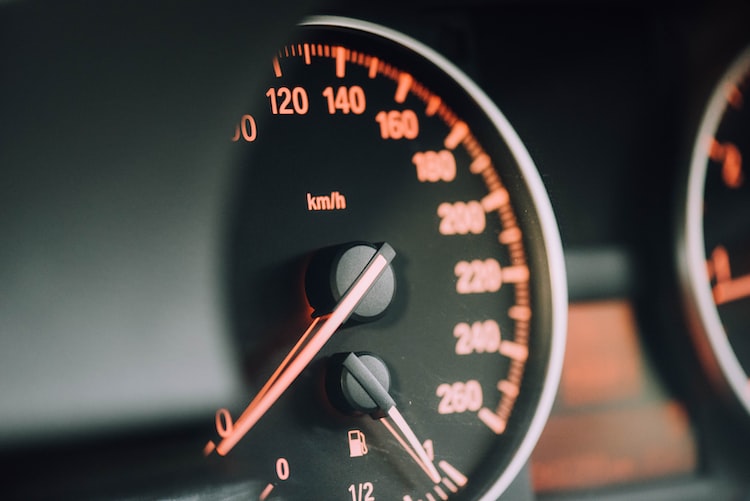 Time to slow down — Photo: chuttersnap

One can assume that this knowledge has reached the offices of the environmental authorities. A rational policy would, therefore, have to provide cars with warnings similar to those found on cigarette packets: "Driving is harmful to your health." There are certainly other sources of emissions than cars, such as industrial plants. But it would be an educational imperative to name such causal relationships. It seems as if the car lobby is more successful than the tobacco lobby in sowing doubt and obfuscating the minds of the public. The car industry is even more audacious when it advertises "environmental premiums," for example, which suggests that driving a car can protect the environment. It's like a tobacco company advertising cigarettes as "healthy."

Paris Mayor Anne Hidalgo has recently presented a courageous book entitled Breathe (Respirer) in which she pleads for the right to clean air. "People don't die tomorrow from air pollution. People die today," she writes laconically. Emissions are the third-most frequent cause of death after alcohol and tobacco in France. Hidalgo mentions a lung specialist who, before a parliamentary commission, tried to persuade MPs that diesel was not dangerous and was sentenced to six months' imprisonment on probation and a fine of 50,000 euros for false testimony.

Where everything is in motion, nothing moves.

Still, we must stop considering the diesel debate solely from an environmental viewpoint and start seeing the issue at a technological level. What is the benefit of a technology that makes mobility possible but claims the lives of thousands of people? If we accept the computer reality of cars, shouldn't we deconstruct every vehicle by standard reverse-engineering and make the software open source, since the externalities affect everybody? In the spirit of the Degrowth movement, shouldn't we ask ourselves whether less growth and speed would be a more desirable outcome for a sustainable community?

Virilio wrote in his work Speed and Politics: "The revolutionary contingent attains its ideal form not in the place of production, but in the street, where for a moment it stops being a cog in the technical machine." Setting the masses in motion is the central power technique of the dromocracy, the rule of speed. "The more masses on the road, the less need for repression: to empty the streets, it's enough to promise everyone the highway."

In this sense, the German federal government is also acting dromocratically if it wants to prevent driving bans at all costs. As long as the rivers of cars keep on flowing, everything remains in motion. The commuter still gets angry when he's in a traffic jam, but he's not deprived of his right to free travel and doesn't demonstrate. Those who drive a car don't take to the streets. And where everything is in motion, nothing moves. Mobilization becomes a form of political immobilization.

Everyone adapts to changing environmental conditions. But anyone who thinks about the computerization of society, and takes it to its logical end, must know the following rule: it's not the models that determine the reality. It's the reality that determines the model.