The Slippery Slope Of Global Warming, From A Melting Mont-Blanc Glacier

COURMAYEUR — When the alarm sounded last year, it was because the ice on the Mont Blanc, on the border between Italy and France, was moving too quickly.

Its front had broken away from the rest of the ice lobe, separated by a huge crack, and descended three meters per day. Experts feared that 250 thousand cubic meters of ice might fall on the valley, an enormous quantity that could shatter on the rocks below, causing an avalanche and arriving on homes in the Ferret Valley, near Courmayeur.

The good news is that this year, the glacier is not travelling as fast, and last year's 250,000 cubic meters of ice are a distant memory: the heat has melted most of them. Some 176,000 collapsed in smaller blocks of ice that crumbled on the underlying rocks and flowed into the river, the Dora di Ferret.

But there's also bad news: A 40-meter crevasse has formed a new serac, a block of ice at risk of toppling, that is double the size of last year's: half a million cubic meters — larger than the Milan Duomo.

The warming climate added to the problem. After weeks of sizzling heat, with the air reaching zero degrees only at 5,000 meters above sea level, temperatures nosedived on Tuesday, Aug. 4, and it snowed abundantly on the glacier.

A soccer pitch with a 30-story building erected on top of it ...

"The Planpincieux is a temperate glacier because it sits at altitudes where temperatures contribute to melting it," says Valerio Segor, a director of mountain hydrogeology within the regional authority Valle D'Aosta, which comprises Courmayeur and the Planpincieux glacier. "And the water that flows between the glacier and the rock beneath it acts as a lubricant, facilitating the glacier's downward slide."

This lubricant froze, slowing the movement down to a meter a day. But that's not, in fact, a good thing. And that's because the glacier's halt and new scorching temperatures could lead to a sudden collapse.

"Picture a soccer pitch with a 30-story building erected on top of it: That's the amount of ice that could fall down," says Segor. 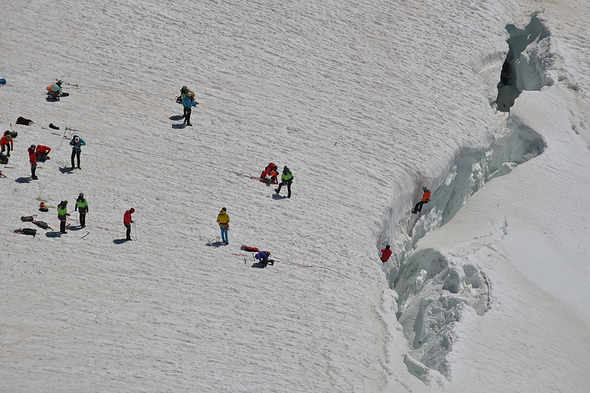 Climbers near a glacier crevasse on Punta Helbronner, on the southern side of the Mont Blanc massif — Photo: Grzegorz Galazka/Mondadori Portfolio/ZUMA

Experts at the Swiss Federal Institute for the study of Snow and Avalanches in Davos are worried, and quickly contacted their colleagues at the Safe Mountain Foundation in Courmayeur and the National Research Council in Turin.

Fabrizio Troilo, head geologist and a glaciologist at the Safe Mountain Foundation, says the water is the main danger because it could act as a sort of spring.

"The most catastrophic glacial collapses in history have probably been caused by the instability of the water flowing beneath the glacier. It happens when temperatures drop abruptly and quickly rise again," he says.

Outside, children played in summer camps, unaware of the emergency.

In case of collapse, experts have identified two areas at risk. One could face a huge avalanche; the other the ensuing aerosol. The first danger area in the Ferret Valley includes the residents of Montitaz and part of the town of Planpincieux, whose houses could be buried or swept away by the snow. The second area includes most of Planpincieux and Meyen.

Authorities have evacuated some 75 tourists and residents. A sports center in nearby Dolonne has been set up as a reception center for the displaced. "We haven't seen anyone yet," local Red Cross volunteers said Thursday afternoon. Outside, children played in summer camps, unaware of the emergency.

Residents don't seem particularly phased. Many of the evacuated also have a house in Courmayeur or have relatives to stay with. Tourists have gone home or are staying in hotels in Planpincieux outside the danger zone.

"The evacuation concerns only a part of Planpincieux and the Ferret Valley," said Courmayeur Mayor Stefano Miserocchi, who has the difficult task of mediating between protecting civilians and the local economy at the peak of the tourist season.

"The rest of the town goes on normally, and it's full of tourists," he said.

The Ferret Valley committee, which was convened after last year's emergency, has asked to refrain from using "excessive caution" and highlights that closing the valley "will bring immediate and long-term economic and reputational damage.

Lombardy Postcard, The Autumn Of Our Second-Wave Angst

MILAN — I recently spent a weekend at the Lago d'Iseo, a picturesque area of Lombardy at the ...

Trump, Berlusconi And Democratic Lessons For Everyone

TURIN — Two months from election day, we can leave no doubt: Donald Trump is taking the ...