Nir Kalkstein: My Algorithms Can Make Cash Or Detect Cancer

Having built one of the world's most successful algorithmic trading companies, Israeli entrepreneur Kalkstein now is putting his mathematical wizardry to saving lives.

TEL AVIV — Nir Kalkstein, one of Israel's most successful high-tech entrepreneurs, prefers to fly below the radar. He quietly made millions as the founder 14 years ago of Final, among the world's most successful algorithmic trading companies.

But by 2009 the super low-profile, bright mind behind this money machine came to the conclusion that he had achieved the scientific challenge he had set for himself. Moreover, he began to realize that Final was not generating value for the wider public, but was mainly using a technological advantage to fill up the pockets of its 30 shareholders.

This was the cue that led to Medial, Kalkstein's new venture. This time he is determined to rattle the medical world. Now employing 27 people, and financed personally by Kalkstein with millions of dollars every year, Medial had launched with the goal of developing an algorithmic system for early diagnosis of colorectal cancer.

"We are not the typical commercial company," Ofer Arieli, Kalkstein's business partner, told Calcalist. "We have a shareholder who committed to fund the company for the next years. So, if we are to choose between making a lot of money and saving few people on one hand, and earning little but saving many people on the other hand, we opt for the latter." 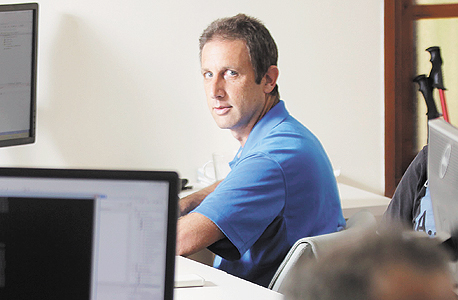 Kalkstein has told his team that even if Medial generates profit, he will reinvest it all in the company. "He doesn't need the money from Medial," notes Arieli. "He has enough."

According to the World Health Organization, every year around 15 million people are diagnosed with cancer, and 7 to 8 million die of the disease.

Just like with Final, Medial's inception required obtaining a huge database that would allow the company's analysis of historical records. Negotiations with Israel's Maccabi Healthcare Services ended with a barter: blood test data in exchange for free diagnosis services. These were then matched with data received from the National Cancer Registry in the Israeli Health Ministry, and the algorithmic models produced are subsequently used for generating an assessment of a patient's likelihood of getting cancer. Similar algorithms will be used for diagnosing esophageal and stomach cancers, and another will try to identify lung cancer.

Medial has also expanded into five additional fields: alerts for deterioration in E.R. patients, identification of possible complications after cardiac catheterization, early detection of epilepsy attacks, early detection of heart failure, and quantifying the personal risk due to a patient's general check-up.

And now Medial awaits its next milestone: for its algorithmic system to be approved by the U.S. Food and Drug Administration.

"I would have preferred you didn't publish this story now, but rather wait a year or two," Kalkstein tells Calcalist. "When you then come back we would tell you, not only about the models, but also about the people we saved. I hope it happens."

ABOUT THE SOURCE
All rights reserved © Worldcrunch - in partnership with CALCALIST

The current spiral in the Middle East is a stinging reminder for the world, and particularly the United States under Joe Biden, that the violence will always return.

Welcome to Friday, where dozens die in a stampede at a religious festival in Israel, Brazil's COVID death toll surpasses 400,000 and an owl-like bird is crowned Instagram influencer. We also look ...