The USMCA targets China's trading prowess, through arms such as the Yangshan Deepwater Port - Ding Ting/Xinhua/ZUMA

The Trump administration had more than America's commercial deficit with Mexico in mind when it demanded an overhaul of the 25-year-old North American trade deal.

TUXTLA GUTIÉRREZ — The recent evolution of foreign trade between Mexico and China is particularly relevant today in the context of China's entry into the North American market, the former NAFTA zone now renamed USMCA after a treaty overhaul.

Mexico and China are both emerging economies and important global actors, and trading relations between them are significant, both for their respective economic weights and for Mexico's proximity and close ties to the United States.

Since taking office in January 2017, the administration of U.S. President Donald Trump has shown hostility both to Mexico and China. It has repeatedly insisted on building a wall or fence on the Mexican border and initially denounced NAFTA as the "worst trade deal ever," threatening to ditch the treaty as it was.

After considerable negotiations, the treaty was eventually reformed — in itself a proof of the need for a deal, given the intensity of ties between the neighbors. The new United States-Mexico-Canada Agreement (USMCA) has yet to be ratified by the legislatures of its three signatories. 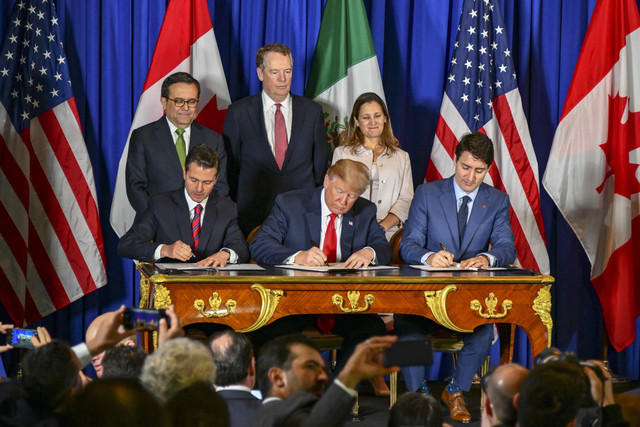 The USMCA being signed on 30 November, 2018 — Photo: Ron Przysucha/Planet Pix/ZUMA

The United States managed to include in the new treaty Clause 32, directed at China, which allows withdrawal from the treaty if other signatories engage in trade with a "non-market" country. This would be the first international treaty that is explicitly adverse to China.

With his insistence on building a southern wall and moves to curb trade with China, Trump has effectively launched an offensive against his country's most important trading partners. China is a key trading partner to all three NAFTA members and while in theory the removal of barriers inside a trading block like NAFTA makes internal trade more efficient and attractive, existing figures show that the United States has lost some market share in Mexico to China. Mexico too has lost some of its Canadian and U.S. market shares to Chinese exporters.

As a preeminent actor in global trade in recent years, China has been winning ground in the NAFTA zone without even the need for a trade agreement. Figures from UN Comtrade for 2017 show Mexico's considerable trade deficit with China, which has become its second supplier of goods behind the United States — historically in the first position. Mexico exported just over $6.7 billions worth of goods and services to China that year, and imported over $74 billion.

U.S. imports and exports for 2017 showed a similar pattern with China, and to a lesser extent with Mexico: its trade deficit with China was of $396 billion, and with Mexico close to $74 billion. Such figures help clarify both the changes made to NAFTA and how China has penetrated this massive market, principally as a supplier. And one would expect this expansion to continue, in spite of USMCA's Clause 32.

Mexican President López Obrador has made it clear that he prefers keeping the United States at ar...

For drivers in Mexico, the rule of thumb for traffic accidents is simple: el que pega, paga! In ...