In Lebanon and Iraq, two countries that Iran's clerical regime has long tried to control, some Shias are fed up with Tehran's machinations and affiliated militia groups.

There is no end for now to the rocket and missile attacks on U.S. and Western coalition forces in Iraq, where six rockets were fired in recent days onto Erbil airport in Iraqi Kurdistan. One of them landed on a Kurdish Democratic Party camp inside Iran.

So far, no group has officially claimed responsibility for the attacks. But security forces in Iraqi Kurdistan are certain they were fired from a van in the village of Sheikh Amir, used as a base by members of the Shia Hashd al-Shaabi militia.

The attack on Erbil comes at a time when the United States is planning to close its embassy in Baghdad. It also took place just one hour after the Iraqi Prime Minister Mustafa al-Kadhimi assured 25 Western and Arab diplomatic representatives that his government would do everything to protect diplomatic premises.

The Iraqi government is gravely concerned with the planned departure of U.S. and coalition forces, and al-Kadhimi's foreign minister, Fuad Hussein, believes that armed or radical groups in Iraq will interpret the Western withdrawal from Iraq as a victory, and use it to attain their goals.

The 25 representatives who met with al-Kadhimi, including the ambassadors of the United States, Great Britain, Canada, Italy and Saudi Arabia, voiced support for the prime minister's security measures and confirmed that their respective countries want to enhance security cooperation with Iraq.

In Washington, Assistant Secretary of State for Near Eastern Affairs David Schenker said the U.S. could not tolerate attacks on its personnel and cited Iran-backed militias as the chief threat to Iraq's stability. There have been more than 40 attacks on U.S. forces since al-Kadhimi's visit to Washington and meeting with President Donald Trump in late August.

Unlike in the past, none of the groups in the Iran-backed Hashd al-Shaabi militia claimed responsibility. Nevertheless, authorities in Iraq and elsewhere have little doubt that the Kata'ib Hezbollah and Asa'ib Ahl al-Haq, two groups affiliated with the Quds Forces, part of the Iranian Revolutionary guards, are behind the attacks.

For some young Iraqis, these attacks have eroded faith in current leadership. And in recent weeks, a number of people — including some who participated in last October's round of protests — presented the country's electoral authority with requests to register 15 new parties to run in the early parliamentary elections set for June 2021.

"There can be no more compromise with a political system that is like wax in the Islamic Republic's hands," a member of one of these new groups, who uses the pseudonym Abu Salah for security reasons, told Kayhan London. 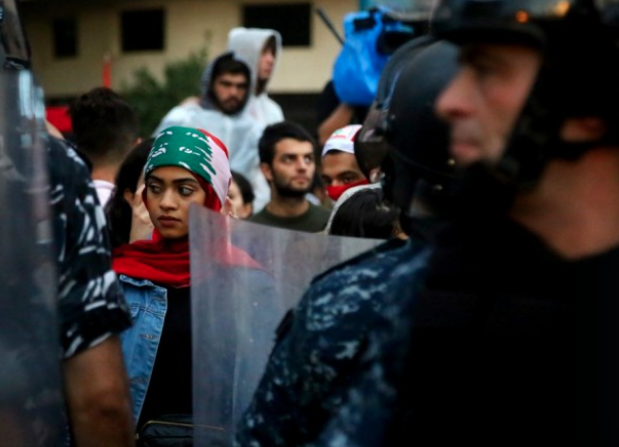 Police and protesters in October in Beirut — Photo: Marwan Naamani/DPA/ZUMA

"We're no longer prepared to sacrifice Iraq's national interests to the anti-Western policies and adventurism of the ayatollahs in Tehran," he added. "We have to push aside the Shia and Sunni politicians who serve the Islamic Republic's interests, but the path we've chosen is to use democratic and legal instruments, meaning elections. Unlike them, we're not going to murder opponents."

Abu Salah believes that Western states are also realizing that there's no point in compromising with Iran and pro-Tehran forces.

"They'll probably conclude it is time to cut off the Islamic Republic's hands in Iraq," he said. "Of course, there is a danger that in the final confrontation America will remove its soldiers and diplomats and leave us alone and hand us over to the Islamic Republic. And that wouldn't just have consequences for the Iraqis but also unwelcome repercussions for America and its allies in the region."

In the meantime, militias affiliated with the Quds force have taken to killing prominent Iraqi dissidents. In the last three months, more than 40 civil activists were murdered in different Iraqi cities. One of the latest victims was a 29-year-old doctor and women's rights activist, Riham Yaqoob, killed in Basra. A few days before the young woman's death, the Mehr news agency in Tehran had called her "an important agent of the soft war" against Iran.

Conditions are not much different in Lebanon. French President Emmanuel Macron recently sought to ease the crisis there by working with the two Shia groups allied to Tehran — Hezbollah and Amal — to form a new government. But after Mustafa Diab, the diplomat leading the effort, gave up because of excessive pressure from those militias, Macron began to use harsher words with Hezbollah, saying that as long as it keeps fighting Israel and killing civilians in Syria to aid Bashar al-Assad it can never be a respectable party in Lebanon.

Macron did point out, however, that Tehran is not to blame entirely for Lebanon's woes. He also said that there's evidence Iran actively scuppered the formation of a new government there.

Still, Lebanon's former justice minister, Ashraf Rifi, believes France should learn from recent events and conclude that to help solve the Lebanese crisis, it must shun Hezbollah and back Shias opposed to the Islamic Republic's influence.

It should be noted that in Iraq as well in Lebanon, young Shias are at the forefront of the resistance against Tehran's puppet politicians.

Just as Shias have been leading the fight in southern Iraq to curb Tehran's influence and the activities of its affiliates, they have been active in Lebanon as well, protesting against Hezbollah in places like the Shia suburb of Dahieh in Beirut, home of the militia's chief, and in Nabatieh in southern Lebanon. The demonstrations have involved angry crowds attacking the offices of pro-Iran Shia parties.

What's To Gain For Iran If Biden Beats Trump

The current U.S. president has made life decidedly difficult for the Islamic Republic. But would ...