From MLK To Olof Palme To Black Lives Matter

Protests in support of the Black Lives Matter movement, like here in Frankfurt, have sprung all over Europe - Boris Roessler/DPA/ZUMA
Carl-Johan Karlsson
WORLDCRUNCH
2020-06-05

PARIS — That people should be judged by the content of their character was one of those rare elementary-school concepts that actually stuck. It was no doubt the candor and simplicity of the idea, but it may have helped that my history teacher Mr. Hansson for once deviated from his trademark text-heavy PowerPoints — and showed us a photograph of Martin Luther King at the Lincoln Memorial from his "I Have A Dream" speech.

Either way, King's ideas would be a recurring topic throughout my education in Sweden — and have helped shape the way I think about his country and mine, having lived in both places over the past decade. And so it was that I spotted that same MLK photo taped onto a protester's placard at a public square in Stockholm, as I struggled to make sense of the events and images of the past week from my current home in France.

It is not necessarily obvious why thousands of Swedes would fill the streets to protest against racism in the States. After all, my native country has no legacy of slavery and Jim Crow laws that have left a residue of systemic discrimination against Swedes of African origin. Yet, Sweden has over the last decade seen a surge in racism and xenophobia — most clearly manifested in the now 20% support for the far-right Sweden Democrats — formed three decades ago by members of the less sanitized Neo-Nazi parties like The Nordic Realm Party and Bevara Sverige Svenskt, or "Keep Sweden Swedish." 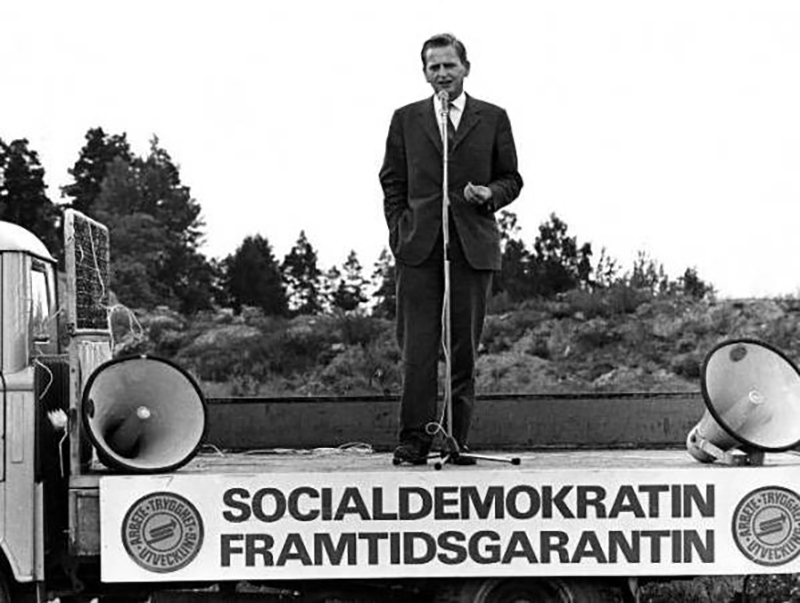 But there are also other reasons why failures in the U.S. tend to ring a distinct bell in Sweden. Despite their countless differences, the two countries share a history of prestige on the international stage, as well as, over the last few decades — a steady erosion of the same. The 1950s and ‘60s put the most reprehensible aspects of American society on global display but also demonstrated citizens' ability to reform their country. The Civil Rights Movement was in many ways, the last great American event that gave hope to countries around the world in their struggles for democracy and fairness.

The U.S.'s renunciation of its role as a world leader in the last decades has run in pace with Sweden's fading image as a social-democratic poster child. In Sweden, it's hard to point out exactly when that happened, but the 1986 assassination of Prime Minister Olof Palme was certainly a watershed. Palme's charisma and genuine pathos for the poor and oppressed, both at home and abroad, put Sweden on the global map as a humanitarian powerhouse.

It's notable that Palme often recounted that his worldview was partly formed during his time at Kenyon College in Ohio in the late 1940s, and more importantly, through a subsequent hitchhiking trip through segregated states in the American South. Lessons about basic truths do indeed travel, across both time and geography. One we are learning anew this week is that the battle for justice is never won.

It's now been four months since most of the world reached the agreement that Sweden's ...