The Isokon building back in 1934 - Isokon Plus Facebook page

A derivative of the Bauhaus revolution, the Isokon building brought modernity, and affordable rent, to conservative Britain — 85 years ago.

LONDON — There are scant signs today that a revolution once took place in Hampstead, one of London's upscale suburbs, among well-tended Victorian terraced houses and gardens with blooming shrubs. Nothing seems to indicate that 85 years ago, Jack and Molly Pritchard instigated a true uprising here.

The businessman and his wife, both of them Cambridge-educated "Hamstead Liberals", had commissioned a house to be built for themselves on Lawn Road, a house that turned all housing conventions within the United Kingdom on their head. The Isokon building was not only the first residential building to be erected with reinforced concrete, it also revolutionized European standards of building public housing and introduced modernity into Great Britain in 1934.

The Isokon (so called for its isometric and three-dimensional design) must have seemed like a building from another planet to the neighbors of this tranquil residential area. Blindingly white with the aerodynamic elegance of a transatlantic luxury liner, it rose from the uniform sea of red brick pointed buildings.

Despite the fact that the L-shaped building houses 32 apartments and, with its four floors, rises well above all its neighbors, it seems to be a lightweight construction, almost floating. The Isokon's long balconies and, for that era, large as well as numerous windows contribute to that particular appearance. 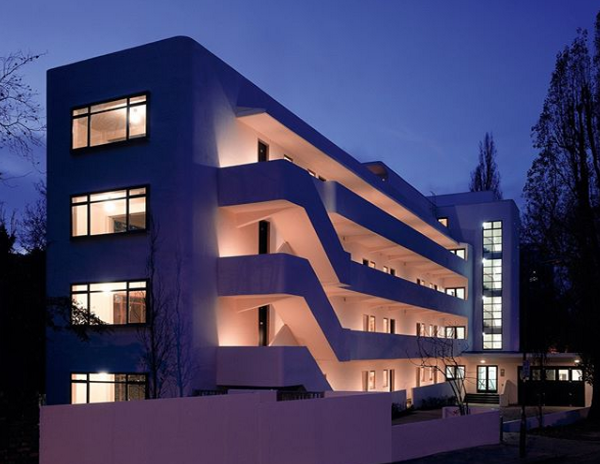 "Without Bauhaus, the Isokon would have never come into being" — Bastforbooks via Instagram

A former inhabitant of the Isokon tells me that for the Pritchards, the outer appearance of the building was secondary. More important for them was to create a physical manifestation of their social world view. It was a vision of ideal living, which, despite all obstacles, they realized with the help of Wells Coats, an architectural novice.

Swedish design entrepreneur Magnus Englund lived in the Isokon's penthouse apartment until the beginning of the year, and is a fan of "modern living." Fascinated by the story of the Isokon and its inhabitants, he created a small museum within the iconic building's former garage and just published a book entitled Isokon and the Bauhaus in Britain, the first of its kind on the topic.

"Without Bauhaus, the Isokon would have never come into being," says Englund during his tour of the Isokon Gallery, full of furniture and photos of the building's famous inhabitants. The progressive builders Jack Pritchard and his wife, Molly, a psychotherapist and feminist, were inspired by Walter Gropius' concept of minimal apartments in their search to create a "fair" way of living for all.

Ahead of their time

Gropius' concept (shared by Le Corbusier and other proponents of "modern living") of a standardized, functional studio apartment that included a built-in kitchen as well as furniture designed by him and produced industrially, seemed to be an exemplary idea to the socio-romantically inclined Pritchard. An idea that, at all costs, ought to be imported to backwards Great Britain, which was at the time still stuck in the pre-war era. The cost of living had, after all, become prohibitively expensive for many layers of society due to a global financial crisis, migration and a lack of affordable housing.

It is fascinating to discover in Englund's book just how far ahead of their time the Pritchards really were. Just like nowadays, many people had to spend up to 50% of their income on renting apartments in large cities.

This is a problem that Englund is only too familiar with. It was with a heavy heart that he and his wife had to move out of their 65-square-meter penthouse apartment, the Pritchards' former residence, when it was sold for approximately 1 million euros. Quite a hefty price tag for an apartment if you consider that this building and its apartments were not built for the affluent middle classes but for single, employed commuters and precarious artists.

The cost of living had become prohibitively expensive.

For a while the building became home to homeless and mentally ill people. That was long after the Pritchards sold it, and the Borough of Camden — after years of neglect — let the architectural icon fall into disrepair. But this state of affairs came to an end to 19 years ago, when conservationists successfully took it upon themselves to have the Isokon listed as a "Grade I" building, a status also enjoyed by Windsor Castle.

The ambitious "modern living" project was most successful in the 1930s and 40s. Back then, a single, working man or woman paid no more than 170 pounds per year, the equivalent of 800 euros in rent per month nowadays, for a fully-furnished studio apartment of 25 square meters.

But the rent also included having your windows and shoes cleaned, your laundry washed and food cooked for you — an "all-inclusive" offer, if you will. These basic tasks, which, according to Molly Pritchard were mere nuisances to a free and independent life, were performed by a housekeeping and caretaker service.

It is therefore not surprising to discover that women were especially keen on living at the Isokon. One of them was Ise Gropius, the fourth wife of Bauhaus founder Walter Gropius. On Pritchard's invitation, she had moved to London together with her husband after the Nazis closed down their Bauhaus. Starting in 1934, Ise and Walter Gropius lived in #15, one of a number of 45-square-meter one-bedroom flats, more or less rent-free.

But Walter Gropius, who had a well-paid professorship in Dessau prior to moving to Great Britain, must not have felt quite at home in what was an unusually small apartment for him. He was used to 130 square meters in Berlin. Gropius also kept his distance from the Isokon's other occupants, many of them Jewish refugees from Germany, some of whom, as it turned out, were also Russian spies.

The entertaining intellectual life of the inhabitants took place at the "Isobar," the Isokon's ground-floor restaurant, which was also accessible to the general public and was renowned for its exotic dishes and excellent cocktails. Instead of taking part in the drink-heavy social life of the Isokon, Gropius preferred to find more work together with his Bauhaus colleagues and fellow German refugees and Isokon inhabitants László Moholy-Nagy and Marcel Breuer, who had moved into the famous building on his request. 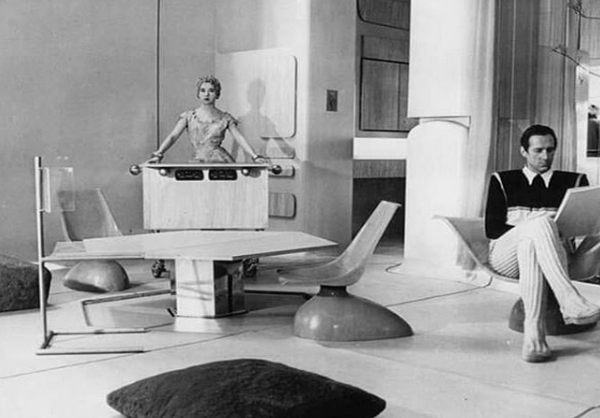 Moholy-Nagy and Breuer were able to resume their successful careers and started to design furniture, complete interior design solutions, films and commercial advertisement art — all influenced by the typical Bauhaus style. Breuer, for example, furnished all of the Isokon apartments with plywood recliners designed by him and Moholy-Nagy. Gropius, however, was unable to continue with his once successful career. "Maybe this was due to prejudices against Germans that are still alive nowadays," says Englund.

Thanks to the Pritchards' extensive network, Gropius was involved in several construction projects throughout England, but there was only one building that he was exclusively responsible for as a designer: a glamorous, flat-roofed villa with the typical Bauhaus rounded edges and lines and continuous window ledges enveloping the entire building, which was situated in Chelsea and commissioned by the famous film director Benn Levy and his wife, the American film diva Constance Cummings.

Nowadays, no celebrity designers and probably no Russian spies live at the Isokon any longer. The elegant penthouse apartment, from whose large terrace you can see all the way to London's city center, was bought by a single, employed man called Tom Broughton.

A glamorous, flat-roofed villa with the typical Bauhaus rounded edges.

This young eyewear entrepreneur calls himself a lover of architecture. "I'm from Camden and have always dreamed of owning an apartment in the Isokon one day," says Broughton. He proudly shows me around his bright studio apartment, which still boasts the original wood paneling and veneer floors of plywood on which Walter Gropius and his colleagues used to walk.

It does not bother Broughton very much that he had to part with most of his possessions since there is not much space in the apartment. "You're just happy to be able to live here," he says.

Back To Beans? A Whiff Of Britain's Post-Brexit Food Menu

A messy withdrawal from the EU could cost the U.K. its current trade routes and threaten supplies...