CAIRO — I better understood the tendency of the Egyptian state and security agencies to protect themselves after a few hours at the Stasi Museum in Berlin.

It was there in the grim, soviet-style offices of the Stasi — the former East German Ministry for State Security — that I remembered another office in which I was humiliated 25 years ago.

The managing editor of the state-owned news agency was sitting in a clichéd three-piece grey suit and a dark red tie behind a huge clean desk. He grew visibly annoyed as he looked at me. Instead of the customary, "Sit down, please," he said, coldly, "Is this the way you behave in your father's presence?"

I was surprised and wondered what he meant. Seeing my confusion, the editor bellowed, "Take your hands out of your pockets! And go get yourself a decent hair cut that is suitable for our respectable organization." I moved from shock to incredulity and resisted laughing or exploding in his face. What stood between us was not just his unchecked authority over a young trainee reporter who could be sacked at will, but perhaps more importantly, an unbridgeable gap in world view.

What is left of this incident almost 25 years later is the question of why (or, better, how) simple gestures of difference (most men wore their hair short in Egypt then) constitute such an offense to such a man. He looked visibly angry. Why did he, and many men like him in positions of power, feel perplexed and undermined by others — usually younger women and men — who handle their bodies in a different way or write in an uncommon fashion. What makes this an insult, or even a personal assault or threat to state security, leading to harsh reactions and institutionalized restrictions on freedom of expression?

Putting one's hands in one's pockets in front of a superior could demonstrate a level of relaxation and lack of fear that is unacceptable in a hierarchical society, while wearing one's hair long might be seen by some as an emasculating act. This might account for my former editor's remarks, but why the level of visible anger?

The Stasi had a special department to work on behavior, sports, arts and culture. According to historians, East German security officials believed their country was always under threat from external enemies, and that such enemies used tools like "critical opinions, unconventional lifestyles, and oppositional conduct" against the state. It was the job of Stasi officials to find these elements and render them harmless. A law school study guide written by one Stasi officer, dubbed "Securing youth policies," summed up the threat: "Raucous behavior, modern haircuts and clothing … trashy literature … heavy metal rock bands … independently producing hostile and negative views, for example in the form of political sketches, songs, slogans and chants."

For those following Egypt over the past 20 years, and the period after January 25, 2011 in particular, similar "threats" are pursued here and their perpetrators sanctioned by the police and prosecutors. The Stasi and Egyptian security agencies seemed to fear the same season: Spring. For the Stasi it was the 1968 Spring of Prague that they feared could spread to the German Democratic Republic. For them, this meant the "enemy was lurking everywhere," and placed a heavy burden on resources. After all, it's difficult to watch all of these young people who might be cutting their hair short, or dying it pink, or singing heavy rock, or using profane language. From about 2,700 "society watchers" in the late 1950s, the number approached 100,000 by 1989 when the state collapsed. 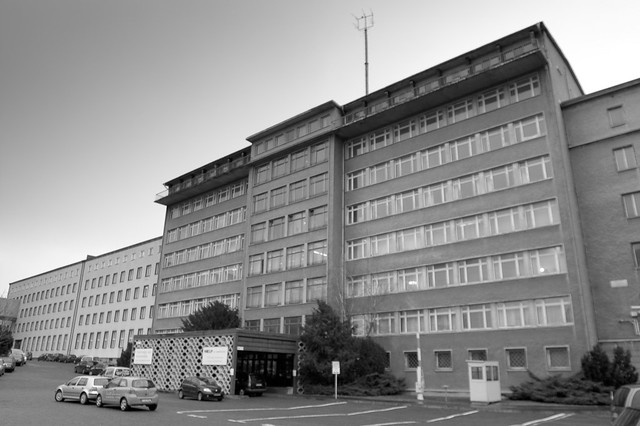 In the five years following the upheavals of 2011, Egypt has legally harassed, arrested, or sentenced to harsh prison terms, numerous writers, bloggers, social media personalities, journalists, members of religious and sexual minorities, and many others who have expressed a different view to the dominant (but fast eroding, if not collapsing) social, political, religious and patriarchal frameworks and interests of the state. This repressive attitude, defended by the police, media, judiciary and religious institutions, is becoming increasingly harsh and violent, at the same time that the nation's moral and value systems are changing.

The state bureaucracy, particularly security agencies and other institutions like state-owned media, Al-Azhar and the Coptic church, all deploy a variety of tools to control public space, as well as what is said, worn and exhibited, with a view to defending a conservative and patriarchal code of conduct, which is being challenged by an increasing number of people in Egypt today, particularly younger generations.

Several recent cases evidence the state's futile attempts to control freedom of expression in Egypt: Novelist Ahmed Naji was sentenced in early 2016 to two years in prison for "undermining public morality," after he published a chapter of his novel in a weekly literary magazine.

Amr Nohan, who was serving compulsory military service, was sentenced in late 2015 to three years in jail by a military court for superimposing Mickey Mouse ears on the image of Egyptian President Abdel Fattah al-Sisi. Nohan was charged with attempting to overthrow the government.

Four Christian teenagers received prison sentences in February 2016 for producing a 32-second video mocking ISIS, the terror group known as the Islamic State, showing members praying and taking one of the group hostage and cutting his throat. They later fled the country and are seeking asylum in Europe.

Egyptian law contains no articles requiring young men to trim their hair to a particular length, or a specific way academics should talk about Islam, or stipulations about prohibited body language, yet Egypt's Penal Code provides judges with a number of ambiguous articles that can be interpreted to incriminate and punish "violators" for undermining "public morality," tarnishing the nation's reputation, or defaming monotheistic religions.

The teenagers, for example, were convicted under Article 98(f) of the Egyptian Penal Code, which forbids "ridiculing, or insulting heavenly religions or inciting sectarian strife." The law does not specify what constitutes an "insult," or amounts to "inciting," leaving it almost fully to the judge's discretion and, hence, the influence of dominant societal constructs and ideas. This has resulted in a situation in which the Egyptian state is battling ISIS with global support, but its judiciary also jails people who mock the ISIS.

But it isn't just draconian laws and cultural norms that are responsible for this crackdown. Other disciplinarians — editors, police officers, judges, right wing demagogue television anchors who call for "liquidating" Islamists without trial — seek constant affirmation through banishing and punishing the "other," whose mere presence constitutes a direct challenge or threat.

This logic appears to adopt the following reasoning: We will fight ISIS, but we will also defend a conservative version of Islam, which cannot be criticized in public, especially if this criticism comes from a member of a minority group.

The strict observance of a public code of conduct, speech, dress, and so on, helps people justify the erosion of this code in private encounters. This fluid separation of the public and the private isn't just hypocritical, but permits an element of control amid the perceived "loss" of religion, patriarchal control and national pride. And so, the"id" — the Freudian concept that groups all primitive and instinctive parts of the personality, such as sex drive — can be let loose in private, while a mercurial superego, rooted in an imagined political and cultural past, can reign supreme in public.

Over decades of cultural and political stagnation in Egypt, the national psyche has been torn between claims of grandeur, usually rooted in a distant past, by the nationalist state and/or Islamist movements, and a reality of accumulating failure on the other. Old norms and traditions, especially those related to politics, religion and sexuality, have become extremely contentious.

Fethi Benslama, a renowned French Tunisian psychoanalyst, argues that many Arab Muslim communities have embraced a collective belief in an unblemished origin to which they can return if they observe Islam correctly, as a way of coping with the violent disruption by colonial powers, and later, at the hands of collaborating elites. Dislocated, these Muslim Arab selves, Benslama claims, have become desperate and willing to submit to any form of comfort, bent on blaming others, preferably minorities or foreigners, for their predicament.

Life was difficult enough for refugees even before the coronavirus outbreak. But with the lockdown depriving them of even meager earnings, the situation has beyond dire.