Testimony from Afghan and Somali migrants, as well as locals on Greek island of Lesbos, where Europe's largest migrant camp has burned to the ground, leaving 13,000 migrants without shelter.

LESBOS — "We are not animals," shouts a boy, as a policeman orders him to step back. Nearby a group of men pull a cart loaded with suitcases, and a little girl who had fallen asleep on the pile of bags. They have been on the road for three days and ask the officer where they should go. "We are hungry," says one in English. "Let us at least go to the village to buy some milk for our children. People may start dying here."

Thousands of people are huddled along the road that connects the city of Mytilene, on the island of Lesbos, with Moria, the largest refugee camp in Europe, which was destroyed by a fire during the night between Sep. 8 and 9. Police in riot gear prevent refugees from reaching the city, and have even fired tear gas at the refugees. A column of black smoke from a second fire continues to rise from what remains of Moria, and for hours a fire brigade helicopter flies low over the heads of the displaced. The late summer days are windy and weighed down by a sultry heat.

What remains of the slum and the detention center built in 2015 is a pile of ash, charred olive trees, the skeletons of tents and an acrid smell of coal and diesel. Inside the detention center, the heat bent the iron structures and deformed its metal sheets. It's the landscape of a bomb-out city. The day after the fire, the refugees returned in small groups to see what remained of what had been their home for months or even years. Some have tried to recover some personal items saved from the flames: gas cylinders, water bottles.

What will become of us?

Others just came to see what remains of the Moria camp, the slum-fort, a symbol of the tightening of European immigration policies since 2015. Hassan Mohammed wrapped a handkerchief around his head and mouth to protect himself from the sun and the coronavirus. "What will become of us?" he asks with a disoriented gaze, staring before the destroyed camp.

Even before the fire, Moria was certainly not a beautiful place: the shacks of the so-called olive grove had no access to running water or electricity and were surrounded by garbage. The tents, many of them handcrafted, were unsafe and inadequate, but now the situation is even more serious and the prospects uncertain. 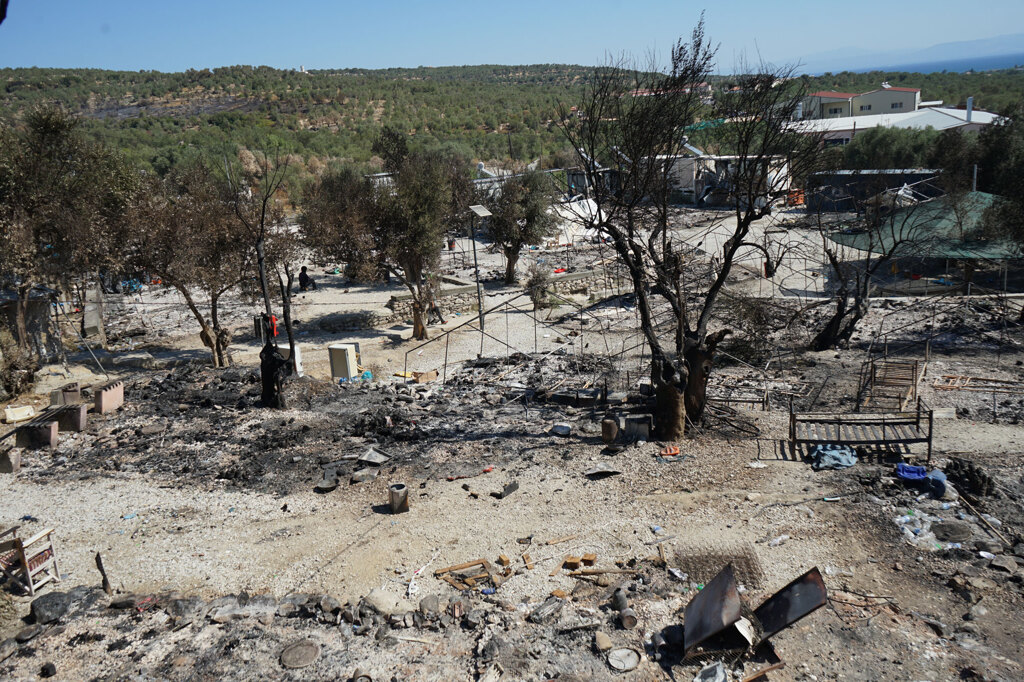 A Somalia native, Mohammed lost his documents in the fire and fears that the asylum process may become even more complicated. For the past two days, he hasn't eaten, and was forced to sleep in a scrub field. "Volunteers distributed meals at first, but now no one has come for two days and we are hungry," he says. His concerns are also linked to the coronavirus because some Somali boys he shared his tent with tested positive for COVID-19. "They had no symptoms," he says.

Mohammed says that it was precisely the tensions linked with the health situation that triggered panic among the inhabitants of Moria, and may have led to the fire. In recent weeks, at least 35 people had tested positive for COVID-19 and had been put in quarantine, although the entire refugee camp had already been under lockdown for 179 days.

According to the Greek government, some residents allegedly started the fire to protest the situation in the camp during the very long lockdown. Government spokesman Stelios Petsas announced that the displaced people of Moria will not be transferred to the mainland, accusing them of having caused the fire: "Some people do not respect the country that is hosting them, it seems that they do not want to get a passport, nor a better life," he said.

The day before, some 400 unaccompanied minors were transferred to the mainland, but the government announced that all other displaced people will remain on the island, despite the camp being destroyed. They will be temporarily housed aboard three ships: two military vessels and a ferry that have yet to reach Lesbos.

The fear that the refugee camp will be rebuilt has also fueled the protests of the inhabitants of Lesbos. On September 10, they blocked all roads to access the center of the village of Moria. As they did last February, they used trucks, cars, rocks to block traffic and prevent government and non-government vehicles from reaching the refugees sleeping on the road and the destroyed detention center.

It's all been on our shoulders.

"We do not want the camp to be rebuilt," says Lefterios, one of the demonstrators at the checkpoint set up on the road that connects the town of Moria to the refugee camp. "In the last five years it has been all on our shoulders — now the time has come to evacuate the island."

Since January, a new law in Greece makes it even more difficult to obtain asylum, and the government led by Kyriakos Mitsotakis suspended transfers of asylum seekers from Greek islands to the mainland and revealed plans to build more refugee camps, making the situation even more unsustainable.

The Moria refugee camp was built in 2015 at the behest of the European Union as part of the European Agenda on Migration, which established that people arriving from Turkey by sea would remain here to only for a few days, to be identified before being brought to the mainland and relocated to other EU countries. In 2017, however, the resettlement program from Greece and Italy was suspended and the Greek islands were transformed into open-air prisons. Moria had ballooned to 13,000 people — six times more than its capacity. The pandemic merely revealed a situation that the indifference of European authorities had already brought to breaking point.

French President Emmanuel Macron and German Chancellor Angela Merkel pledged to welcome some 400 unaccompanied minors from the Greek islands. Protests have flared up across Europe to demand that the European Union help all the asylum seekers in Lesbos. However, concrete answers are slow to arrive and some fear that the transfer to the ships made available by the Greek government could fuel further protests and tensions.

Zainab Naderi, a 19-year-old Afghan, is preparing to spend her third consecutive night on the road. "We have lost hope," she says. Naderi has had a prosthetic leg since she was a child and can no longer sleep on the floor. She holds up her leg as an accusation against the authorities, who no longer care even for the most vulnerable. Next to her, sitting under an olive tree, there is another young woman with her four-year-old son. The child is lying silent and exhausted on a blanket, as the mother says softly: "He hasn't eaten in two days."

The easternmost island of the Dodecanese archipelago is just a stone's throw from the coast of Tu...

Greece And The Dark Forces Of Modern Mobility

The word krisis was coined by the Greeks three millennia ago, meaning "turning point in a ...