After Mayor Is Arrested, Italy's "Refugee Town" Fights Back

RIACE — On October 14, 2016, Riace Mayor Domenico "Mimmo" Lucano took to the stage at the Rendano theater in the city of Cosenza. He was there to accept a prize from a local foundation, awarded for his policy of welcoming migrants and refugees to revitalize his small southern Italian town.

Thrilled by the size of the crowd that had gathered to hear him speak, Lucano thanked those in attendance for recognizing his work. "I don't know if I deserve it," he said. "Maybe, one of these days, they'll arrest me."

At 6:30 a.m. on October 2, 2018, five officers of the Italian Finance Police knocked on the mayor's door at his home next to the town hall, waking him up. Lucano opened the door in his pajamas.

He explained to the officers that he'd already clarified everything, and testified voluntarily. "I don't understand what you're doing," he told them.

At a time of rising xenophobia in Italy and throughout Europe, Lucano's efforts are a marked contrast to the anti-immigrant policies of his fierce critic, Italian Interior Minister Matteo Salvini. After Lucano's arrest, Salvini urged a deeper examination of the mayor's practices.

The previous investigation into his pro-refugee policies had lasted 18 months and resulted in Lucano being placed under house arrest. The public response from his supporters was swift: thousands of people took to the streets of Riace in a show of solidarity with the mayor.

The protest was attended by many locals as well as prominent Italian politicians, but Lucano's fiercest defenders are the very people he helped to remain in a country that wanted to expel them. Saibou Sabitiou, a 44-year-old immigrant from Togo, was in tears the day after Lucano's arrest.

"It's an injustice," said Sabitiou. "Targeting him doesn't make sense. We will never abandon him."

I owe everything to him.

Sabitiou used to work in the agricultural fields around the nearby town of Rosarno, notorious for their awful working conditions and violent acts of racism. "It was 2010, and I was riding home on my bicycle when I was shot at from a passing car," he said. "I spent 15 days in the hospital. It was a racist attack."

He showed a photograph of himself smiling beside Giorgio Napolitano, after the then Italian president of the Republic came to visit him in the hospital. "Then Mimmo came to see me, and he brought me to Riace," said Sabitiou, referring to Lucano. "I owe everything to him, my job and my right to live in peace. I was so happy here, it's not fair."

There are 430 refugees in Riace, making up just under one-quarter of the residents. Initially, they didn't understand why television crews kept showing up in this small town of 1,900. Eventually, they understood they were there to ask about the mayor.

"He's a very kind man, he's like a father to us," said Favour Owunso, a 26-year-old from Ghana. "He always gave us something to eat. He would take money from his own pocket to give to us. He never did anything wrong."

During the protest, Lucano opened the window on the second floor of his home to greet the crowd and raise his fist in defiance. He and his family maintain that he has done nothing wrong: While he technically broke the law, Lucano claims he never profited from his policies and that he was unaware they were illegal at the time. 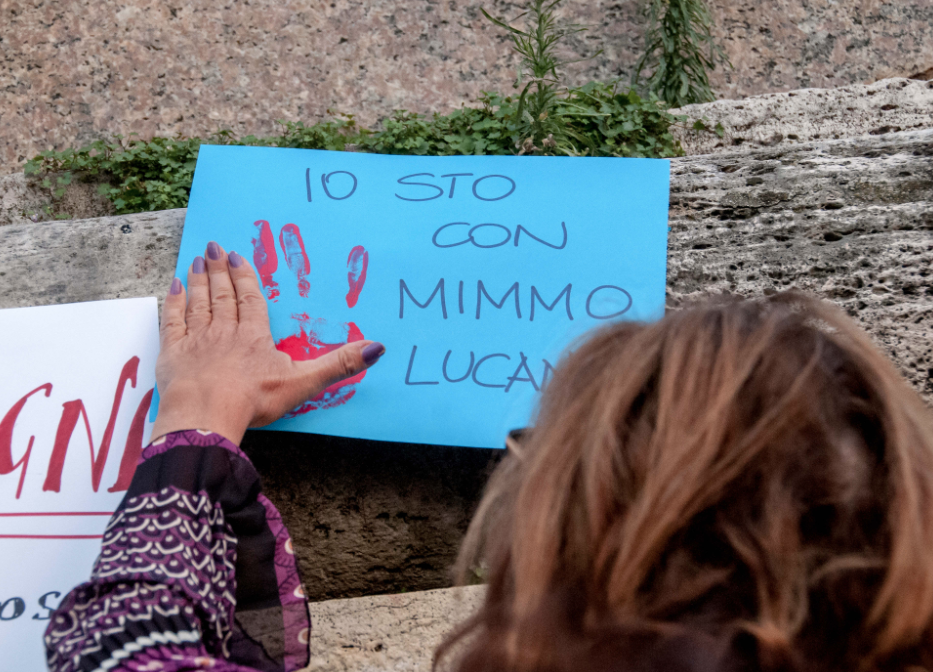 "My brother always said that you must do what is right," said the mayor's brother, Giuseppe Lucano. "The law is not human."

The police investigated his finances for evidence of graft, but all they found were irregularities in a contract for waste management services. The judge overseeing the case upheld the allegations of widespread malpractice in the mayor's office — but he also issued a scathing critique of the police investigation, calling it vague and riddled with errors. One of the major pitfalls the judge found was that the mayor was interrogated by officers in the absence of his lawyer.

What the police did find lies at the heart of Lucano's model of integration: a manipulation of existing laws to allow migrants to legally live and work in Riace. In one case, the mayor engineered a wedding to grant Italian citizenship to an Ethiopian woman. He even created a parallel currency for migrants, which they could use to access local services when the government failed to provide their allowance on time.

Lucano is a 66-year-old divorced father of three children. Before entering politics, he was a chemistry teacher, working at schools in small towns throughout Italy. He's always admired far-left revolutionaries, from Che Guevara to anti-Mafia activist Giuseppe Impastato. A mural in the center of town bears the words of the Mexican rebel leader Emiliano Zapata: "If there is no justice for the people, let there be no peace for the government."

Lucano was first elected mayor of Riace in 2003, and was re-elected three times. He had first gotten involved in local politics in 1998 when 300 Kurdish refugees landed on the shores of the nearby Ionian coast.

This is a region where two opposing worlds can coexist.

"Mimmo thought that welcoming them would have been good for everyone," recalled Giuseppe Lucano. "Good for them because they were homeless, and good for the town because it was de-populating."

The arrival of the Kurdish refugees marked the birth of the "Riace model", which attracted attention from around the world. The legal pushback began two years ago, when he was summoned by the Italian interior ministry for an investigation into alleged irregularities in his management of the town's funds. When the ministry proceeded to block the funds, Lucano went on a hunger strike.

At the Meeting Cafe in central Riace, local opinion is split. "If he made a mistake, he should pay," says one. "Why should we feel bad for him? It's not our fault if they caught him," says another.

Riace lies in Locride, an area that forms the toe of Italy's boot in the southern region of Calabria. This is a hardscrabble land of mountaintop hamlets, where the mob continues to dominate and street signs are pockmarked with bullet holes. This is a region where two opposing worlds — the Riace model and the ‘Ndrangheta organized crime syndicate — can somehow coexist.

As rain poured down on Riace, three German tourists from Dresden roamed the town's narrow streets. "We came because we saw a TV program about the town of refugees," they said. Lucano may be under arrest, but his Riace model is alive and well.

MILAN — There were a few moments of silence when I told my girlfriend what I'd done. I'd ...

ROME — The 70-something barista who served me an iced tea last July was proud of his ...