Why COP21 Climate Change Pact Alone Can't Save The Amazon

Bathing in the Amazon - El Tiempo/GDA/ZUMA

Deforestation is one of the primary causes of global warming, and much of it has happened across vast areas of the Amazon rain forest. Will pledges at the climate change conference in Paris really count?

BOGOTÁ — Like so many countries, Colombia pledged to fight climate change at the global COP21 environmental summit in Paris last month. Naturally, the first step in that direction must be to curb its own alarming rates of deforestation. More than 140,000 hectares of rainforest and woodlands were destroyed in Colombia in 2014, 16% more than in 2013. If the Colombian government wants to fulfill its environmental pledges, it must act now to stop this destruction.

Brazil's Antonio Nobre, a leading expert on the Amazon, compiled a report In November 2014 of the 200 most important studies of that vast forest to remind people of its importance to human beings. He called for a "war effort" to save the forest and collaboration "like the allies united in World War II."

He argued that masses of twigs and branches are key to maintaining the balance of the world's climate. To clarify, he offered an example: Each large tree whose branches and foliage are about 20 meters in diameter pump 1,000 liters of vapor into the air. Because the Amazon has about 600,000 million trees, that means the release of 20 billion tons of water every day.

That's why Nobre is so concerned about the frantic rate at which the great forest is being devoured. In the last 40 years, a total forest surface twice the size of Germany has been cut down in the Amazon. Colombia has been at the forefront of these chilling figures.

About 45% of deforestation in Colombia in 2014 was in its Amazonian regions, with more than 63,200 hectares cut here by means ranging from machetes and axes to heavy machinery. In its Andean regions, 33,600 hectares of forests were cut down in 2014.

Deforestation, of course, is among the causes of global warming. As the Wildlife Conservation Society's Cristián Samper says, cutting trees constitutes 15% of greenhouse emissions worldwide. About the same as the transport sector and all its fumes!

This alone is reason enough for the country to start thinking differently about the environment. So far authorities have practically ignored the elevated figures concerning illegal tree cutting, and disregarded its consequences.

But there is reason for hope. The Paris climate deal shows Colombia a new direction, and Norway, Germany and the United Kingdom have offered $100 million if it can reduce the deforestation rate in the Amazon to zero within five years. That opens doors to more serious commitments. 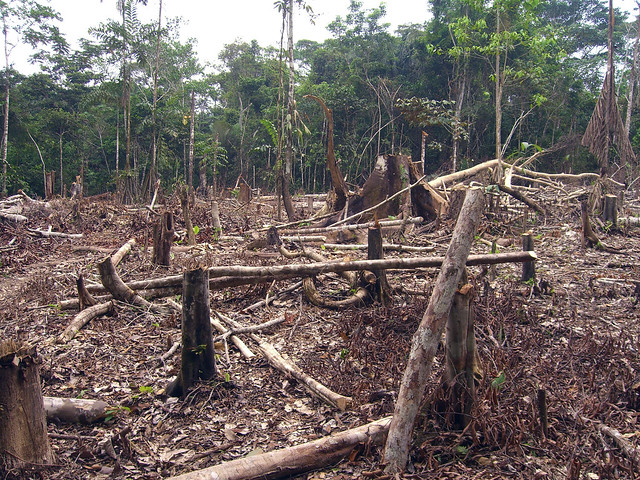 The task isn't easy, nor is the broader pledge to reduce greenhouse gas emissions 20% by 2030. But if we want to do our bit to prevent temperatures rising beyond 2° Celsius, our first objective must be to stop the destruction of our forests.

While activists like Samper or former Environment Minister Manuel Rodríguez have urged a national front to ensure the country meets its climate pledges, the proliferation of calls is inevitably showing the discrepancy between words and deeds. Among them, Rodríguez says, is that the government is simultaneously promising to fight pollution and promoting mining activity in several areas of Colombia — including in Amazonas.

He says it's nonsensical for Colombian officials to boast in Paris about leading the fight against global warming while at the same time loosening environmental laws inside the country. Another example is the so-called "fast licences" law designed to ease the process for big mining and oil projects. And while several states are contemplating ways of supplanting coal, Colombian policies seem to be boosting its search and extraction.

The country needs to rethink these paradoxes if it wishes to adapt itself to the inevitable. This year could be the last opportunity. The alarm bells began ringing a while back, and became louder last year. About 80% of our territory is in a state of red alert for forest fires. The Magdalena and Cauca rivers, Colombia's two principal water channels, have reached critically low levels. In fact, the Magdalena has not had this little water for four decades.

It seems that the more apocalyptic the predictions become, the less people are able to gauge in their minds the scope and consequences of climate change. In its real, unexaggerated dimensions, protecting the environment must become the central factor in shaping the government's developmental roadmap. Now is the time to take the first step.

Bezos, Branson, Musk. The billionaires throwing untold resources into private space travel may prove, in the end, to be visionaries. But they're also blind, it would seem, to real-world problems here on planet Earth.

Colombia, not the United States, has been the chief victim of drug trafficking and failed anti-narcotics policies. It has a right, if not a duty, to seek other ways of curbing a chain of actions that have corrupted its society.