Built on a soggy bed of sand, the German capital isn't an ideal place for underground infrastructure. And yet, there's a relatively unknown maze of tunnels, bunkers and other surprising spaces down there.

BERLIN — Schloßstraße, a busy shopping street in the west of Berlin, has all the big city essentials: shops, restaurants, cinemas and a theater. And yet, for a brief period of time, things were even busier under the Schloßstraße.

Back in 2012, over the course of several months, bank robbers dug a 45-meter long tunnel there. They drilled their way through from an underground parking lot and at night, under the cover of darkness, removed tons of sand. Finally, in January 2013, they reached the vault of a nearby Volksbank and emptied all the deposit boxes. They disappeared using the same tunnel through which they arrived, and to this day, they've never been seen or heard from again.

Nowadays, only the entrance to the tunnel remains: a wooden frame, neatly screwed together. And it's open to public ... sort of. The entrance isn't in its original location. It's in a museum rather — in a winding old bunker, also deep underground.

This world of subterranean burrows and bunkers is all the more surprising given that the city is built on sand.

In Berlin there are interesting sights at every corner, which is why millions of tourists come here every year. Less known to most is how many places of interest there are below the city: sewers and tunnels, operating theaters from the war, the vault of the Berlin sewer system, even safe rooms that became night clubs.

Germany's first subway tunnel was excavated here at the end of the 19th century, modeled on the London Tube. There's also the last bunker of its kind, built in the event of a nuclear war — with kitchens, protective equipment, and densely packed bunk beds and special locks, so that the 3,000 people it was meant to accommodate wouldn't overrun each other. And yes, there's also what's left of the bank-robber tunnel, which the police gave to the museum.

This world of subterranean burrows and bunkers is all the more surprising given that the city is built on sand — a particularly humid variety of sand at that. Berlin owes its name, after all, to the Slavic term for "place in the swamp." These places do exist, however, and are now open to the public thanks in large part to efforts by an association called Berliner Unterwelten (Berlin's Underworlds), which has been developing underground Berlin for 20 years. As a result, visitors can now pick a place in the city every weekend, descend into the depths and see what's going on. 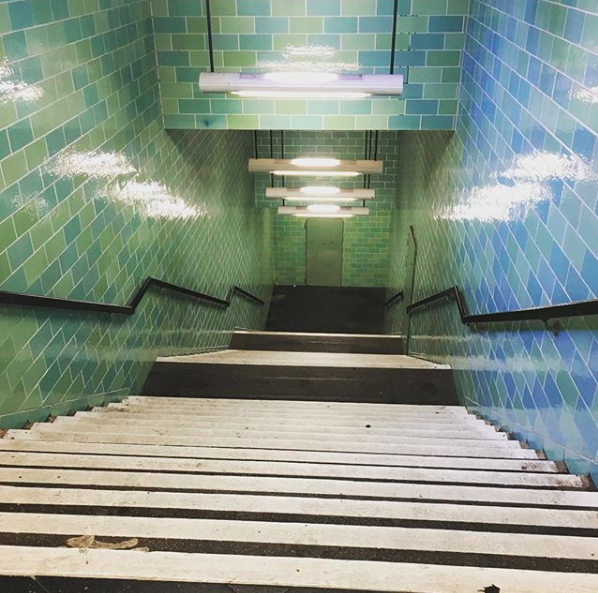 There's the bunker in Humboldthain Park, for example. Below the surface, the subway rushes past long corridors, stairways, iron doors, gates, and crossings. Dietmar Arnold, the tour guide, asks everyone to stay close behind him. The danger of getting lost in this maze is too great.

On the walls, visitors can still see the phosphorescent letters that were once attached so that people could find their way out in case of a power failure. This was one of Berlin's 1,000 war bunkers. Arnold guides us upstairs, downstairs, past old signs, emergency beds and rooms with showcases. In between, he talks about the big city under the big city.

In the past, one of the largest pneumatic tube networks in the world used to run through here, and while after World War II the city was divided into two parts above ground, the subterranean Berlin remained for many years united by the subway network or the sewerage system. After the Wall was built, many used them to flee East Germany.

Arnold stops in front of a massive manhole cover, one of the many exhibits that the association has collected over the years or received as a donation from contemporary witnesses. The lid lays in the eastern part of the city and would be lifted at night so that families could descend into the sewers. Many canals were initially only half barred, "so it was eyes and nose closed, and then through the shit to freedom," says Arnold. Afterwards, so-called "cover men" would go again to the entry point and closed the manhole cover, so as not to raise any suspicions.

Arnold points to metal racks, from which huge spikes protrude. The "Stalin lawn," he explains. This was laid out by East Germany's Communist regime in the Berlin underground shafts to prevent people from escaping. Nevertheless, many, especially border guards, managed to reach the West part like this. In other cities, the underground stands for crime and shady machinations, just think of the "Third Man" in the Vienna sewer system. But in Berlin, the underworld has always been the gateway to freedom.

The tour guide opens a door at the end of a dark corridor. Suddenly there's a crowd in front of it — we've just landed on a subway platform. After a few stops, we resurface on Bernauer Strasse and from there we enter an old brewery vault. Brick walls, stomped ground and everywhere mounds of earth and little mine cars. This part of the "Underworlds" Museum is about the work that people have done underground to enable others to escape.

Approximately 70 escape tunnels were dug under Berlin, in most cases from a cellar in the Western part of the city and then under the Berlin Wall to the Eastern part. There, also in a cellar, friends and family of the tunnel builders would wait and crawl their way to freedom, sometimes a few dozen people at a time or an entire wedding party, sometimes only a few. Several tunnel projects were betrayed or discovered, and the tunnel diggers shot by the Stasi.

Time and again, Arnold tells us, older men contact him and say that they too had built a tunnel. Many shafts are indeed still to be found. Only last year, a tunnel was uncovered during construction works. Klaus Köppen had dug it day and night together with friends, a 145-meter long tunnel, six meters below the surface, to bring his girlfriend and child to the West. Even the wood with which Köppen had supported the shaft was still intact, the beams are now leaning against the wall of the museum, directly next to a reconstructed escape tunnel.

One sees the entrance, the lighting and the pipes through which oxygen was conducted into the tunnel. Construction-wise it's similar to the tunnel the robbers dug to reach the Volksbank vault. The only difference is that for Berlin tunnel builders of that time, freedom was a more enticing prospect than personal enrichment.