"'Anti-Tourist" Turnstiles Under Fire In Venice

VENICE — Venice and its 80,000 regular inhabitants are drowning in tourists. Some 30 million flock to its famous canals every year, stressing the infrastructure. Fed up, the lagoon city's businessman-turned-mayor, Luigi Brugnaro, has a simple but controversial plan to stem the tide: turnstiles.

City authorities recently set up turnstiles on four bridges that connect the city to the mainland, restricting access to tourists. All four access points will be manned by traffic police that can deviate traffic if the flow of visitors gets too busy.

Brugnaro, an independent elected with backing from a center-right coalition, is proud of the initiative. "It's the first attempt to regulate the influx of tourists in the history of Venice," he says. "Clearly we'll make lots of mistakes and we'll have lots of critics, but so far everything is working."

And some locals support the effort. "Many tourists who come here are day-trippers. They don't spend any money and they fill the city with rubbish," says a passerby near one of the new checkpoints, on the Calatrava bridge.

But others liken the situation to Disneyland, or even Belfast during the sectarian conflict in Northern Ireland. "This is useless," says one city resident. "Venice needs more public services for its residents. We can't always think about tourists," says another.

Civil society organizations in Venice oppose the turnstiles as well. "The outgoing government gave Venice 10 million euros to regulate the influx of tourists, but this is unnecessary," says Marco Gasparinetti of the April 25th Committee, a group that organizes the festival celebrating St. Mark, the city's patron saint. "When tourists reach the city center, it's already too late. We must create a filter earlier." 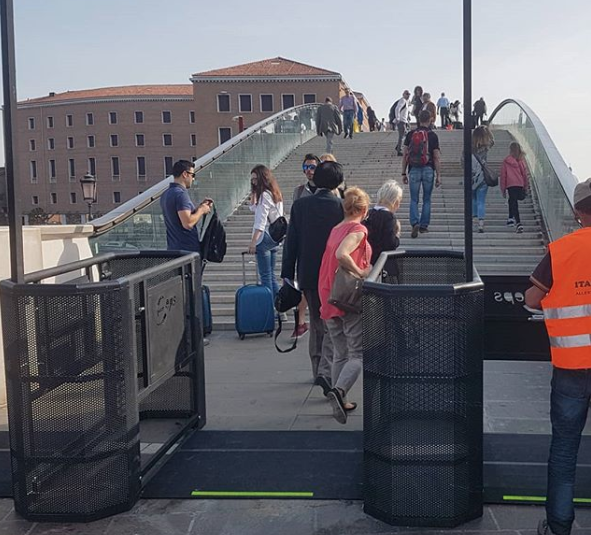 "This solution was too improvised" — Photo: Cesare Cappello via Instagram

Gasparinetti offers different solutions to the problem that would avoid the potential legal challenges to the turnstiles. "The measure to limit the circulation of tourists is unconstitutional," he says. "Let's give free access to anyone who has booked a hotel room, and block access to everyone else on days when we have to reduce influx into the city."

Other members of the committee point out that the new turnstiles bear a suspiciously close resemblance to turnstiles produced by one of the mayor's companies. While the allegations have yet to be confirmed, Brugnaro is pushing ahead nonetheless. "We didn't pay anyone for this idea," he says. "It worked when we installed turnstiles on the piers for the water bus, so maybe it'll work here too."

Resentment towards the tens of millions of tourists is growing, and the issue has become a hot topic in local politics. Only a third of visitors stay overnight, and many don't spend any money in the city.

"We're staying in Mestre. Venice is beautiful but it's too expensive," says a Polish woman sharing a pizza with her friend at the bus station. "It's normal to expect so many tourists to come to somewhere so beautiful."

Their concerns were shared by other visitors to the city like Riccardo and Francesca, two university students from Palermo. "We can only stay one day. We're scared of the prices, not the tourists."

Some visitors refuse to be deterred by the turnstiles or the high prices. "Venice is always beautiful. It's impossible to stop tourists from coming," says a British couple returning for the first time since their honeymoon. "It's magical in November when no one else is here."

Local shopkeepers have railed against the turnstiles for drawing customers away from their streets. "This solution was too improvised," says Claudio Scarpa, director of the Venice hoteliers association. "But the problem does need to be addressed."