The Openly Gay Priest Shaking Up The Catholic Church In Germany

Holger Allmenroeder is a Catholic priest who is also openly gay. He supports gay and lesbian people, divorcees and those who have remarried. Traditionalists may find him alienating but his masses are well attended. Is he the future of the Church?

MAINZ — Catholic priest Holger Allmenroeder's short hair and friendly smile fit the part. Yet when leading Mass, he often wears a rainbow stole over his white robe — a symbol of the LGBTQ movement.

Allmenroeder, 58, is a Roman Catholic priest responsible for two parishes in the diocese of Mainz in western Germany. He leads Mass, officiates at weddings and funerals, and visits the elderly and the sick. And he is openly gay. He's known about his sexuality since he was a teenager. That's why he speaks up for those who are often shut out of the Catholic Church: gay and lesbian people, trans people, remarried divorcees. His Masses are always well attended, with parking spaces near the church hard to find on Sundays — even during the pandemic.

Are people like Allmenroeder the future of the Church? Or are they destined to lose in clashes with an institution that is built on centuries of dogma?

On ringing the rectory doorbell, we are greeted by a barefoot man in bright clothes. He leads us into a room with a well-stocked bookcase and a cross hanging on the white walls. "Faith is an exclusive club that only allows certain chosen people in," says Allmenroeder — and the Church needs to finally recognize that.

He says gay and trans people often believe in God, but find themselves shut out from the Church. Recently, the debate about homosexuality in the Church was reignited when priests in a number of German parishes carried out blessings of same-sex unions. Allmenroeder was among them, blessing the unions of two couples. He says that the increased awareness was good, but he doesn't like to think of it as some form of protest. "Blessing same-sex unions should simply be normal."

Allmenroeder grew up in the nearby Ruhr region. He was baptized into the evangelical Church and found faith as a teenager, but says he always felt something was missing. He found that missing piece in the Catholic Church, where he simply felt more comfortable, so he converted after leaving school.

After a few years working as an administrative official, he decided to become a priest. He wanted to dedicate his career to his faith and work more closely with people. The prospect of celibacy didn't put him off. Because, as Allmenroeder says, priests are by no means isolated.

"Every one of us has a past, friends, parents, siblings." He believes celibacy is a "relic from the Middle Ages" but he says the requirement to remain celibate leaves a lot of room for maneuver. "Celibacy means that priests must remain unmarried." How you interpret that is down to the individual. There is no one checking up.

"When I look in the mirror, I don't want to blush."

Allmenroeder didn't see his homosexuality as a reason not to be ordained in the Catholic Church. He didn't want to hide it. From a young age he decided not to deny who he was: "When I look in the mirror, I don't want to blush." He stayed true to that, although it meant many stumbling blocks were put in his way.

When he applied to the seminary, he felt there was a lot of disapproval, especially from one particular man: "The Archbishop of Cologne at the time told me I would never be a priest. He said he would personally use his influence to stop me — simply because I was open about being gay." Instead of holding him back, Allmenroeder says these experiences have made him stronger. In 2000 he was ordained in the diocese of Mainz, and since 2004 he has worked in Seligenstadt, a small town near Frankfurt, where he is the priest of two churches — St Mary's and St Margaret's. 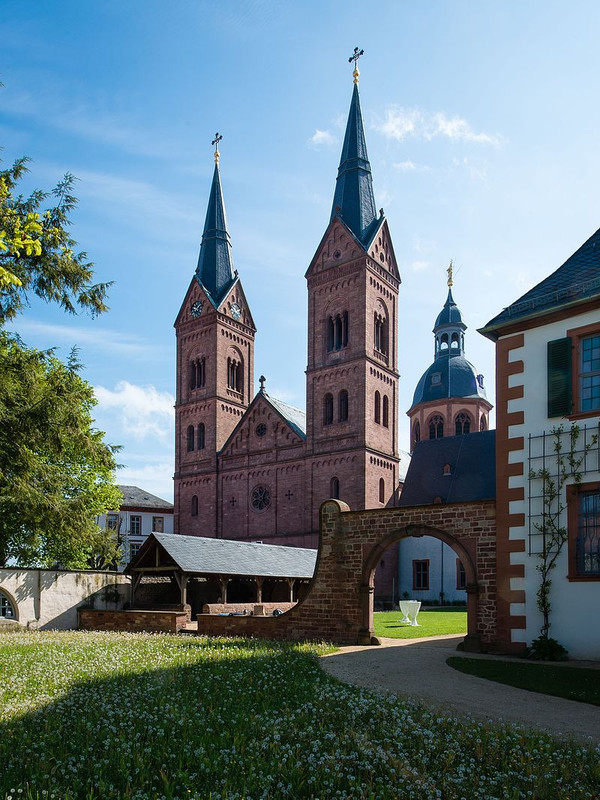 The two parishes are very different. The Masses at St Mary's take place in a concrete building from the 1970s, whereas St Margaret's is a neo-Gothic church. Many of the parishioners there place a lot of emphasis on tradition. Allmenroeder says he was warmly welcomed from the start at St Mary's, but there was a little more hesitation at St Margaret's.

Günter Laber is a member of the parochial church council at St Margaret's and he says they had a "bit of a bumpy start". "When Father Allmenroeder arrived, there was a bit of friction," he says. Allmenroeder didn't place a lot of emphasis on the veneration of saints, although that is a very important aspect of the faith for many conservative Catholics. Laber says, "Perhaps that didn't come naturally to Father Allmenroeder because he grew up in the evangelical faith."

But in the end, says Laber, it wasn't a problem. The parishioners recognized Allmenroeder's strengths – they value how involved he is with them. "When problems arise or someone is dissatisfied, they can always talk to him."

Although at first the new priest was not what they were used to, Laber says he hasn't seen parishioners drift away. "I would say the opposite is true. Over the years Father Allmenroeder has brought in lots of people who weren't so strongly rooted in our community. He's especially good with young people." In that way it seems Father Allmenroeder is bucking the trend.

More and more people are turning their backs on the Church. In 2019 alone, more than 272,000 German Catholics left the faith. Young people especially say that the Church is not authentic, that it is hypocritical and unapproachable. They are calling for a realignment, a more modern approach.

Allmenroeder doesn't want to wait any longer. He wants to see female priests ordained, and says that women who have abortions shouldn't be judged. "The fact that the Church gets involved there is simply an expression of patriarchal structures."

In his sermons Allmenroeder speaks powerfully about divorce and remarriage. He explains why it's unreasonable for divorcees to be excluded from Mass: "The person whose partner has left them is punished twice over, even if they can't do anything about it." There are some parishioners who think that he often goes too far. "That does make certain people uncomfortable," says Günter Laber, "but no one says anything about it any more. We know our priest."

Even the small rainbow flag that Allmenroeder often wears on his lapel has met with criticism. Some higher-ranking members of the clergy have tried to ban him from wearing it. But he refused to take it off.

The emphasis should be on forgiveness rather than dogma.

Allmenroeder's views run contrary to the direction where the Roman Catholic Church appears to be moving, says Detlef Pollack, Professor of the Sociology of Religion at the University of Münster. Pollack sees Allmenroeder as "a sign of a change that has been taking place on the ground for a long time. At an institutional level these reforms are still a long way off – they are coming up against dogma and traditions." Given the Catholic Church's 2,000-year tradition, "you can't expect fundamental aspects of its teaching to be overhauled in the blink of an eye. It takes time," says Pollack.

Many experts are pessimistic about the future of the Church, even Catholics. Some think it may only last another few decades. Pollack thinks this is unrealistic. "The Church won't just collapse overnight," he says. But he believes reforms are necessary. 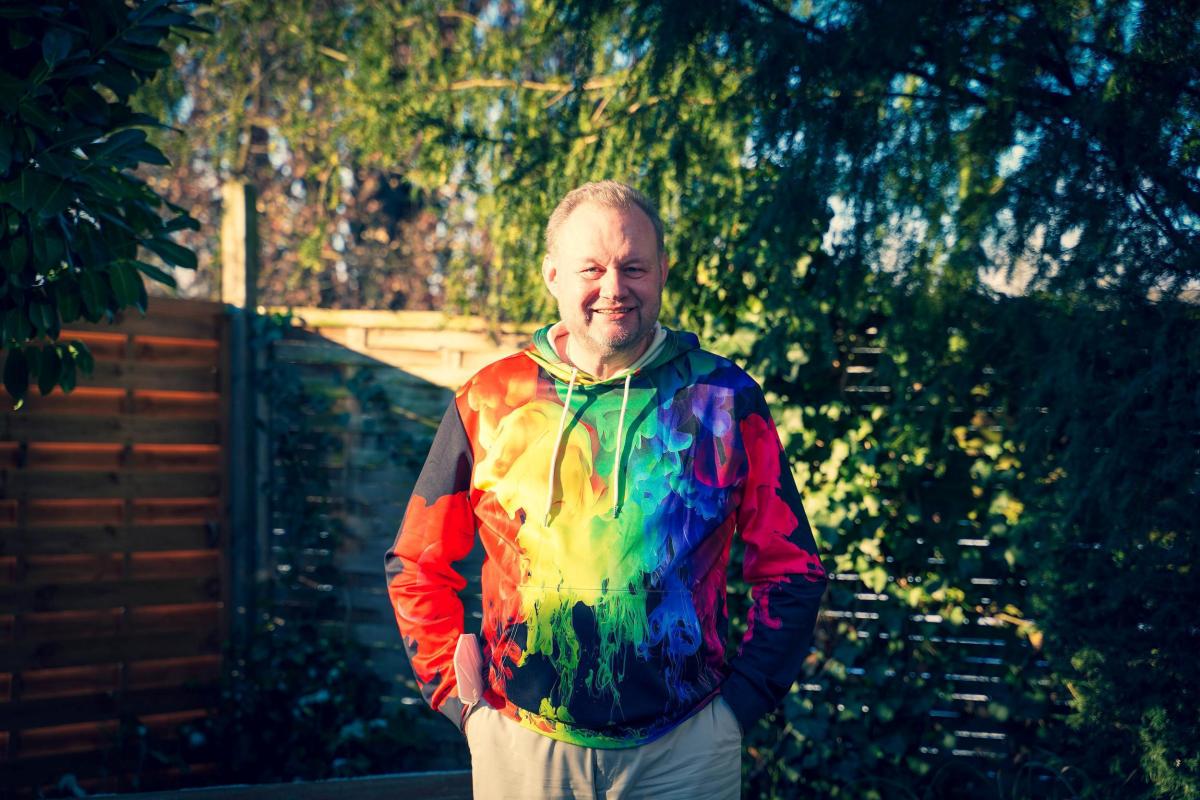 "We simply need to be more authentic – from the smallest parish right up to the Vatican." — Photo: Marlen Dannoritzer/Die Welt

One of the biggest problems is a lack of trust in the institution. Could Allmenroeder help there, in the long term? "A priest like Father Allmenroeder could well have a part to play," says Pollack. "When priests like him rebuild people's faith in the Church, the institution as a whole also benefits."

Allmenroeder says it's a question of credibility. "We simply need to be more authentic – from the smallest parish right up to the Vatican," he says. "That also means standing for equality, rather than placing clergy above the congregation."

Above all, the emphasis should be on forgiveness rather than dogma. That is the only way for the Church to remain attractive to believers. "And that," says Allmenroeder, "is important, otherwise priests will be celebrating Mass alone."