How The Digital Dating Revolution Is Changing Morocco

Social media and dating apps have revolutionized the way young people live, and given women the right to seduce.

CASABLANCA — Facebook is the only place Nadia* is allowed to go out in the evening. From her tiny, windowless bedroom, with the fan on full blast, she allows herself a breath of fresh air. Social media has revolutionized her life – that of a young bank employee who, at 23 years of age, has led an unremarkable life, suffocated by the traditions that her parents still adhere to. In the room next door, they have no idea what is happening inside Nadia's head, beneath the multicolored veil which covers her long, brown hair. It is made from "high quality silk from Saudi Arabia," boasts the pretty Moroccan with large, black eyes.

Every morning, when she walks into the bank, she puts her veil in her desk drawer. "There is a time and place for everything," she says. Nadia puts her veil back on before returning to her parents' apartment, in a working-class area of Casablanca. On the way home – on the bus, along the endless road as she walked, and in front of her apartment block – Nadia meets several people. "I didn't know if you can call that meeting people," she says. "Maybe in a one-sided way."

She counted: no less than four men approached her, saying things like "pretty gazelle," "So, tell me your WhatsApp?," or, "Where are you going dressed like that, I can't see you?" Without the veil, she would certainly have doubled that count. But Nadia ignored them one by one, keeping her head down. "In the street, it's not flirting. It's harassment."

On Facebook, on the other hand, Nadia responds to almost every approach. "Here, I'm in control." Moving her thumb across the screen of her smartphone, she scrolls through the hundreds of anonymous messages that she has received since joining in 2012. All of these people "want to talk," without ever having seen her. "Guys look for girls who live here, to sleep with them or for something more serious. With Facebook's filters, they're easy to find. Then they choose according to the photos." There's an art to it. In her photo, Nadia, her hair uncovered, is smiling and seems relaxed. "You're kidding! It took me weeks to find the perfect pose."

Following family dinner, the ritual begins. "I'm not necessarily into them, but I take pleasure in flirting for the sake of flirting." The sweet nothings exchanged are far from pious, but never really explicit. In her room, or sometimes in the middle of the lounge, Nadia flirts with danger, defying her brothers and her parents. It's exciting. She is currently "seeing" a certain Yassir. He lives in Tangier, but has promised he will visit her before the end of the year. There have also been other men, several at the same time, love stories, sexual discoveries. 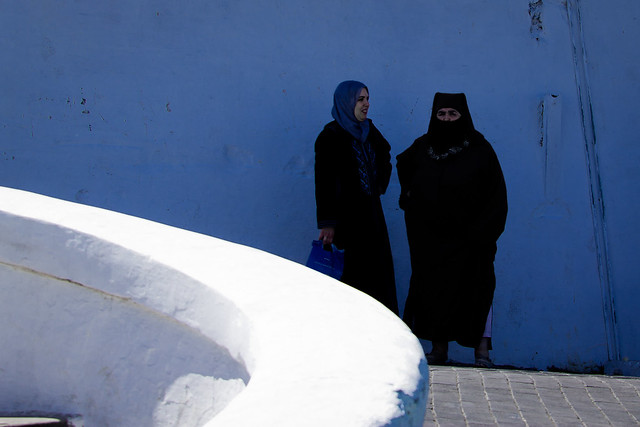 In this country, which is both attached to its eternal traditions and overtaken by its modernity, flirting 2.0 has handed unprecedented power to women. On social media, Moroccans can get to know each other without being seen. And Moroccan women have gained the ability to flirt "without being viewed as a whore." Those crude words are from Fatiha, Nadia's older sister. At 29, she already has two children and didn't have "the luxury of meeting her husband," she sighs. He was presented to her by family friends. Fatiha didn't experience the digital age – at least, not in time. It is the age of sexual liberation. Virtual, yes, and removed from reality, but a liberation all the same.

"Like Nadia, I was never allowed to go out with guys. If we spoke to them in the street, we were sure that that evening, our mother was going to shut us in the bedroom and whisper sternly that frivolous girls make the family lose its honor." Here, nothing can be hidden. "Even today, the neighbors sit by the window to spy on lovebirds and denounce them to their parents, or sometimes to the police." Morocco's penal code does not allow much freedom. According to article 490, sexual relations outside of marriage are punishable by imprisonment for one month to one year; article 489 punishes homosexuality; article 491, adultery.

Social media arrived at the same time as the Salafist influence was spreading across Morocco, further cementing the divide between conservatives and reformists. In a country where men and women are traditionally kept apart, and people are divided into social groups, the Internet has blown apart the barriers which divided public space – more than 63% of the population is online. "In the street, in cafes, restaurants, on public transport, people meet only those who come from a similar background," Nadia explains. "On Facebook, there are housewives and also business owners. Those who can't read get by using voice messages. There is a place for everybody."

For the past few years, the Tinder phenomenon has been winning over single Moroccans. In one click, hundreds of potential partners appear, filtered by location. There is no need to brave the obstacles of real life, filled with spaces which are often forbidden to women. Other dating sites, local variations of Meetic, have also appeared. The slogans range from "Man searches woman," to "Find a husband," and even "Find a rich man in Morocco". There is something for everyone.

Unlike the Western countries in which these dating sites were born, "you can't find yourselves in a bar half an hour later," says Salim, 32, a computer engineer. He has come to meet Narjisse in the upstairs room of a café, a classic date venue for couples in Casablanca. "Upstairs, we can hold hands under the table and steal hidden kisses. We could never do that on the patio!" They met a year ago during a conference weekend in Marrakech. At the beginning, WhatsApp helped them to stay in touch.

But they both live with their parents. Salim doesn't yet have the money to have his own apartment. "For a Moroccan woman, even when she has the money, it is very difficult to leave the family home before marriage," explains Narjisse, 28. In the cities, where women are increasingly active in the workforce, rising more easily to senior positions, the average age at the time of marriage has risen to 26, compared to under 20 in the 1960s.

For Salim and Narjisse, expressing their love meant making do. "We would hide in stairwells at lunch to kiss each other. There were used condoms on the floor, it wasn't very romantic," admits Salim, blushing. In the back of a car, at the theater, behind the bushes or hidden by the rocks at the beach, away from prying eyes. Neighbors, caretakers and all kinds of police informants are swift with their denunciations. "We always have fake wedding rings with us, just in case," says Salim. "We just need to both be in the car or walking down the street for a cop to stop us and ask what we are doing together."

Then came Airbnb. While hoteliers are obliged to ask to see a marriage certificate, the online platform creates opportunities to get around the law. "We go there after work, and never spend the night, so that our parents don't become suspicious. Usually, the concierge greets us." An unease descends upon the table. Salim hesitates. Finally, he says quietly, "We pay him off." The whole arrangement upsets Narjisse, whose greatest fear is being mistaken for a prostitute. The fatigue which comes from always having to be quick, to hide, to lie to her loved ones. And the fear that this relationship will not wind up the way she hopes it will. "If our families find out that we are seeing each other, it will be over."

*Names have been changed.

By distinguishing between refugees and migrants, international law underestimates the plight of p...

On The Road To Europe: Morocco Cracks Down On Migrants

Since this summer, Morocco is the theater of an unprecedented wave of arrests and forced displace...