How Egypt Fell In And Out Of Love With Uber

A taxi driver at Cairo - Gehad Hamdy/DPA via ZUMA Press

Uber launched with an excited bang in Egypt in 2014, promising work and new income for a country struggling with unemployment. But the castle of sand has disintegrated, leaving a trail of debt and frustration.

CAIRO — One of Uber's earlier television ads in Egypt starts with a young woman getting into a car. Looking at the man in the driver's seat, she recognizes him — he is the famous footballer Hazem Emam. She is thrilled to see her favorite player. They strike up a conversation and talk for the whole ride, which they both seem to enjoy. The ad encouraged young men to join Uber as "partners."

Uber launched its operations in Egypt in 2014, with only 12 drivers. By 2020, approximately 200,000 people from varying socioeconomic backgrounds and levels of education, attracted by the flexible hours and the apparent autonomy, were driving for Uber. But, in the past two years, workers say they've seen their income slashed through company policies and an increased number of arbitrary terminations.

Ahmed Ali, who is now 34, saw the ad featuring Hazem Emam and decided to move from Sharqiya to Cairo to give working with Uber a try.

"I graduated with a diploma in commerce when I was 19 years old," Ali says. "I took up several jobs: at a mobile shop, for a contractor, I did all sorts of things as a day laborer. When I turned 22, my family thought it was time to marry me off. To get married, I had to find a stable job and earn a steady salary. After a long search, and through some connections, I landed a temporary contract job at the local council for LE950 (50 euros) per month. My role was to log incoming and outgoing documents: a tedious job with no prospect of promotion. My mental health suffered because of it, but I stuck with it for years."

Then, in 2016, he joined Uber through an agency. "[Uber] had a good reputation, which I thought would help me earn money," he says.

Ali didn't have a car so he rented one for LE150 (7.85 euros) per eight-hour shift. On top of that, he paid another LE50 (2.60 euros) per week to the agency, and 20% of all fares to Uber itself. But, he says, "I still made good money. So I moved my family to Cairo and started saving to buy my own car, which I eventually did, paying for it in installments."

Ali's income from Uber largely consisted of incentive payments. According to Belal Ezzat, a former Uber driver, incentive programs were a primary attraction for potential contractors. Drivers who made more than 20 trips per week would get an extra LE400 (21 euros). Those who worked during peak traffic hours could charge higher fares. They were also provided health insurance and accident insurance programs (applicable during rides only).

Three years into driving for Uber, things started to change for Ali.

Uber has slashed and canceled incentive programs for drivers as well as offers to customers.

"In mid-2019, the company raised its share of fares from 20 to 26%," he says. "It gradually slashed incentives until they were taken away altogether eight months ago. Partial health insurance was restricted to 'top drivers' who make more trips than [most of] their peers." Coverage for accidents during trips became less comprehensive and less dependable as well, according to Uber driver Islam Ibrahim [not his real name].

"We have temporarily suspended bonus rewards," Ahmed Khalil, Uber's general manager in Egypt, told Mada Masr via email. "But we will continue to work on innovating new solutions to support drivers, including our efforts to boost demand for the service in order to help maintain their income, especially during these tough times. We also have Uber Pro, which is a reward program that offers drivers various perks and discounts."

When Uber first launched, drivers and customers were both scarce, and the company needed to increase its appeal to both, a source who formerly worked at the UAE-based car hire company Careem — which was acquired by Uber in March 2019 — told Mada Masr on condition of anonymity. The company ran promotional campaigns offering lucrative incentives to drivers and giving customers discounted and free trips, without concern for profit margins mind.

The approach did succeed in expanding the company's base of drivers and customers, according to the source, but it caused it to post losses in Egypt and abroad. Now seeking to minimize those losses, Uber has slashed and canceled incentive programs for drivers as well as offers to customers.

In addition to the stripping of income and benefits, arbitrary suspensions are another factor contributing to worker dissatisfaction. 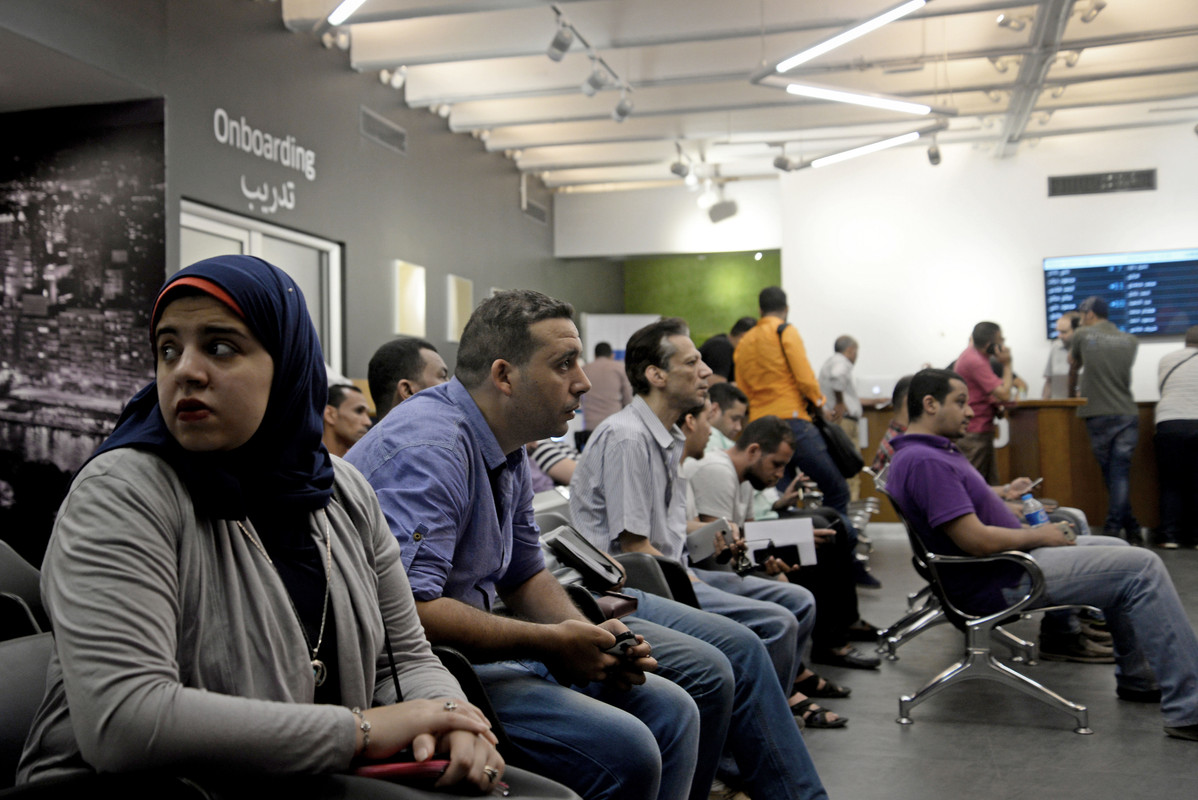 "Uber gave us a dream that turned into a nightmare," Ali says. "As the company canceled incentives, my income dropped substantially. I stuck with it for a while, hoping for things to start looking up soon. But one morning, I woke up to a message from the company saying, 'Your account has been suspended.' It was a shock."

Ali reached out to the company to find out what was behind the suspension. A week later, he received a dryly worded message: "Customers have complained that the position of the driver's seat made their legs uncomfortable." Despite persistent attempts, Ali was never able to reinstate his account. He found himself unemployed, in debt because of the car he bought, and overwhelmed with his family's expenses. He soon learned he was not the only one.

The arbitrary suspensions, Uber's Egypt GM Khalil claims, "happened due to a minor technical issue that affected some drivers. The company is working to resolve it. We appreciate all drivers and work to support all users for a smooth, convenient experience with Uber."

But the former Careem executive believes that the real reason for the sudden terminations of so many drivers is the lack of competition. Since Uber acquired Careem, it no longer has a motive to overlook some of the violations drivers used to get away with.

"I just don't understand why this is happening," Ali says. "Why did Uber flip on us like this? They used to call us 'partners.'"

For Amr Adly, a political economy professor at the American University in Cairo, the Uber model was met with such optimism because, with limited capital, it carved out a market that had not existed before, and one that engaged a large number of previously unemployed individuals by bringing advanced technology to unskilled labor. But "that optimism was premature," he says.

"Uber gave us a dream that turned into a nightmare."

Uber's financial framework, Adly explains, shows that the model cannot handle competition. It allows for only a very thin profit margin, and so the existence of multiple competitors leads to financial crises. This is what happened with Uber in China, where the company was driven out of the market by competitors. Uber compensates for this by monopolizing entire markets where it can, which is what happened in Egypt. With less competition, the company is able to pressure drivers to accept less favorable terms.

Ezzat hints at an ongoing effort by a number of former Uber drivers who were arbitrarily terminated to organize and bring a lawsuit against the company.

Can drivers sue the company if they never had a contract? Yasser Saad, a lawyer at the Legal Collective to Promote Labor Awareness, says the Labor Law deems any task performed by a worker for an institution or company as a work relationship, even without a written contract. If the relationship is terminated before the task is complete, compensation is due. This means that Uber is in a professional relationship with drivers, which cannot be legally terminated without the involvement of the Labor Bureau and the Labor Court. Since neither was consulted, the dismissal would be considered arbitrary and the worker should be entitled to compensation.

The random and sudden account suspensions by Uber were condemned in a statement by the Land Center for Human Rights, a non-governmental organization focusing on the rights of small-scale farmers and other labor issues. Its director, Karam Saber, says the relationship between Uber and similar ridesharing companies and their drivers is defined by forced acquiescence. The company states its conditions and the driver's only option is to tap accept on the app, Saber explains.

The attorney Saad points out that in California, a lawsuit against Uber led to a Superior Court ordering the company to consider its drivers employees rather than independent contractors, and therefore as people entitled to the same benefits as the company's other employees, such as compensation for dismissal. This ruling has been overridden in California by Proposition 22, a law passed by ballot in November which exempts ride-sharing companies like Uber and Lyft from classifying their drivers as employees. Uber and other ride-sharing and delivery apps spent around $200 million dollars backing Proposition 22.

A characteristic feature of the gig economy, Adly says, is that value can be created from nothing in no time, and also vanish in no time. "This makes for largely volatile work relationships. It does not allow for stable relationships like those which are established in industrial economies, for example."