The New Year's Eve prison exchange between Russia and Ukraine was a rare softening of hostilities in the occupied region in eastern Ukraine. Here's the story of one of those released.

On New Year's Eve, 76 people returned to Ukraine as part of the exchange of prisoners negotiated with Moscow: 64 civilians and 12 military personnel. Under various circumstances, all these people had been captured by the pro-Russian militia of the self-proclaimed Donbas and Lugansk People's Republics (LNR/DNR). Here is one man's story.

KYIV — A tall thin man meets us near the hospital. He is 52, there is a small scar on his face, in his hands an electronic cigarette that he will smoke almost the entire time that we speak. He is now undergoing treatment in a hospital near Kyiv. The interview is conducted during a walk through the woods near the hospital. He smiles and says: "I dreamed of walking freely like this. You can't imagine what happiness this is!"

Andriy Yarovoi is a human rights activist for the Alliance of Public Health charity foundation, and was detained on August 26, 2018, at the checkpoint by LNR fighters, while he was traveling to the occupied Donbas area on a monitoring mission. Then the connection broke: the basement, the local pre-trial detention center and the penal colony. He spent 489 days in captivity. We will let Yarovoi tell his story: 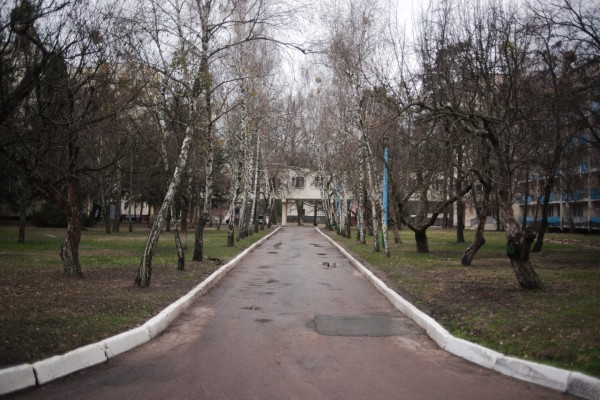 The way to the hospital where Andriy is receiving treatment after detention, Feb. 2020. — Photo: Maks Levin/LB

The mission
It was not the first time I traveled to the occupied territory as a representative of the Alliance since 2015. I've been to Donetsk, Lugansk, and to small towns as well. My mission was to study the situation of HIV/AIDS, viral hepatitis, and tuberculosis.

The trip usually lasted three to four days. I obtain information from local health system employees and communicate with those groups that are high-risk: drug users, sex workers, LGBT. The main question is whether they get the help they need in terms of screening, contraceptives, treatment.

Every year it's getting worse in Donbas.

Monitoring of the uncontrolled territories is critical: Every day, thousands of people cross the contact line between Ukraine and the occupied territories of Donbas in both directions. Every year it's getting worse in Donbas: The local government doesn't consider these people there, and nobody helps them.

After my detention, no one from the Alliance wants to go to the occupied territories, and in 2019, all HIV prevention programs supported by the Global Fund to Fight AIDS in the Lugansk region were closed.

The detention
Why did they detain me? I had pharmaceutical pills with me. In the past, I used heroin, but since 2009 I went to an opioid substitution therapy program and quit. Since then, medicines have always been with me; there have never been problems with "crossing the border." I had permission from the Kyiv hospital with me. But that time at the checkpoint, LNR fighters explained that substitution therapy in LPR, as well as in Russia, is prohibited, my pills are just dope, and all the papers are not important.

They took my passport and told me not to worry, "everything is fine, we'll talk to you tomorrow." The next day they took me to Lugansk for a "conversation." As we arrived at the local government building, representatives of the Ministry of State Security of the LPR took away my phone, handcuffed me, and put a bag on my head. 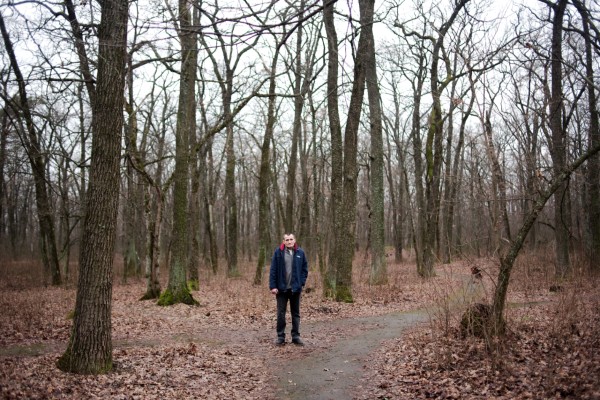 Andryi in the forest near the hospital during the interview in Feb. 2020. — Photo: Maks Levin/LB

The basement
The next six months I spent in the "basement."

There are no windows, very bright light round-the-clock, many cameras and a very strict set of rules — you can't even talk too loudly. You understand what time it is only when the food is brought. And, of course, by the interrogations. They were carried out only at night. Those who were in the "basement" before say that the conditions are much better compared with the past.

If the interrogations night is coming — it's better not to eat in the evening, easier to go through that way: They handcuff you and put a bag on your head then they start to beat the information out of you.

They are all angry there.

At first, they suspected me of cooperating with the Security Service of Ukraine, asking what kind of information and for what purpose I gathered for the Alliance. Finally, they suspected that I worked for British intelligence. The parent organization of The Public Health Alliance is located in Brighton, UK.

The voices of those who beat us constantly changed. I only remember one, a young voice, always angry like a dog. They are all angry there. 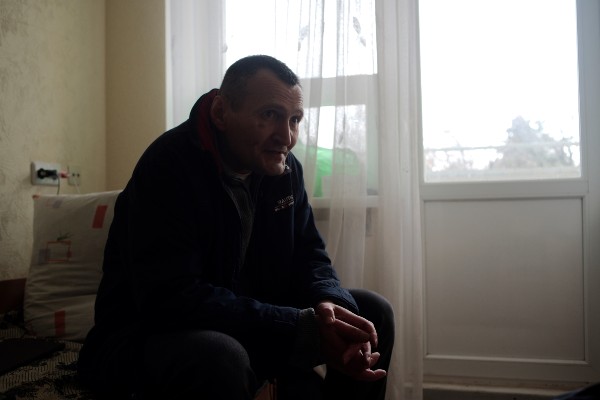 Andryi in the hospital during the interview. — Photo: Maks Levin/LB

The investigation
On October 15, 2018, I first met with an investigator from LNR, the only face I'd seen. There was already a lawyer in the office hired by the Public Health Alliance. He lives in Lugansk and collaborates with international organizations.

The investigator smiled and asked if anyone had touched me? I calmly answered: "No, no one." They let me sign a document saying that the LNR security officers did not exert physical or psychological pressure on me. A lawyer sitting next to him with a serious face asked if this was true. Of course, what else are underground cells made for?

Besides "smuggling," they charged me with "possession and transportation of drugs," and no matter what I said, the prosecutor's final answer was that such a charge would be better for the exchange of prisoners. I have the feeling that I was seized to replenish the "exchange fund."

In February 2019, I was transferred to the "Lugansk pre-trial detention center," I was there for almost two months, before the "trial." After the basement, the detention center seemed amazing: There was a window, you could see the sky, walk, and there was even a TV with local and Russian channels. 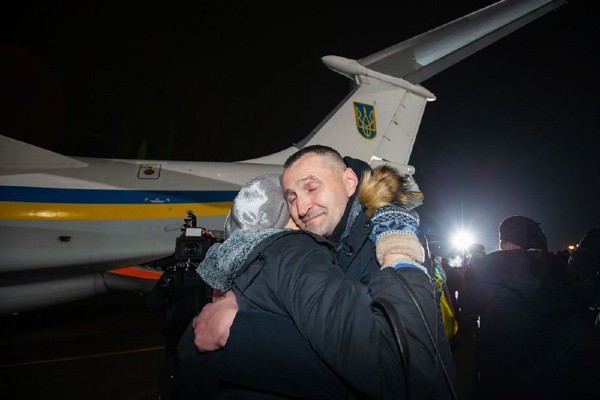 The trial and the colony
On April 19, there was a "trial." I did not deny that this is my medicine, but no one paid attention to papers with permission to use them. I got ten and a half years. I learned that the criminal code in Lugansk was 90% percent taken from the code law of the Russian Federation. I was sent to a high security penal colony.

Now there were barracks instead of the cells, 70-80 people in each, no free movement between the barracks. There is no running water in the camp, so it was brought in barrels, and five convicts pushed this one and a half tons to the barrack. There is no sewage, and toilets are outside; in winter, we'd heat stoves with coal. This zone was built in the early 1950s, and so it remained like it was in Stalin times.

Homecoming
I learned about the exchange just a few days prior, there were no expectations for this year, although I was in the exchanging lists from the very beginning. There were also talks that the Minsk talks broke down again, and I thought that I would certainly be in the camp for another New Year.

Now I need to get over what happened, get used to the world.

Even after the exchange, there are still many people left who somehow helped Ukraine. There is organized human trafficking going on there. When we were driving to the checkpoint for the exchange, LNR fighters were constantly asking if someone wants to stay in the occupied territory. 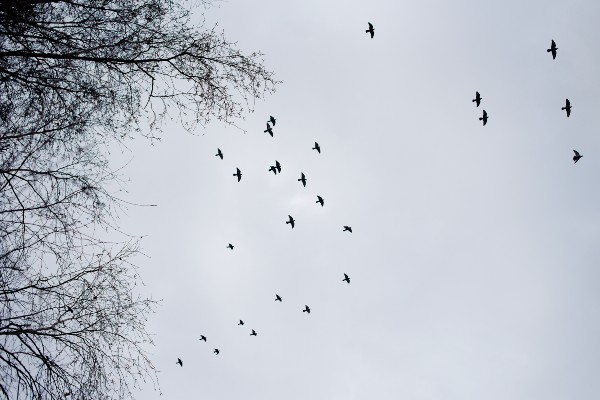 Near the hospital outside of Kyiv — Photo: Maks Levin/LB

In Boryspil, my younger brother and mother came to meet me. While I was away, my father died of cancer.

It is very difficult to lose contact with the world. The lack of replacement therapy pills also affected my mood, and depression is constant. In the hospital, they offered a psychotherapist, but I have not yet talked to him. Now I need to get over what happened, get used to the world, and somehow forget everything that was there. I have a few more medical procedures and that's it, I need to return to work. Until now, I have not fully believed that I am home..

We must remember the many lives lost to coronavirus. But we should also not forget the fate of ...

How To Renovate Kyiv: Start By Replacing All Soviet-Era Slums

There's an old joke about the apartment complexes named after Khrushchev.