Hanau Attack: Echos Of The Past In Germany's Far-Right Hatred

After the killing of nine in the western German town of Hanau, it is clear the state must do more to crack down. But the responsibility extends much farther.

MUNICH — Watching the video in which mass murderer Tobias R. explains to the world that the US military is killing children and engaging in satanic rituals in underground bases, it's easy to dismiss him as crazy. But now he has killed ten people, all of whom – apart from his mother – he shot because he wanted to kill foreigners, immigrants, non-Germans. The attacks in Hanau were racially motivated terrorism – regardless of whether the perpetrator was suffering from mental illness or not.

For Germany, this brings back uncomfortable echoes of the first half of the 20th century, when racially motivated terrorism grew out of widespread xenophobia and racism among the population, mainly – although not solely – directed at Jews. It started with a few individual perpetrators, then groups that were protected by parts of society. They were not seriously investigated by police, and the justice system often treated them leniently as "politically motivated offenders."

The terrible events of the 1920s and 30s are not about to repeat themselves. Nowadays there is no danger of a coup, no revisionist foreign policy that aims to reunite Germany's "stolen" land. Most people live, think and love differently from how they did a hundred years ago. However, in Germany, there is plenty of reason to remind ourselves of what went before, as some of what is happening now is uncomfortably familiar. 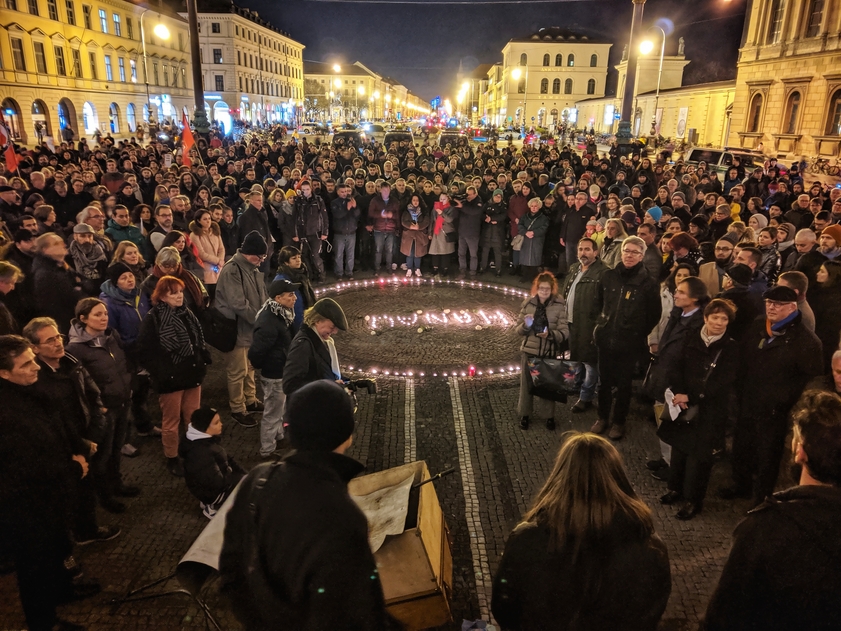 At Munich's Odeonsplatz, a memorial for victims of the Hanau attack — Photo:Sachelle Babbar/ZUMA

The so-called "lone wolves" who carried out attacks in Munich in 2016, Halle in 2019 and now Hanau, as well as the neo-Nazi extremist who killed politician Walter Lübcke in 2019, acted in the knowledge that there are many others who think the same way they do – even if they wouldn't commit the same acts. The terrorists are targeting the same people who were targeted a hundred years ago: Jews, foreigners, representatives of "the system." Now, Muslims and refugees have been added to the list. You only have to look at the U.S. to see how quickly mass murders can change a society: there, the number of shootings has become so great that they seem to be accepted as part of everyday life. The President says his prayers are with the victims, society is outraged, and three months later another shooter kills twelve people.

Although it's terrible, there is still hope. It is a good thing that the supposedly homogenous Germany of the 20th century no longer exists. For it was this Germany that was responsible for one of the worst crimes in human history. Today Germany is a diverse country that is looking towards the future with a fierce determination. Despite the attacks in Hanau and Halle, Germany has never been as good, and as free.

This Germany is what the murderers are attacking when they shoot migrants. But they are not the only ones we have to fight. We must also look at the people who prepare the ground for them. People who constantly speak about "foreign infiltration," who denigrate specific communities, who compare lifestyles to diseases, who try to build barriers between "us" and "them." People like polemical politician Thilo Sarrazin who disparage Muslims; people like reactionary Alexander Gauland who break taboos because they want to divide society; people like Alternative for Germany (AfD) party member Björn Höcke who use neo-Nazi rhetoric. Of course these people don't load the murderers' guns, but they create an atmosphere in which the murderers don't feel like "lone wolves" – because they're not.

Yes, the state has to take a stronger stance against right-wing extremism in all its forms. It needs to offer better protection to synagogues and mosques while the threat is so significant. Restricting individuals and shooting club members from keeping certain guns at home would also be an important step towards prevention.

However, none of this alone will be enough. Every individual also has a responsibility, whether they're making insensitive jokes or not speaking up against everyday racism. We have to call a spade a spade: anyone who votes for AfD is aligning themselves with the far-right, as they are also voting for the right-wing extremists within the party. This country, its society and its people – whether they originally come from Berlin, Ankara or Krakow – deserve protection, especially from those who, through their words or their actions, want to turn the clock back.