China's Dark Side Landing: How The Moon Loses Its Mystery Appeal

China's lunar rover on the dark side of the Moon on Jan. 11 - Cnsa/Xinhua/ZUMA
Kathleen Hildebrand
SUDDEUTSCHE ZEITUNG
2019-01-25

The Moon's cultural history is one of disenchantment. Thousands of years ago, people still believed that it was a deity, there were legends about beautiful Moon girls and a man in the Moon. But its proximity to Earth made the myths around it one of the first victims of the scientific worldview. Already in the 16th century, the English proverb "the Moon is made of green cheese" was intended as a mockery against stupid, credulous provincial residents. The Enlightenment made Moon people and Moon cities the subject of literary games and utopias. The Italian poet Ludovico Ariosto, for example, sent his Raging Roland to the Moon, where he finds all the things that had been lost on Earth. Among them was Roland's own mind.

Back then, behind the moon, there was still something to discover.

Then came the Moon missions and plans to use the Moon as a gigantic mine. The commercialization of the Moon has long been a feature of works of fiction. In the 2009 science fiction film Moon, a worker drives a mining vehicle over its surface in what is a tedious routine. And in the 2008 Pixar animation Wall-E, next to the landing site of Apollo 11, only an advertising hologram flickers, pointing to a mall that no longer exists.

Now the first landing by China of a space probe on the far side of the Moon removes another piece of what was left of the satellite's secrets. While telescopes had long since measured the earthward side down to its smallest craters, moon globes had to remain almost half white until the end of the 1950s. Back then, behind the Moon, there was still something to discover. Only in 1959 did the Soviet probe Luna 3 transmit the first images from its far side to Earth. In 1968, on the Apollo 8 mission, the first humans orbited the Moon. Today, we know very exactly what the far side looks like — unsurprisingly, its craters are rather similar to the ones on its near side. But what we don't see every month in the sky can at least retain the appearance of mystery. 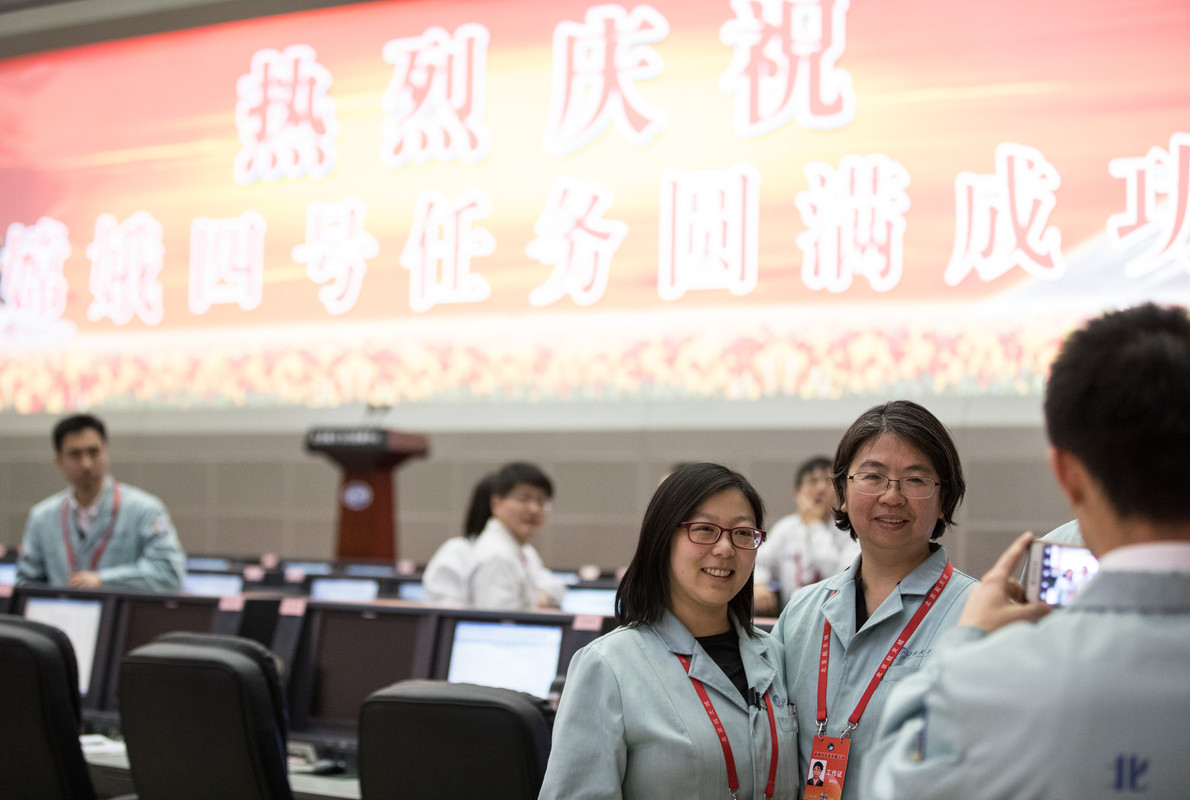 Staff at the at the Beijing Aerospace Control Center on Jan. 11 — Photo: Xinhua/ZUMA

At least since Pink Floyd's album The Dark Side of the Moon and its iconic prism cover, it's become an image for the unknown, the gently threatening "otherworldly". So much so that Swiss novelist Martin Suter didn't have to include any celestial bodies in his novel The Dark Side of the Moon. Murmuring the words is enough to make the connection to the hidden shallows in Suter's main character's psyche.

The darkness becomes more tangible in the 2012 low-budget film Iron Sky, partly financed by crowdfunding: After their defeat, the Nazis built an enormous station in the style of architect Albert Speer on the far side of the Moon and gathered strength for their return to Earth and their world domination. The film's fans were so enthusiastic about the satire that they raised enough money for a second part, which is scheduled to be released in 2019. And as chance would have it, the now less-mysterious far side of the Moon is no longer enough: in the follow-up, the Nazis will have dinosaurs.