Cairo Is Urban Trauma, Postcard From A City Planner

A traffic jam along al-Azhar street in Cairo. - Gehad Hamdy/DPA via ZUMA

This dearth of urban planning in the Egyptian capital dates back half a century. But it reached a new peak starting in 2019, when one of its last livable districts saw its old ways demolished.

CAIRO — Inhabiting a city is an emotional and a psychological experience. For the past decade, I have lived in Cairo, a city I found to be exciting and full of potential from the perspective of an urbanist who studies cities, architecture and is concerned with heritage. I lived in Heliopolis, which I thought was one of the last sections of the Egyptian capital that, despite poor urban management for the past several decades, retained qualities that made it a livable place. It had trees, ample sidewalks, interesting architecture, and a neighborhood feel within its many subsections. It was a district with a relatively high quality of life compared to other parts of the city. There were also the remains of an extensive public transport system — the tram — which despite being dysfunctional, at least allowed residents to dream of its restoration one day under the right leadership.

Urban governance has been nonexistent since the military coup of 1952, when the Free Officers received support from the CIA through a covert program known as Project Fat Fucker to oust King Farouk, seen as uncooperative in the post-World War II era. It was an era shaped by postcolonial politics or, to be more precise, when formal colonialism was morphing into a new system that maintained colonial control, with access to assets, markets, raw material and labor under the guise of independence — a distracting form of political theater built on the emotions and desires of the masses in former colonies.

This dearth of urban planning was strikingly manifest in the summer of 2019, when over the course of several months, all the features that made Heliopolis among Cairo's more livable districts were swiftly removed. The residents had no say in the matter. Century-old trees were uprooted, public transport infrastructure was removed, and sidewalks were made smaller. Such actions are not only counter-intuitive to standard urban management logic but also have a severe impact on the value of private property in the area and, more importantly, on the psychology of residents. This is urban trauma.

Cairo today, and for much of the past decade, is an unstable city. When protests erupted in 2011 in the capital and across the country, occupying urban space was central to dissent. Conversely, urban infrastructure, particularly road systems, proved essential tools for authorities to assert urban control, such as the rapid deployment of security vehicles to the streets in an effort to impose curfews. Other examples include the cutting of electricity and the internet. In addition, there were many insidious forms of control that worked to destabilize the urban environment and make it less hospitable to potential protesters as well as to create a constant state of anxiety, even inside the home.

Over the past decade, Cairo has transformed immensely, with slogans such as "development" and "progress" operating as smoke screens for a violent remaking of the city for other ends. Counterrevolutionary forces argued that stability was more important than political change, but on the neighborhood level across the country there has been no stability whatsoever. Space is disfigured on a daily basis, trees are removed, buildings are demolished and heritage collapses. Within a matter of days, weeks or months, residents have lost their orientation around neighborhoods in which they have lived their entire lives. What kind of stability is this? And for whom?

Since the 1950s, urban planners, mostly in the United States and Europe, have understood the psychological potential of cities. Town planning can engender a sense of belonging, strengthen local communities, and bolster neighborhood ties. Conversely, it can also enforce a sense of individualism, manipulate residents into becoming consumers and intensify feelings of loneliness, alienation, anxiety and fear.

When the United States began its "shock and awe" campaign in Baghdad in 2003, the intention, as the name suggests, was to induce psychological shock, to overwhelm and control the population of an entire capital in a mere instant. In today's urban environment, psychology is always at work: in the hyper-surveillance of Dubai or Beijing, in the advertising-saturated Times Square in New York or London's Piccadilly Circus; or in the presence of military camps within Egyptian cities, with conscripts placed in watchtowers, their rifles pointed outward at the city around them. In all these examples, and many more, urban environments impact human psychology, intentionally or not, where technologies, spaces and tactics are weaponized by those in power to control populations.

Despite the apparent availability of funds to build an entirely new capital or attract investments for superfluous additions to the city — such as mimicking the London Eye on the Nile — Egypt's more mundane, yet crucial, urban needs have not been met. In a political environment orchestrated around the notion of megaprojects touted by those in power as evidence of their rule, fixing sidewalks, planting trees and improving public transport do not add up to iconic achievements. Instead, Egyptians have been increasingly gaslit since the 1990s into believing that their cities are irreparable and nothing more than reflections of the Egyptian psyche: chaotic and unordered.

Through psychological manipulation that serves undemocratic rule and uncontrolled capital, it has become common to hear that something is fundamentally wrong with Egyptians themselves and that only money can buy them a ticket out of their urban misery. Promotions abound for privately-built gated developments, with names meant to evoke life in Marseille or other far afield spaces such as "Dreamland" or even "Future City," which feels all too much like the dreary present.

Over the last several years, Cairo has been the laboratory for some of the most aggressive urban interventions in its entire history. From highways that negate the existence of residential buildings within arm's reach, to the demolition of hundreds of mausolea containing the remains of the city's dead, including many of its most important public figures, these projects seem to negate the very existence of the city's inhabitants.

In the current political climate, where any form of opposition is immediately branded as a threat to the nation and its security, such projects bulldoze through the urban fabric under a plethora of flags and nationalistic slogans such as "we build for you." At the crux of the matter is a form of state paternalism that echoes statements made by officials during the legendary eighteen days of the revolution: "Egyptians are not ready for democracy" — which in urban affairs translates into "Egyptians don't know what is good for their city."

Cairo has been transformed into a place without memory.

For many inhabitants of the city there is a sense of being held hostage, of feeling helpless and having no control over the environment they occupy and inhabit. The numerous interventions happening at once are disorienting, they create chaos and disperse any effort to record what is happening. Alongside these processes, and in the absence of robust institutions that maintain the memory and history of modern and contemporary society, Cairo has been transformed into a place without memory, perpetually stuck in a disorienting present. These are tactics of psychological control and many Cairenes may be suffering from post-traumatic stress disorder, caused not only by the instability of the city, but by the increasing sense of anxiety that comes with pervasive insecurity and predatory surveillance.

In the aftermath of 2011 Cairo saw an immense increase in surveillance cameras mounted in public spaces. This was followed by a law that forced private businesses to install cameras outside their premises. Trees may provide shade and clean the air, but in a security state they also hinder surveillance. So trees must be removed. Occasionally, to counter criticism of tree removal, imported palm trees are planted as decorative replacements whilst lining the pockets of importers. The imported palms do not survive well in Cairo's harsh environment and often die shortly after planting. This seems counterintuitive: Why import palm trees from vast distances to a country rich in its own local varieties of palms? Such questions can best be answered by adjusting the expectations or refocusing the purposes of the urban interventions taking place. 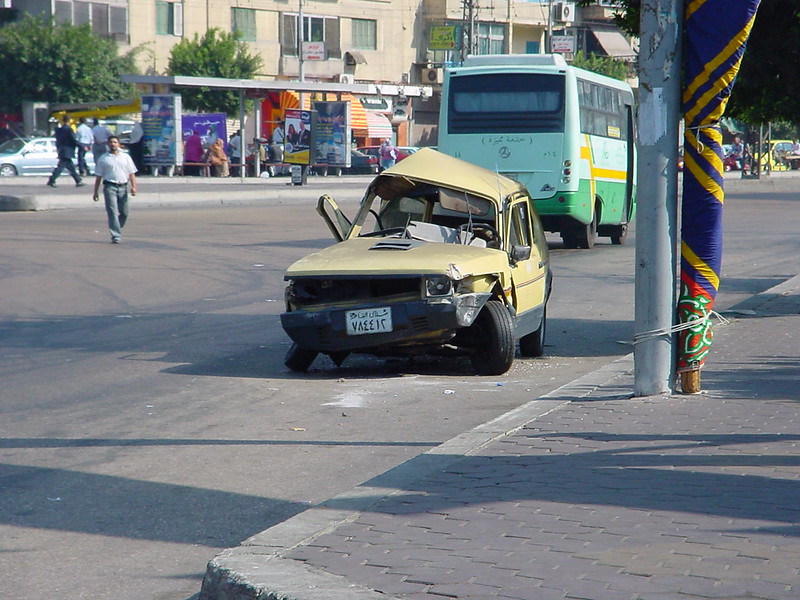 Cairo street scene in 2005. Not much has changed since. — Photo: JJ Jester

Such interventions are driven by multiple interests; not the interests of the masses, but rather those of the security apparatus looking to open up spaces for observation and control and for those who receive direct, no-bid contracts and are only looking to maximize profit. Regardless of the form they take, these interventions are in fact fulfilling exactly what they are designed for; the public does not figure into the state's considerations.

In 1948, in the aftermath of World War II, and following the exit of British troops from Egyptian cities, architect Sayed Karim consulted Al-Musawwar magazine on producing a series of spreads that illustrate key urban challenges facing Cairo in order to get the public on board for the necessary changes. One of the spreads titled "Cairo is suffocating, let her breathe!" was centered on the issue of green space. The spread was mainly visual accompanied by a short text. It included an aerial view of the capital with a graph below visualizing the amount of green space in various parts of the city as measured by the ratio of population density to public parks. It presented both a bleak picture and a call to arms, arguing that the city was dangerously lacking in green space which correlates directly with higher rates of infant mortality, disease and social ills.

At the time, only one percent of the city's total area was dedicated to parks, while it needed about ten percent for healthy levels. Six districts, such as Bulaq, Shubra and historic Cairo, which were collectively populated by over 1.1 million residents, did not have access to any green space. The text concludes with a call to establish a municipality to govern Cairo and manage its affairs, including the lack of green space. "Enough of the politics of improvisation which have cost the state and the people immense losses," the architect concluded.

Karim was an ambitious and vocal architect and urbanist and his daring message reflected the widespread revolutionary fervor and public criticism sweeping Egypt after 1948. Others joined his calls for a municipality and the demand began to materialize in 1949. However, the heavy-handed policies of the new military regime which co-opted the revolution in 1952 led to the cancellation of the short-lived municipality. The building erected for the municipality was then used as the headquarters of Nasser's Arab Socialist Union and subsequently the National Democratic Party.

In this new era, Egypt's heads of state did what they saw fit with the city and its people, there was no room for a politics of participation such as a democratic municipality. Ever since, the city has been a site for projects decreed from above and designed to improve the image of leaders rather than provide its residents with needed services. As for voices such as Sayed Karim, who looked to galvanize public opinion with urban critique, his career was cut short, his offices were shut by the state and he was placed under house arrest in 1965. Cairo today continues to live in the shadow of this traumatic moment.

*Mohamed Elshahed is a curator, critic and architectural historian focusing on modernism in Egypt and the Arab World.

Women in Egypt have definitively broken the silence around sexual violence — but what comes n...