Taco Bell in Mexico? McDonald's in Hamburg? Americans find the recipe abroad, bastardize it, and then have the stomach to go back and sell it where it all began.

PARIS — Italy's borders have been breached, but this time it isn't by the Huns, the Visigoths or the Normans. It's Starbucks. The world's largest chain of coffee houses boasts more than 28,000 venues in 78 countries. But only now has the retailer finally found its first location in caffè-craving Italy, with the opening last Friday of a new Starbucks in Milan.

Howard Schultz, who recently stepped down as CEO and executive chairman of the U.S. company, had been trying for years to gain access to what he calls "the country of coffee." Both Italian habits and government regulations had resisted the advances — until now. Fittingly, the chic northern city of Milan is where Schultz was initially inspired to create his own spin on coffee culture back in 1983.

Starbucks is just one in a succession of American restaurant chains that have pillaged another nation's cuisine, tweaked it for U.S. consumers, and returned triumphantly (or otherwise) to sell it in the market where it originated. In another Italian case, Domino's Pizza brazenly landed three years ago, also opening its first store in Milan. Naples, the proud home of the modern pizza, remains unsullied.

McDonald's did the same thing almost 50 years ago. The hamburger, as its name implies, originates from a similar dish created in Hamburg, Germany in the 19th century. The French fry, whose name may be misleading, actually comes from francophone Belgium. McDonald's started selling hamburgers and French fries in the United States in the 1940s before bringing the fare back to Europe in 1971.

Our espresso is the envy of the whole world.

Assimilating these American companies can be challenging. There has been controversy over the presence of McDonald's in Europe for decades. Notably, two franchises were destroyed by protesters in 1999, one in Belgium by arson and the other in France, where a crowd dismantled the building, plank by plank.

Starbucks and Domino's have been the targets of a rash of insults. On a Twitter account "Italians Mad at Food," a recent post lamented what Americans were inflicting on the authentic pizza menu. "Chicken wings as a side dish for pizza," it said. "GTFO. All of Italy just died of disgust."

Milan-based business daily Il Sole 24 Ore reports that several leading politicians have used the new Starbucks as an opportunity to declare their national culinary pride. Center-right leader Giorgia Meloni tweeted, "Tomorrow is the opening of Italy's first Starbucks, the American chain of 'coffee.' I'm trying to figure out how you can prefer their beverage to our espresso, which is the envy of the whole world."

Meanwhile, in Mexico, Taco Bell has persistently failed to establish a stronghold in the birthplace of the taco. After nearly 20 years of trying, it closed its last store in Monterrey in 2010. Ten years before, Dunkin' Donuts abandoned an effort to penetrate the market in the Netherlands, whose olie koeken, or oily cakes, are the foundation of the modern doughnut.

The invaders have proven, however, to be persistent. Dunkin' Donuts eagerly returned to the Netherlands in 2017, where it plans to open 25 new store locations in the next five years. American culinary usurpers have even managed to enter the Chinese market amid a simmering trade war and posturing over territory in the South China Sea. P.F. Chang's China Bistro, headquartered in Arizona, opened its first restaurant in a Shanghai department store earlier this year (it is advertised as an American bistro). And Panda Express, whose founders are first-generation Chinese immigrants, are looking to expand there as well. 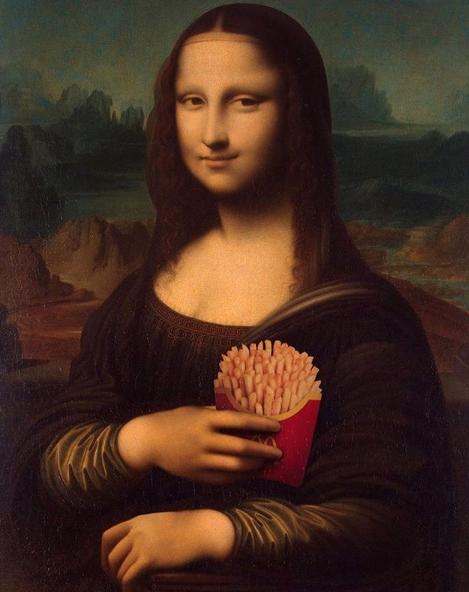 Fries at the Louvre? — Photo: McDonald's France via Instagram

The situation for McDonald's in France has come full circle, as employees at a franchise in the southern city of Marseille are currently fighting to prevent its closure, which they say will take away a longtime employment opportunity for the community's vulnerable youth.

"Our battle is not to defend McDonald's, it is the honor of the workers of these neighborhoods," one of the protesters told Libération newspaper. "They're always talking about crime and kalashnikovs. But here, there are people who want to work and come to McDonald's as a way out."

Yes, it should be noted that (gourmet chefs and anti-globalists be damned) there are now more than 1,400 McDonald's across France. As for Starbucks, in China alone the java giant is reportedly opening one new store every 15 hours.

For a Milanese writer, this is how his family lunch looks right now.

Italy was hit particularly hard and early by the first wave when northern region of Lombardy beca...