BMW Wants To Be Like Apple, Reimagining How Cars Are Sold

MUNICH — Tobias Fröhlich no longer wears a suit and tie to work. The former BMW salesman dons a white polo shirt and blue trousers for his job at a new branch of the Munich firm where he greets customers with a smile, iPad in hand.

Fröhlich is a "product genius" and as such is part of the new sales concept BMW has been introducing to its German dealers for about a year. That’s another way of saying adviser. It’s a concept BMW learned from Apple, where there have long been young experts to advise clients without putting sales pressure on.

BMW's use of product geniuses reflects a larger shift in the way cars are sold. Cars haven’t been indispensable consumer goods for years, paticularly when it comes to young urbanites, who have other available transportation options, including car sharing.

The sector, as a result, is being forced to make buying a car more of an experience, something that — apart from the little scenes that some dealerships stage when they turn over the keys to a customer — is something car companies avoided doing for years.

Reading the writing on the wall

Dealerships may set themselves up in modern palaces, but behind the glass façade things usually proceed exactly as they did in the last century. Customers make an appointment with a suit-and-tie-wearing salesman who then closes the sale filling out all the papers like some kind of functionary.

Ian Robertson, the BMW’s group’s chief of distribution and marketing, is in the process of changing all that. "The car industry is 100 years old, and cars have changed a lot during that period. But the concept of how to sell cars has stayed the same for a long time," he told Die Welt.

The sector can no longer afford this, and has been aware for a while now that they are losing the young market segment. People who buy new cars are increasingly older. If young buyers decide to buy a car it’s often a second-hand one.

When the car market was booming, the sector could ignore the writing on the wall. Nowadays, competition has become cutthroat. Sometimes the dealerships can only sell by giving huge discounts. They make their money with replacement parts, service and used vehicles. There’s little profit in new cars, if any.

Resigned, many dealers give up. And what that means is that formerly independent dealerships belong to ever-larger groups. In Germany, the market leader is a Stuttgart-based group called Emil Frey followed by AVAG in Augsburg and Gottfried Schulz GmbH in Ratingen.

The future will see fewer and fewer dealerships outside cities — "car dealers will be concentrated in bigger cities with service facilities on the outskirts," says Willi Diez, director of the Institute of Automotive Business at the University of Applied Sciences for Economics and the Environment in Nürtingen-Geislingen.

Currently Daimler is seeking buyers for some of its dealerships and in the past few years BMW too has been looking to reduce the number of its dealers. Dealerships that stay in business simply represent more brands than before and thus increase their chances of turning a profit. "What’s important," says Robertson, "is that our dealers make a profit so they can invest."

Big fancy sales palaces in large cities such as Munich, Berlin, Cologne and Hamburg will probably continue to be important as they are showcases for brands. Their influence extends well beyond their immediate geographical area, which is probably why BMW invested 65 million euros in the new Kaiserdamm dealership that opened this spring in Berlin.

The company uses its new sales concept, which it calls "Future Retail," here as well. By the end of the year, 100 of the 527 BMW garages in Germany should be using it too, and all of them should be by latest 2016.

"The point is to get customers into the cars much earlier than we did before," says Nicolas Polydoros, sales head at the Berlin branch. "Their visit to the dealership has to be made more interesting."

Tobias Fröhlich, who is one of the brand’s 1,380 product geniuses worldwide, is supposed to help with just that. His desk is near an electric BMW, the i3, and this is where he asks customers to take a seat. "I then find out exactly what they want a car for," he says.

After that, Fröhlich calls up relevant BMW vehicles on his screen so that customers can see them from the inside, outside, and every possible perspective. Resolution is so high they have no trouble telling the difference between raw and soft leather used for interior fittings.

He stresses that these are advisory, not sales, discussions. "I don’t get a commission if the customer buys," the product genius says. The pressure to close is thus reduced, and it’s only if the customer displays concrete interest that Fröhlich turns him or her over to one of the salespeople sitting at desks opposite his.

Fröhlich takes his time. His agenda for the coming week is full, and he blocks up to three hours for clients. "If somebody tests a car they want somebody to talk about it with when they get back," he explains.

That sounds expensive, but remember, Fröhlich isn’t selling anything. The investment can still be worthwhile for BMW as Fröhlich also ensures that when the customers reach sales staff the latter can focus exclusively on the nitty-gritty: selling. He often brings clients over who just want to hear the financing details before signing, thus earning the salesperson an easy commission. 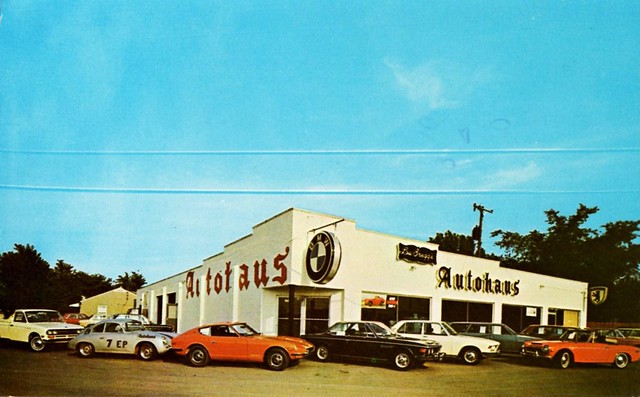 In some respects, little has changed since this vintage shot. Photo: Aldenjewell

On-site advice no longer has the importance it used to have. Anybody visiting a dealership today pretty much knows what car they want to buy, having researched it thoroughly on the Internet. "Ten years ago customers visited on average four times before they bought a car," says BMW distribution boss Robertson. "Now they often come just once — 90% of them have already checked everything out on the web."

Dealers have to learn how to handle that. "Some dealers claim that fewer and fewer people are coming to the showroom," Robertson says. "I say, no, it’s still the same number of people. They’re just coming fewer times. Dealers who don’t want to lose their relevance for the customer have to change."

That also means creating a buying experience along the lines of what luxury brands such as Louis Vuitton provide. "We’ve looked at a few companies in the luxury industry," says Robertson. "They tell a story about their brand and their products. We do that too. We want to create a whole new buying experience."

Other brands have recognized this need as well — in big world cities Audi has created virtual showrooms where customers can configure their own car, and Mercedes has dealerships that function like boutiques.

But things can’t stay there. "We have to go to the client," says Ian Robertson when asked where the sector will be heading over the next few years. "That's why I tell our dealers not to build additional service space in their garages. Car maintenance in the future will be conducted on site, when the owner isn’t using the vehicle, for example in the evening when he or she is at home."

Should that become reality, car dealerships of the future will have even fewer people in them.

Many urban dwellers fantasize about a rural lifestyle, especially right now. But leaving city life behind is easier said than done.