Pupils in Kenya are heading back to schools, which are reopening on Jan. 4 after a nine-month long closure due to the coronavirus pandemic. - Donwilson Odhiambo/ZUMA
Worldcrunch
WORLDCRUNCH
2020-01-04

Welcome to Monday, where the UK blocks Assange's extradition, vaccinations are moving too slowly (almost) everywhere and the Asian business world is asking: Where's Jack? We also follow Le Monde to Casablanca where Moroccans are rethinking what it means to be a man.

SPOTLIGHT: DEMOCRACY HAS MORE GRIT THAN YOU MIGHT THINK

There are more and more elected leaders these days willing to ride roughshod over the rules of democracy. But that hardly means the system's doomed writes Pedro Viveros in Colombian daily El Espectador.

In Colombia and elsewhere, there are voices declaring that democracy is doomed. They point to the proliferation of erratic leaders and budding dictators, people like Trump, Maduro, Putin, Duterte in the Philippines, or Nicaragua's Daniel Ortega, but without properly analyzing things in any of those countries.

Instead they argue that the presence of such leaders shows how weak the citizens of those nations are. And their conclusion is that the 21st century is destined to suffer another epidemic: a plague of autocrats.

The ideological references of the past century, namely fascism, Nazism and communism and their "charismatic" leaders, have led some to assume that history will repeat itself. They argue that the present crop of pestilential challenges will inevitably take us back to the foul prescriptions that produced the world wars. And here we thought things couldn't get any worse!

The deplorable events that left society fractured between three worlds — the Western and Eastern worlds, and we in the developing world — were based on extremist conceptions of nationalism that made jingoism a defensive response to anything external. Xenophobia became a rhetorical instrument amid unprecedented socio-economic crises. Voting, democracy's simple tool, was no longer enough to hold back the hordes of supporters running after the paradise promised by a Hitler, Mussolini or Lenin.

Today, too, the vote might not be enough to contain the pandemic of demagoguery. Fortunately, the many crises humanity has faced over the past century have raised the immunity of the democratic body. Its boosted defenses now include complementary mechanisms like the separation of powers, charters, multilateralism, independent bodies and human rights courts, the World Court at The Hague and the globalization of problems, but also solidarity, solutions, knowledge and education.

Voting has become the beginning and the end of a system designed to call out, criticize and control its own outrages. Donald Trump's desire to remain in the White House is, well, just that, a desire. And fortunately, the laws of the United States, forged to prevent entrenchment in power, will prevent his doing so — just as Colombia's Constitutional Court prevented former president Álvaro Uribe from seeking a third, unconstitutional term.

Likewise, multilateral coordination has guided scientific action against the coronavirus, creating a "live-and-direct" global response that has prevented the pandemic's already tragic impact from taking an even higher toll.

Democracies are behind the denunciations of corruption and of unnecessary wars. They have helped reduce poverty worldwide and forge sustainable development goals set out in the UN, itself a democratic consequence of the threats of intolerant elements mentioned above. All these efforts and tools will be crucial not only for keeping democracy alive, but also for protecting those of us who vote in this most beguiling and enduring of government systems.

• COVID-19 latest: Delays in vaccination programs hit Germany, France, the U.S. and other countries, with high infection rates continuing around the world as COVID-19 promises to weigh on the world for months to come. An 82-year-old British diabetes patient became the first person to get the Oxford-AstraZeneca vaccine and Israel sets the pace for rapid vaccinations.

• UK blocks Assange extradition: A London court blocks extradition to the U.S. of WikiLeaks founder Julian Assange because of concerns over Assange's mental health. The 49-year-old is wanted over the publication of thousands of classified documents in 2010 and 2011.

• Iran uranium: Iran has resumed enriching uranium to 20% purity at an underground nuclear facility, the government has announced, breaching the 2015 nuclear pact with world powers.

• Trump's high stakes: All 10 living former U.S. defense secretaries sign a letter warning the military to not intervene on behalf of President Trump's continuing effort to overturn the Nov. 3 election he lost. A recording emerged of Trump pressuring a top Georgia election official to overturn his loss in that state, as a core group of Republican legislators say they'll try to undermine the official electoral college vote in Congress on Wednesday.

• Markets ring in 2021 in style: Asian and European stock markets start off the year with record highs over optimism about vaccines.

• Niger massacre: Terrorist attacks over the weekend have killed at least 100 people in two villages in western Niger, just after first-round presidential election results were announced.

• Where is Jack? Chinese billionaire and Alibaba founder Jack Ma has made no public appearances in more than two months, raising concerns about his whereabouts following Beijing's recent crackdown on his business activities. 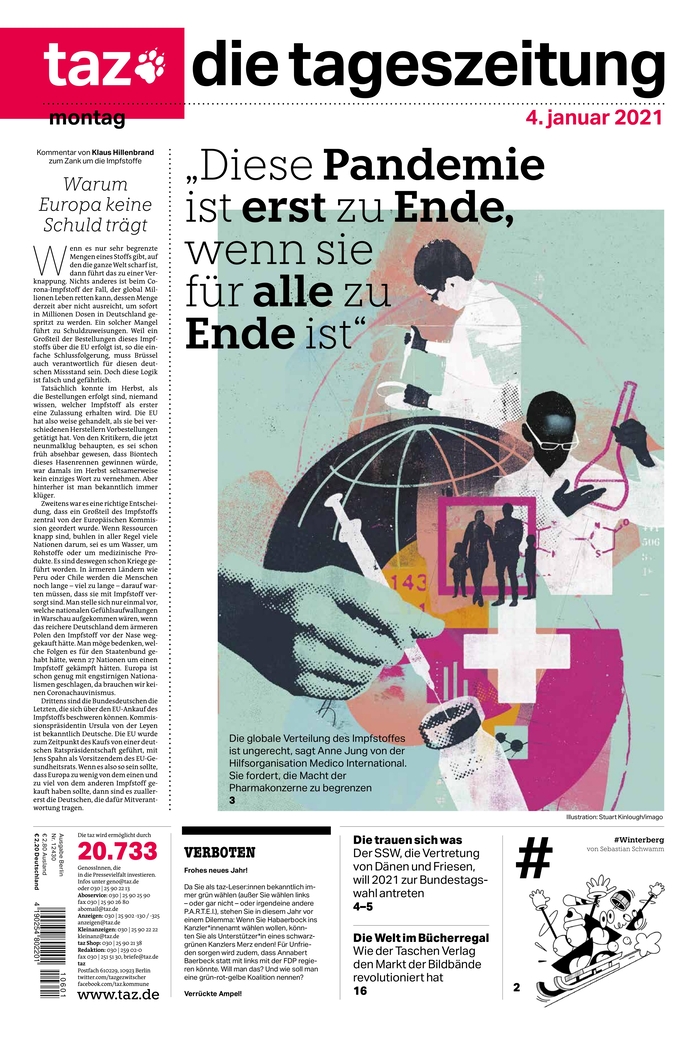 "This pandemic is only over when it's over for everyone," writes Berlin-based daily Die Tageszeitung on its Monday front page, pointing at the unfairness of the vaccine distribution across Europe.

IN PATRIARCHAL MOROCCO, A PUSH FOR "POSITIVE MASCULINITY"

Sufiane Hennani, a 28-year-old doctoral student in Casablanca, is using a series of podcasts dedicated to the debate on gender relations to help free his countrymen from one-size-fits-all notions about how men can and should behave, reports Ghalia Kadiri in French daily Le Monde.

Although violence against women is regularly denounced in the kingdom, the role of men is rarely questioned. That's where Hennani's show, called Machi Rojola, comes in. Developed during the coronavirus lockdown period — at a time, specifically, when associations have observed an upsurge in domestic violence — the podcasts directly target sexual assault, harassment and male domination. The idea, its creator explains, "is to deconstruct the discourse of men, to make them responsible, in order to initiate change in our society."

Each program, illustrated by the feminist artist Zainab Fasiki, invites intellectuals, artists and activists to reconsider the notion of masculinity. "In Morocco, we think of man as if there was only one model: the hegemonic dominant male. Anyone else is considered not 'man enough,'" Hennani says. "In Machi Rojola, we finally admit that masculinity is plural, that it's complex."

The first episode, released on Dec. 2, tackles "toxic masculinities," and the notion of "being a man," which sometimes leads to violence. "Since we were children, we have been taught models of masculinity that have caused us a lot of harm," author and journalist Hicham Houdaïfa says. "We had to show that we were boys. Sometimes you become violent because you have to be." It is this notion that Sufiane Hennani wants to challenge.

275,800
According to South Korea's interior ministry, the country has registered more deaths than births for the first time ever in 2020, with 275,800 babies born this year against 307,764 fatalities — a worrying sign in a country which already has the world's lowest birth rate.

— The Washington Post has published details of a phone call between Donald Trump and Georgia Secretary of State Brad Raffensperger in which the U.S. president pressures the top election official to "find" votes to overturn the results of his Nov. 3 loss to Joe Biden.

There are more and more elected leaders these days willing to ride roughshod over the rules of de...