Skiing in central Madrid, Spain, after the country was hit by snow storm Filomena, which brought the heaviest snowfall in 50 years, killing four people and bringing central Spain to a standstill - Dyd Fotografos/Action Press/ZUMA
WORLDCRUNCH
2020-01-11

Welcome to Monday, where impeachment looms for Trump, a new COVID strain is identified in Japan, and cases spike in China to the highest level in five months. Also, find out what made sharks' ancestors even scarier ...

On one of the final Fridays of 2020, I passed through the Malmö airport customs and underwent that subtle metamorphosis from The Swede to a Swede. This crossing from the definite to the indefinite is familiar to all returning expats, and its downside (deflated exceptionalism) and perks (nostalgia, familiarity) are felt at the first native exchange, and then sporadically with depreciating force — until, if you stay long enough, you're once again part of the herd.

At this year's homecoming however, the usual reassimilation also included a new adjustment: to a country that had lost its international shine. Yes, Sweden is still perceived abroad as exceptional. But this past year, the government's refusal to impose rules to restrict contact to combat COVID-19 led to a death toll higher than all of the country's northern European neighbors combined. By flirting with a strategy of so-called "herd immunity," decades of reverence for the Swedish model of common sense and social protection has steadily turned from doubt to outright disdain.

After the baggage carousel and two successive cigarettes on the rain-and-wind swept platform (there is zero fluctuation in these regional weather conditions for eight months of the year), I ended up on a bus splashing its way closer to Sweden's forested and somber middle, towards a somber two-roomer my dad (Gunnar) calls home.

Ever worry about your country's reputation? Ever participated in sullying it? Arriving home prompted some fleeting guilt for having criticized the government's pandemic response in conversations with friends in France and articles I'd written in English. But as we rumbled northward on this crowded and humid regional bus, and as the sniffling and coughing multiplied, I verified that I was the sole mask-wearer on board. No, Sweden's laissez-faire strategy was a train wreck, and it was right to call it out.

"Sure, there's some international schadenfreude too, no doubt." Gunnar landed in his oversized brown armchair. "And," firing up his pipe, "Who can blame them. Passing judgment from the sidelines is always risky business."

I'd had that national reputation discussion a few weeks back, in another living room back in Paris. "Fucking easy for you to say!" Ryan, my former college roommate and a U.S. military vet, was barking at my computer screen, where I had cued up a 1972 clip of Swedish Prime Minister Olof Palme condemning the Vietnam War. From the other side, Ryan was making Gunnar's point. Sweden was at the height of its international standing in the 1970s, when students from all over the world were shipped to the freshly remodeled Stockholm suburbs to witness our welfare utopia. My father's generation had the luxury of being engaged, but not involved in, the troubles of the outside world.

"In a way," Gunnar continued, "we became the world's conscience … a humanitarian superpower, if you will. But we never had to make the impossible decisions — Vietnam, 9/11 — of an actual superpower."

That was then. Now Sweden faces its own war, on home turf, and needless casualties are piling up. That a new emergency law went into effect Sunday, granting the government the power to impose coronavirus-related curbs for the very first time, only highlighted how wrong-headed the government's policy has been until now. Of course, the undoing of our folkhem (welfare state) and Sweden's global influence started long before our government decided to bet on herd immunity. But there's no denying that the glory days left a stubborn residue of what was a very healthy self-imagery. Bidding farewell to father and fatherland, I wonder where we'll be once COVID-19 is behind us: What will it mean to be a Swede? How will it feel to be The Swede?

• Capitol riot aftermath: Donald Trump faces imminent prospect of becoming the first president ever impeached twice ahead of what is sure to be another turbulent week in Washington. House Speaker Nancy Pelosi announced the House will call on Vice President Mike Pence to invoke the 25th Amendment to remove the president through an executive branch procedure never before applied — failing that, the Congress will quickly proceed with impeachment. Trump, who's been banned from social media, has been silent for four days — though First Lady Melania Trump released a statement early Monday condemning the violence but also lashing out at her critics.

• COVID-19 latest: A new coronavirus variant has been identified in Japan. This third strain has been detected in four travelers from Brazil's Amazonas state. It would differ from the two other variants from Britain and South Africa, known to be highly infectious. China registers the highest daily jump in new cases in over five months, prompting a new lockdown in Beijing.

• Indonesian plane crash: Indonesia authorities have announced recovery of the two black boxes from Sriwijaya Air Flight 182, which crashed Saturday into the ocean with 62 people on board.

• New West Bank settlements: Israeli Prime Minister Benjamin Netanyahu pushes ahead construction of some 800 homes for Jewish settlers in the occupied West Bank. The announcement comes just before the Jan. 20 arrival in the White House of Joe Biden, who opposes new settlements.

• Kyrgyzstan elections: Frontrunner Sadyr Japarov is set to win Kyrgyzstan's presidential elections by a landslide, with partial results showing him with almost 80% of votes. The country has been in a political crisis since parliamentary elections' results were disputed last October, leading to protests and the resignation of then-President Jeenbekov.

• Facebook shuts Uganda accounts: Facebook has taken down several fake and duplicate accounts in Uganda belonging to government officials accused of seeking to manipulate public debate ahead of this week's presidential election. 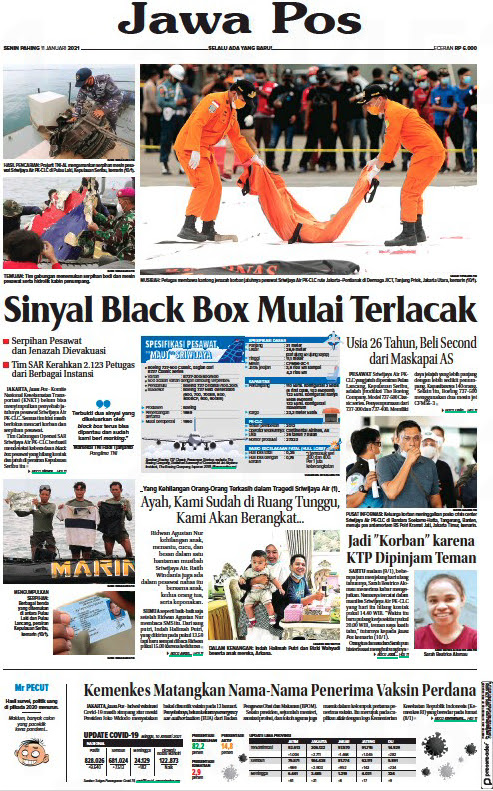 "Black boxes signal gets traced", titles Indonesian daily Jawa Pos, alongside a picture of rescuers recovering bodies of victims from the wreckage of Sriwijaya Air Flight 182, which crashed shortly after its departure from the country's capital city Jakarta.

Five days after the world witnessed unprecedented scenes of violence as thousands of pro-Trump supporters stormed the U.S. capitol, the country is grappling with the consequences of the assault that left five dead.

A SECOND IMPEACHMENT?
Democrats are pressuring Vice President Mike Pence to invoke the 25th Amendment, which would declare President Trump unfit for office. If Pence doesn't respond within 24 hours, the House will move to impeach him on charges of inciting insurrection. "As the days go by, the horror of the ongoing assault on our democracy perpetrated by this President is intensified and so is the immediate need for action," House Speaker Nancy Pelosi wrote in a letter to her Democratic colleagues. In an interview with 60 Minutes, she warned about the risk that Trump could pardon his supporters who stormed the Capitol.

BIDEN'S PRESIDENCY
Even if the Democratic-controlled lower house swiftly impeaches Trump, two-thirds of the Senate must vote to convict him. While such a trial would shine the spotlight on Republican senators, the situation also creates serious problems for President-elect Joe Biden. Current Senate Majority Leader, Republican Mitch McConnell, has already ruled out a vote before the Jan. 20 inauguration. A Senate trial afterward, which could lead to banning (the future ex-President) Trump from ever holding office again, threatens to complicate the beginning of Biden's presidency. Speaking on Sunday to CNN, House Majority Whip, Democrat James Clyburn, suggested delaying the transmission of the articles of impeachment to the Senate to trigger the process of a trial to avoid Biden's "first 100 days" being dominated by debate over his predecessor.

TWEETING NO MORE
Over the past 72 hours, Trump has essentially been banished from the Internet. His false and incendiary posts on Twitter and Facebook have earned him permanent bans from the two biggest social networks, which had been key to his communication strategy. But also Parler, the smaller network favored by staunch Trump supporters because it doesn't moderate his posts, was essentially shut down when Google and Apple both removed it from their app stores, while Amazon.com shut off its web services. Still, the moves by the tech giants didn't sit well with many, including critics of the president. "We understand the desire to permanently suspend him now," Kate Ruane, a lawyer for the American Civil Liberties Union, wrote in a statement on Friday. "But it should concern everyone when companies like Facebook and Twitter wield the unchecked power to remove people from platforms that have become indispensable for the speech of billions — especially when political realities make those decisions easier." French Economy Minister Bruno Le Maire went further, telling France Inter radio this morning that he was "shocked" that the social networks could take such action: "The regulation of the digital [space] can't be carried out by the digital oligarchy itself. The digital oligarchy is one of the threats that weighs on our nations and our democracies."

RIOTERS PAST (AND FUTURE)
A Nashville bartender and a retired U.S. Air Force from Texas officer pictured carrying plastic zip tie handcuffs during the storming of the U.S. Capitol were arrested Sunday. Another rioter who wore a "Camp Auschwitz" sweatshirt was identified as a Virginia man, as FBI-led efforts to track down individuals from the Jan. 6 mob continue following the arrests of several prominent far-right figures. AP reports that so far, at least 90 people have been arrested on charges ranging from misdemeanor curfew violations to felonies related to assaults on police officers, possessing illegal weapons and making death threats against House Speaker Nancy Pelosi.

-72.7%
Heathrow is reporting a 72.7% drop in passenger numbers, with just 22.1 million people flying through the west London international airport last year, down 58.8 million compared to 2019.

Over the past 30 years, corruption has taken root in our country in almost every area of our life — from now on, we will not tolerate such outrageousness.

MALMÖ — On one of the final Fridays of 2020, I passed through the Malmö airport customs and ...