Welcome to Friday, where the hundreds of kidnapped Nigerian students have been freed, Russia has been banned from the Olympics and French police have made a high-profile arrest in the Jeffrey Epstein sex trafficking probe. We also follow Yemen's itinerant honey producers as they (and their bees) dodge the stings of the country's ongoing civil war.

In a time of public impatience and online mobilization, Latin American governments are feeding frustrations with an outdated approach to political leadership, writes Gonzalo Sarasqueta, a lecturer at the ESAN business school in Lima, in America Economia.

Latin America is shaking. Peru has had the most recent flareup in a region heaving with discontent. Since last year, the streets of Santiago, La Paz, Quito, Buenos Aires, Bogotá and Mexico City have all gone aflame with indignation. And while each country has its own particular gripes, there are also certain institutional, social and political trends that may help explain these complex, multi-faceted convulsions.

To begin with, a large body of citizens feels their representatives are not defending their interests. As November's rioting in Lima showed, a good many Latin Americans do not see their demands shaping public policies. There is a significant breach between their expectations and the performances of their political leaders, regardless of ideology. Indeed, there are examples on both the right and left of governments failing to manage these sensitive scenarios.

The public is now better equipped, technologically, in terms of self-organization. Networking sites work as an escape valve for accumulating malaise, but also as a platform to organize and then act collectively. We are seeing hybrid social energies here, with online activism and strengthened presence outside. These dissenters know they are many. They feel it and, above all, communicate it in both spheres: online and offline.

As can be expected, regional democracies assure, to greater or lesser degrees, freedoms of speech and association.The problem, however, is that they lack the resources and leadership to turn this collective ire into new, regulatory norms to improve people's lives. In other words, our organizational system assures us the right to protest, but offers no solutions. This gap, besides exposing the system's flaws, feeds more discontent among people who feel they are ignored at the top.

The Greek researcher Zizi Papacharissi terms these disruptive groups "affective publics." They are typically transitory, intensive and spontaneous. The speed at which they throw up issues like transparency or gender equality are problematic for the institutional architecture of democracies, which is functioning in 'analog' mode. Add to this the tensions of a prolonged pandemic period, and there is a clear sense of politics stuck in another time.

Yet the problem goes beyond mechanisms or resources. Latin American leaders are stuck in the electoral loop, with campaign thinking engulfing all their activities. All their proposals, pacts and timing are conceived in anticipation of the next elections. Our politicians do not see citizens so much as voters, for whom they concoct "winning" narratives. Meanwhile, the mid and long-term transformations the country needs can wait. It is the rule of now.

Sometimes, this gap between people and their representatives is filled by actors from outside traditional politics. They present themselves as the immediate solution to the crisis, and end up exacerbating problems with their two-sided, shortsighted and extremist rhetoric. In doing so, they inject more instability into weakened systems, and destroy the few points of consensus that existed on resolving problems.

The pandemic, in the meantime, has hastened the transition from "tele-democracy" to "digital-democracy." That will create challenges in Latin America in areas like decision-making, representing complex social fabrics and accessing new technologies. Renovation has become an imperative, which means renewal of institutional substance, and not just form. The future won't wait. Nor will those who feel left out.

COVID-19 latest: Following last week's European summit, EU leaders are self-isolating after French President Emmanuel Macron tested positive with symptoms of a fever and cough. Meanwhile, South Korea is reporting a virus surge, and the U.S. is set to approve its second vaccine, from Moderna, the Massachusetts-based pharmaceutical company.

Paris train attack trial: The terrorist who opened fire on a train from Amsterdam to Paris in 2015 has been sentenced to life in prison.

Russian Olympics ban: Russia has been banned from the next two Olympics as punishment for state-ordered tampering of doping testing labs. Russian champions not implicated in doping will still be able to compete as "neutral athletes." 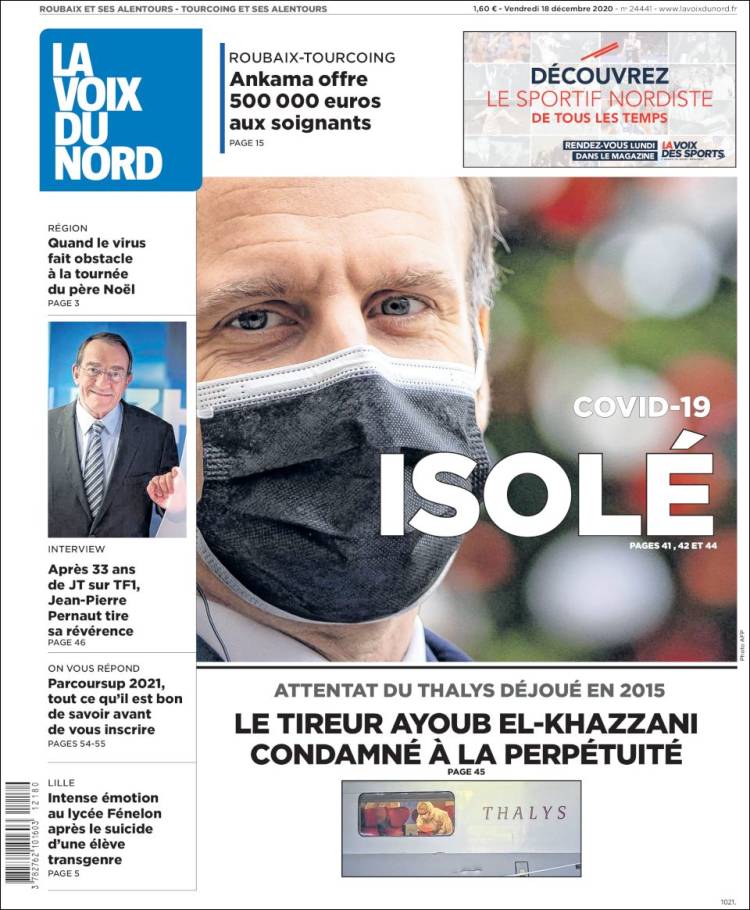 Yemen's itinerant beekeepers must follow the flowering season. But this nomadism, essential for their bees to produce this liquid gold known around the world, is hampered by the nation's ongoing civil war, writes Louis Imbert in French daily Le Monde.

In war-torn Yemen, with its endless checkpoints and occasional explosions, no one travels as much as the beekeepers — migrating with their hives, chasing the flowers. Honey is a serious business in Yemen. In this sparsely industrialized country, with its dizzying winding mountain roads, this liquid gold is reputed to be one of the best in the Middle East, if not the world.

The beekeepers stay up-to-date with the situation of the war's front lines by way of WhatsApp groups. There is a very strong community spirit in this trade. Beekeepers travel in pairs or trios, but they need to talk to everyone else to find out where flowering is good, whether rain is causing flooding in the valleys, and where it's okay to congregate since the bees circulate between the hives.

Now throughout Yemen, men are leaving the cities, where jobs are scarce, to become farmers and beekeepers. "The market is flooded and our bees don't have enough to eat," says beekeeper Saïd Al-Aulaqi. Prices have fallen by one third since the beginning of the conflict in 2015, according to merchants in Atak. He now sells his production at 200 Saudi riyals per kilogram (44 euros), while better quality honey can be exported to Saudi Arabia at up to 130 euros per kg.

They would have probably finished the job.

— Vladimir Putin laughed off a question about the involvement of Russian agents in the poisoning of activist Alexei Navalny, during the Russian president's annual press conference. He confirmed however that intelligence agents had been tracking the opposition leader's movements across the country at the time.

Navalny v. Putin: A Point Of No Return For Russia?

The attempted assassination and subsequent arrest of Alexei Navalny, and accusations of state cor...