NEW DELHI — Nothing demonstrates the arrogance of Israeli settler colonialism more than the periodic killing, every few years, of hundreds of Palestinians in Gaza by its bombs and missiles.

Leading Israeli politicians and military leaders are fond of describing this brutal violence as "mowing the lawn," as if Palestinian people are noxious weeds that need to be cut ever so often. "Mowing the lawn" is a nakedly political act meant to repress and suppress the non-Jewish population of territories like Gaza or the West Bank that are under de facto Israeli control.

"Israel has the right to defend itself," says U.S. President Joe Biden, who knows full well the profound asymmetry of military power between Israel and each and every one of its potential adversaries. The choice of words is clearly meant to justify brutal actions by Israel against Palestinians who live under occupation.

The trigger for the current conflict is widely acknowledged to be the threats of eviction of Palestinian families from their homes in the Sheikh Jarrah neighbourhood of East Jerusalem. This was followed by the Israeli police using tear gas and stun grenades on worshippers in the al Aqsa mosque on the holiest day of Ramadan. This provoked Hamas militants in Gaza to fire rockets into Israel, most of which were successfully countered by the Israeli "Iron Dome" system. Then came the aforementioned "lawn mowing," i.e., the Israeli artillery and aerial assault on Gaza.

When the cease-fire took hold, 12 people had died inside Israel, two of whom were ironically Palestinian Arab citizens of Israel and one a domestic worker from Kerala. In contrast, the UN estimates that 270 died in Gaza, 68 of whom were children, many of whom were infants. This is deemed by Israel a "proportionate response," preserving an approximate ratio of 20-25 Palestinians killed for each Israeli life lost.

Amira Hass, one of the most perceptive commentators on Israel-Palestine affairs, writes in the Israeli newspaper Haaretz:

"The lethal Israeli bombings of the residents of the narrow and sealed Gaza Strip may be presented in Israel as a 'response,' but every Palestinian and also other sensible observers understand them as part of the century-long continuum in which one people takes over and expels, fragments, divides and crushes, while the other people refuses to give up its identity and homeland — so it is attacked time after time."

American support to Israel is usually couched in terms of the $3.8 billion military aid given every year. More insidious and hidden are the many hundreds of millions given in the U.S. in tax-exempt donations to entities that use the funds to finance the growth of settler colonialism.

"The settlement enclaves sprouting up across the area are supported by a constellation of corporations and nonprofits financed mainly through U.S. tax-exempt donations," says Tanya Wintman. In the case of Sheikh Jarrah and other East Jerusalem neighborhoods, one need only look at two such settler organizations, Nahalat Shimon and Ateret Cohanim…These tax subsidies and the activities they support — the ethnic cleansing and Judaization of East Jerusalem…subsidizes private provocateurs, settlement lobbies and multinational corporations sowing destruction in Gaza, the West Bank and East Jerusalem."

This relentless drive to create an Eretz (Greater) Israel with no defined boundaries finds its voice in the increasingly right-wing majoritarian Jewish Israeli population egged on by their political representatives. It is manifested in the Jewish mobs shouting "death to the Arabs" in mixed Jewish-Palestinian cities like Lod/Lydda.

The basic underlying cause is Israel's occupation of the Palestinian territories and its policy of apartheid not only in the areas conquered in 1967 but within Israel itself, west of the so-called Green Line.

In a recent op-ed in the New York Times of May 25, Palestinian lawyer Diana Buttu emphasises, "We Palestinians living in Israel ‘sub-exist,' living under a system of discrimination and racism with laws that enshrine our second-class status and with policies that ensure we are never equals. This is not by accident but by design."

These facts have been acknowledged by international organizations such as Human Rights Watch and the courageous Israeli human rights groups B'Tselem.

While the settler-colonial regime in South Africa was forced by international pressure to dismantle the ugly features of apartheid two decades ago, Israel defiantly refuses to do so and its patrons in the West, notably the U.S., remain complicit in its adamant rejection of international law and morality.

Most ironically, however, aspects of Israeli policies are being imitated in a country where one would have least expected it.

On August 5, 2019, the Modi regime in India, whose fervent adherents make no secret of their goal of transforming India into a Hindu Rashtra, abolished the statehood of India's only Muslim-majority state of Jammu and Kashmir, and read down Article 370 of the India's constitution that conferred special status to these territories. 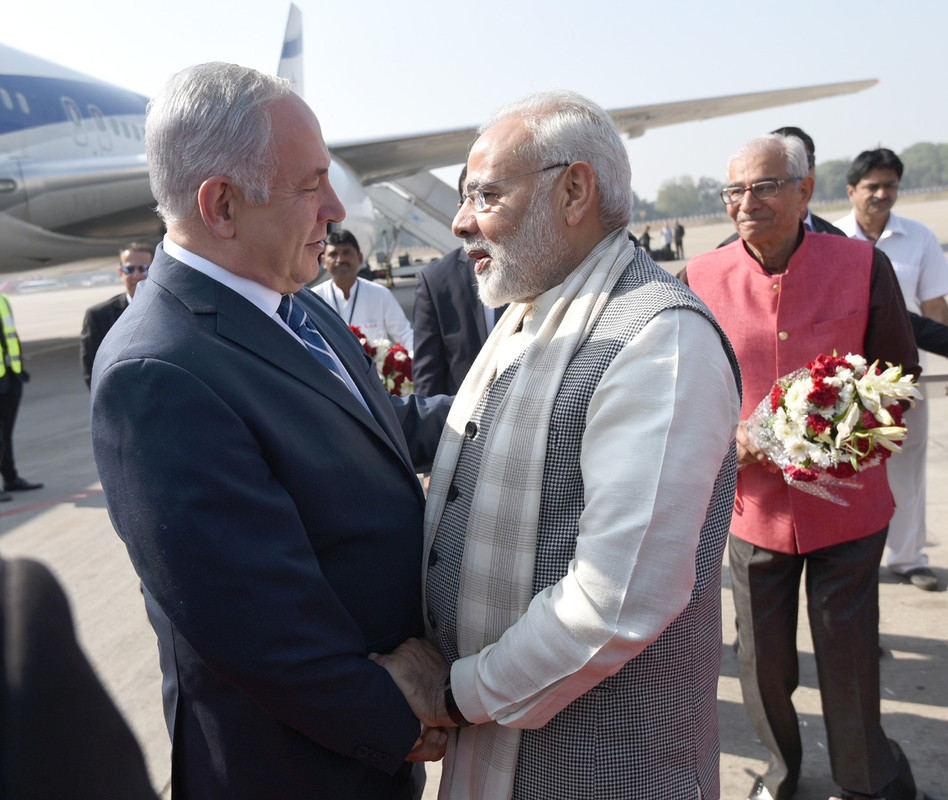 While several reasons have been advanced to explain why the Modi regime took this drastic step, one particular reason — a settler-colonial policy to change the demography of the area by settling Hindus from other parts of the country there — has received a fair amount of attention.

A number of laws have been passed to remove previous restrictions on acquiring land and property in the newly designated Union Territory downgraded from its previous status as a state. How feasible this attempt to foster settler colonialism is may be debated but this notion became more credible when it was explicitly mentioned by an official of the Indian government.

In November 2019, India's consul-general in New York was seen on video telling an audience at a private gathering about the changes wrought by the Indian government in Jammu and Kashmir. He referred explicitly to the actions of the Israeli government in facilitating Jewish settlement in the occupied West Bank and is reported to have said, "If the Israeli people can do it, we can also do it."

Any significant demographic alteration, if it occurs, would of course be done under the shadow of the Indian military in the most heavily militarized region in the world today. This, if it happens, would bear a strong similarity to the way the Israeli military facilitates Jewish settlers to appropriate land and terrorize the Palestinians living in the West Bank.

Where India stood before

Its diplomatic relations with Israel were limited to a consulate in Bombay for the purpose of facilitating the travel of Indian Jews to Israel while it established full diplomatic relations with the Palestine Liberation Organization and allowed it to open its office in New Delhi. Several factors were likely responsible for this situation, including India's emergence as a leader of the non-aligned bloc while Israel was firmly anchored in the western bloc, a position that was cemented when Israel joined Britain and France in imperial gunboat diplomacy: a military attack on Egypt in 1956 after Nasser nationalized the Suez Canal.

It is hardly any surprise that the Modi regime would take lessons in settler colonialism from Israel.

India's position could also have been influenced to some extent by Mahatma Gandhi's views on Palestine expressed in his paper The Harijan. Writing in 1938 when the Nazi atrocities against the Jews of Germany were accelerating, Gandhi said that Palestine belongs to the Arabs in the same sense as England belongs to the English and France to the French and it is wrong and inhuman to impose the Jews on the Arabs.

Gandhi described the Jews as "the untouchables of Christianity" and compared their treatment by Christians in Europe to that of untouchables in India by caste Hindus but then went on to remark:

"My sympathy for Jews does not blind me to the requirements of justice. It is wrong for Jews to enter Palestine under the shadow of the British gun…they are co-sharers with the British in despoiling a people who have done them no wrong."

Gandhi repeated this in July 1946 when he stated that Europe's Jews, "who have been cruelly wronged … have erred grievously in seeking to impose themselves on Palestine with the aid of America and Britain and now with the aid of naked terrorism." Gandhi's position, basically, was that the western world that had done little to save German Jews from destruction at the hands of the Nazis was trying to salve its guilty conscience by grabbing Arab land to settle European Jews in accordance with Zionist policy.

This position, like many other moral stances espoused by the Mahatma, has little appeal to the Hindutva groups, one of whose members assassinated Gandhi in New Delhi on January 30, 1948.

So, it is hardly any surprise that the Modi regime would take lessons in settler colonialism from Israel just as the Indian police and paramilitary bodies are reported to have received training from the Israelis in so-called "anti-terrorist" actions.

Meanwhile, Palestinians continue to live under the boot of the Israeli occupation. When periodic bouts of violence inevitably occur, Amira Hass, quoted above, reminds us, "It is only natural that Palestinians will want the Jewish military superpower to lose it and for the Israelis to know what fear is."

On the other hand, Israel can and does inflict violence on a vastly greater scale while the sight of Palestinian children killed and maimed and homes and schools destroyed that arouse feelings "of helplessness, rage and despair among every Palestinian…are sights that in the best case do not move most Israeli Jews, and in the worst case make them happy."

This is the arrogance and the reality of settler-colonialism that the Modi regime ostensibly wishes to imitate in Jammu and Kashmir.

*Vinod Mubayi is co-editor of the INSAF Bulletin.

Pandemic Pollution, And Our Philosophical Duty To Clean The Air

NEW DELHI — I had never given thought to the provenance of funeral wood, until news reports ...