BERLIN — Anyone caught writing about Chuck Norris should tread very carefully because, according to one meme, the Texas Ranger has threatened to switch off the Internet if he finds any more stupid jokes about him posted online.

This threat is not to be taken lightly: according to another post, the only reason why there is no longer life on Mars is that the Texas Ranger had once paid a visit.

The Chuck Norris jokes all follow the same pattern — that he is invincible and all-powerful. As one goes, when Alexander Graham Bell invented the telephone, he already had three missed calls from Chuck Norris. It’s claimed that the action star can even make a McDonald’s Happy Meal cry.

Similarly, Russian President Vladimir Putin’s power has grown more swiftly and extravagantly on the Internet than on the political stage. In 2013, Forbes magazine named him the most powerful man in the world, but the Internet has long been aware of the Russian president’s supernatural powers.

In one meme, Putin overcomes a brown bear that insulted him and rides it through shallow water. Another shows him in a church, wearing a dark suit and holding a candle. “Whose funeral is it?” someone asks him. Putin’s answer: “I haven't decided yet.” One picture notes that even Putin’s own shadow doesn’t dare turn its back on him.

Memes on the political stage

The word “meme” (applied these days to humorous images and accompanying text posted on the Internet) was first coined in 1976 by evolutionary biologist Richard Dawkins to describe ideas and thoughts that spread quickly. It derives from the Greek “mimema” — an imitation — and “gene.”

Not all Putin memes are easy to interpret at first glance. Some draw on the extensive meme culture that has sprung up in recent years. One shows Putin’s head on a portrait of a Russian tsar, with the slogan “Haters gonna die.” The phrase “Haters gonna hate” is one of the most popular memes and comes from American hip hop, but the Putin version suggests a sinister edge to the Russian president’s treatment of his critics.

The Putin memes are part of a trend that satirizes the carefully cultivated public images of politicians. One series of pictures shows Hillary Clinton answering texts from Barack Obama. “Hey Hil, whatchu doin'?” the president asks from his sofa. Clinton, sitting in a situation room and wearing dark glasses, coolly replies, “Running the world.”

Over the last few years, Putin has been carefully honing his image through ultra-macho photo opportunities, showing him kneeling beside a tiger that has been shot, flying south with young cranes or hunting in the Russian bush. Most people in the West simply laugh at Putin’s antics, but many don’t realize that the propaganda is highly effective in Russia.

Political leaders have always sought to control their public images. Most politicians across the world have small armies dedicated to the task. What’s worrying with Putin is that his attempts are bordering on the cult of personality so prevalent in fascist states of 20th century Europe. And despite their ironic exaggerations, the memes only strengthen this impression.

Irony has a tendency to work its way into the mainstream. A harmless example is the fact that many 21st century trends have their roots in ironic reinterpretations of 1970s and 1980s fashion. The mustaches, gold Casio watches and geek glasses started off as in-jokes among hipsters but quickly became so ubiquitous that they were normalized. The style remains without any trace of the original irony.

The same could be true of the Chuck Norris/Putin comparison. Although jokes about the action star’s omnipotence are tongue-in-cheek, Putin truly does wield massive power. The eternal Texas Ranger is only threatening to switch off the Internet, but Putin has already shut off a large part of the Russian press. 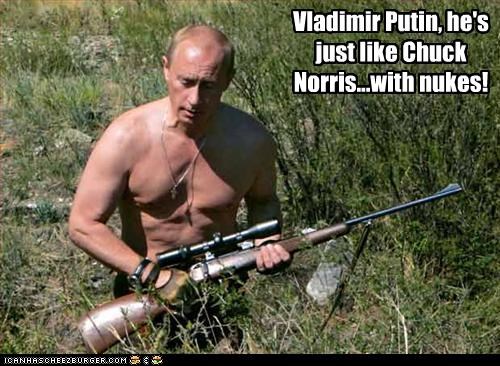 A few days ago, the chief editor of the formerly critical website lenta.ru was fired, and a personnel reshuffle was initiated. Putin ensures that he has the media under his thumb, and the pro-government media’s reports on the situation in Ukraine are more propaganda than journalism. A few weeks ago, Russian television aired images purporting to show a crowd of Ukrainian refugees on the Russian-Ukrainian border. The pictures were actually taken from Ukraine’s border with Poland.

In reality, Putin is already one step ahead of action star Chuck Norris. On a visit to Korea at the end of 2013, World Taekwondo Federation leader Choue Chung-won awarded the Russian president a black belt, the ninth and highest rank in the sport, that conferred grand master status on Putin. The Russian president was only in Korea to lobby for a new railway line, and while it is well known that he practices judo, there has never been talk of him training in taekwondo. Accomplished martial artist Chuck Norris has still only reached the eighth rank in taekwondo. Perhaps the only thing that could now rob Putin of his mythical aura would be a straight fight with the Texas Ranger.

In Moscow daily Kommersant, a long and fiery response from Russian Foreign Minister Sergey Lavrov to the U.S. and European tactics during and after this month's Putin-Biden summit.

The Russian president's article on the 80th anniversary of Nazi Germany's attack on the Soviet Union can be read on multiple levels. But one thing is sure, his mind is fixed on the future.